During the latter half of 1976 the Editors of Finance & Development conducted a readership survey to find out more about their readers. Despite the difficulties of getting mail rapidly to and from an international readership, a large number of our readers returned our completed two-page questionnaire.

A sample of about 5,000 names was randomly selected from the roughly 108,000 readers on our English, French, and Spanish mailing lists kept on computer file in Washington, D.C. Each recipient was sent a two-page questionnaire and an international reply coupon which could be exchanged for postage in order to return the completed form. A response rate of 50 per cent was achieved, based on corrections made for mailing difficulties from some parts of the world. There was no follow-up mailing. A cutoff date was set at about eight weeks after the mailing out of the questionnaires.

For purposes of analysis, the readership was subdivided into three groups of countries: United States and Canada, Other IDA Part I countries, and Rest of the World. (International Development Association Part I countries—Australia, Austria, Belgium, Canada, Denmark, Finland, France, Federal Republic of Germany, Iceland, Ireland, Italy, Japan, Kuwait, Luxembourg, Netherlands, New Zealand, Norway, South Africa, Sweden, United Kingdom, and United States.) The percentile breakdown of the readership for these three groups and a more common geographical breakdown are given below (percentages may not always total 100 due to rounding).

The readers are divided into three major categories as follows:

The readers who represent institutions are further subdivided into the following categories by per cent:

The individual professionals are subdivided in the following groups by per cent (students represent 12 per cent of the total readership):

Students are included in nonrespondents.

Students are included in nonrespondents.

Respondents were asked to evaluate the thoroughness with which they read the magazine by quantifying their answers. Here are their responses as a per cent of the readership. There are normally eight articles in every issue:

The results of the survey will be used to guide future editorial policy and management actions, with the hope of producing a magazine which fulfills the needs of its readers and presents the work of the two institutions that it represents jointly.

The System Under Stress

Problems of the international monetary system have been among the leading economic issues in the past decade, and there has been an increased interest in the International Monetary Fund. This history describes these problems and the Fund’s evolution in the six very important years 1966 through 1971.

Volume I, Narrative, traces in detail the negotiations leading to the creation of a new reserve asset, commencing with the earliest discussions of international liquidity and culminating in the establishment in the Fund of a facility based on special drawing rights (SDRs). It goes on to describe the heavy recourse to the Fund’s financial resources by its members, especially in 1968 and 1969, the expansion of quotas in 1970, and significant changes in the Fund’s policies regarding the use of its resources, including the development of “financial programming.”

Another major section of Volume I explains the onset in the late 1960s and early 1970s of severe crises in gold markets and in exchange rates that eventually resulted in the breakdown of the world monetary system established at Bretton Woods. Here, the narrative begins with the devaluation of sterling in November 1967 and ends with the Smithsonian agreement in December 1971.

A final section explains how the Fund grew and changed as an international institution, taking on a number of new responsibilities and activities, primarily in the fields of technical assistance and training.

Volume II, Documents, makes available for the first time seven draft outlines of reserve-creating schemes that were prepared in the Fund as part of the process by which SDRs were established, and includes also the most important documents that the Fund published from 1966 until the end of 1971.

These volumes are a sequel to three volumes published earlier, which covered the origin and the first twenty years of the Fund’s existence, from 1945 to 1965.

(or the equivalent in most other currencies)

Book from the World Bank and The Johns Hopkins University Press

Although economists have long discussed the merits of relating prices to the marginal or incremental costs of supply in electrical utilities, the idea has been slow to win acceptance. Most of the industry’s engineers, accountants, financial analysts, and administrators do not understand marginal cost pricing, and many hold notions about the aims and equity of tariffs that differ markedly from those of economists.

Of concern to both economists and engineers—and as relevant to industrialized as to developing countries—Electricity Economics applies economic analysis to electricity pricing in a practical way. Case studies analyze the structure of marginal costs and translate them into possible tariffs. Other chapters take up in more general terms some principles of tariffmaking and investment. While accepting the importance of revenue requirements and equity, the authors also stress efficient allocation of resources. Chapters that focus on investment also offer a well-balanced mix of principle and practice. The authors include a survey of the appraisal of rural electrification projects and studies of optimal system planning techniques, as well as theoretical studies on pricing and investment that cover risk and indivisibilities.

Unskilled labor is one of the most abundant resources available in poorer countries and one that is drawn on heavily to further economic development. The cost of this labor is therefore an important factor in the choice and design of development projects. But how can this cost be determined? The market wage frequently used does not represent the true cost to the economy. The economic price (or shadow wage) is likely to be more accurate, but the methods for deriving it have in the past been too crude or too abstract to be useful.

Focusing on the problem of estimating the economic cost of unskilled labor, this study first examines the labor market conditions that cause a significant spread between the economic and market wages. Other determinants of economic wages are also discussed—the intensity of employment, the relative cost of labor and capital, indirect costs and benefits—with special attention to the effect of fiscal and monetary policies. Formulations for the economic pricing of labor are then tested by applying them to four developing countries, Korea, Taiwan, Indonesia, and the Philippines. Although only countrywide data are available, the author contends that the results can be modified for local conditions and specific projects.

The Philippines: Priorities and Prospects for Development

Since independence in 1946 the Philippines has experienced satisfactory economic growth, but the country lacks a basis for continuing, long-term development; distribution of the benefits of growth remains unequal; and the rate of growth cannot be maintained without change in the patterns of growth. This report analyzes the policies adopted by the government in the early 1970s and makes projections for the coming decade to test the feasibility and consistency of the policies. The basis for the expected structural changes is a substantial increase in investment, both public and private, to move the economy toward sustained growth of incomes and employment and a more acceptable distribution of wealth.

Korea: Problems and Issues in a Rapidly Growing Economy

The phenomenal economic progress of the Republic of Korea during the past decade is one of the outstanding success stories in international development. Despite a lack of natural resources, Korea has made the transition from a largely agricultural society into a semi-industrialized country in a relatively short time. This book traces this impressive industrial growth and discusses the issues that Korea’s five-year plan for 1977-81 must try to resolve.

The Mining Industry and the Developing Countries. Rex Bosson and Bension Varon. From Oxford University Press.

The books described above are available through booksellers or from The Johns Hopkins University Press, Baltimore, Maryland 21218, U.S.A. or 2-4 Brook Street, London W1Y-1AA, England. 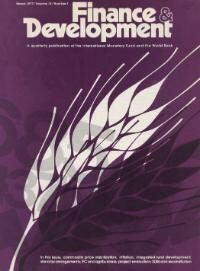