This article describes a new form of assistance to developing countries facing balance of payments difficulties. Financed by profits from the sale of one sixth of the gold held by the IMF, which has already begun, and any voluntary grants, loans, or investment income received by it, the Trust Fund is expected to start making disbursements in January 1977.

This article describes a new form of assistance to developing countries facing balance of payments difficulties. Financed by profits from the sale of one sixth of the gold held by the IMF, which has already begun, and any voluntary grants, loans, or investment income received by it, the Trust Fund is expected to start making disbursements in January 1977.

In the aftermath of the sharp increase in oil and other prices, it was generally recognized that the low-income developing countries would be the most seriously affected and that special steps needed to be taken at the international level to assist them in financing their essential import requirements. One such step was the United Nations Emergency Operation which was set up in 1974 to render emergency assistance for one year; it has now been succeeded by a UN Special Fund which is designed to provide aid to the most seriously affected and other low-income countries. At the IMF an oil facility was created in 1974 to meet a part of the increased cost of importing petroleum. The facility was continued in 1975 and a Subsidy Account was established to afford interest relief on drawings from the 1975 facility by the most seriously affected developing countries. The UN Emergency Operation has allocated US$263 million in grants, while the two IMF oil facilities have provided SDR 2.5 billion (the equivalent of approximately US$3 billion) in loans to developing countries.

In view of the continuing pressing needs of the low-income developing countries, the Joint Ministerial Committee of the Boards of Governors of the Bank and the Fund on the Transfer of Real Resources to Developing Countries (the Development Committee), after meeting in Washington in January 1975, invited the Executive Directors of the Bank and the Fund to study the desirability of creating a Special Trust Fund to provide highly concessional resources to help meet the balance of payments needs of such countries in the period immediately ahead. In their report to the Development Committee, the Executive Directors recognized that, even with greater effort on the part of the low-income developing countries to mobilize domestic resources and to expand their exports, their balance of payments positions would remain under severe strain for several years beyond 1975. They therefore agreed that there was a need to make additional financial resources available to these countries on appropriate terms. They recommended that, if resources additional to those currently available to developing countries through other channels could be obtained, consideration should be given to establishing a Special Trust Fund, to be administered by the IMF, to render highly concessional balance of payments assistance. However, it was noted that there was great uncertainty as to whether sufficient financial support could be expected. One of the suggestions made was to use, directly or indirectly, some of the gold holdings of the Fund. After considering this report, the Development Committee agreed to urge the Executive Directors of the IMF to consider all aspects of the establishment of such a Trust Fund, as well as to continue their study of all possible sources of financing. The next major advance toward the creation of a Trust Fund came in August 1975 when the Interim Committee of the Fund’s Board of Governors decided, as part of the agreement on the role of gold in the future international monetary system, that the profits from the sale of one sixth of the IMF’s gold holdings (25 million ounces) should be used for the benefit of developing countries. Meeting shortly thereafter, the Development Committee agreed in principle that the profits from these gold sales should be used to establish a Trust Fund. At the meetings of the Interim Committee and the Development Committee held in Jamaica in January 1976, an understanding was reached to ask the Executive Directors of the Fund to establish without delay a Trust Fund financed by profits from these gold sales, to be augmented by voluntary national contributions.

It was agreed that the gold should be sold over a four-year period and that, initially, member countries with per capita incomes in 1973 of less than SDR 300 would be eligible. The operational details were worked out over the next few months, the decision to establish the Trust Fund was taken by the Executive Directors on May 5, 1976, and the first of the 16 gold auctions planned over the first two-year period was conducted on June 2. Although the profits actually realized will depend on market developments as the gold is auctioned at intervals of about six weeks, it has been estimated that these profits might approximate US$500 million a year.

The operations of the Trust Fund will be divided into two distinct two-year periods beginning July 1, 1976 and July 1, 1978. The amounts available for disbursement by the Trust Fund during each period will include the profits from one half of the total gold to be sold, as well as any voluntary national grants or loans and any investment income received by the Trust Fund during that period. These resources available for lending during each period will be allocated to eligible members in proportion to their Fund quotas on December 31, 1975. Although the total resources available for lending will not be known until the end of each period, regular interim disbursements will be made in order to provide timely assistance, with the first disbursement expected around January 1977.

Sixty-one low-income countries are included in the initial list of eligible members. The Executive Directors will review this list and the criteria for eligibility before the beginning of 1978. If all 61 countries were to qualify for assistance, India, with the largest quota, would be entitled to borrow 25 per cent of the Trust Fund’s resources, to be followed by Indonesia, Pakistan, and Egypt, with entitlements to borrow 6.9, 6.3, and 5.0 per cent of the Trust Fund’s resources, respectively.

In order to qualify, an eligible member must establish that, for a 12-month period, it has a need for balance of payments assistance and is making a “reasonable” effort to strengthen its balance of payments position. For assistance during the first phase of the Trust Fund’s operations, the relevant 12-month period must begin between January 1, 1976 and December 1, 1977. The need of a member will be assessed on the basis of the member’s balance of payments position, its reserve position, and developments in its reserves. In determining a reasonable effort, the IMF will adopt the same criteria as are applied to purchases in the first credit tranche.

If a member has submitted a 12-month program in connection with a use of Fund resources in the credit tranches or under the extended Fund facility, that program will qualify as the basis for Trust Fund assistance. Other members may qualify by submitting a program which would meet the criteria of reasonable effort, and, as in the case of first tranche purchases, discussions on the program will normally include a staff visit to the member country. The calculated need for assistance may be cumulated over more than one 12-month program during each phase of the Trust Fund’s operations. Once the final list of qualifying eligible members has been established, the funds available during each two-year phase of the Trust Fund’s operations will be allocated on the basis of the proportional quotas described above.

Although the criteria and mechanism for allocating Trust Fund loans have been established, the actual amount of money available for lending will not be known until near the end of each two-year period. During each period, 12.5 million ounces of gold will be sold. However, until the current Articles of Agreement are amended, the Fund itself can only sell gold to member governments to replenish its supply of currencies needed in its operations, and it can only sell that gold at the official price under the Articles of SDR 35 a fine ounce. To facilitate the establishment of the Trust Fund before the second amendment of the Articles is approved, agreement has been reached whereby the IMF will sell gold to major central banks at SDR 35 a fine ounce and those banks, in turn, will sell the gold to the Trust Fund at that official price. The Trust Fund, a separate legal entity from the IMF, can then sell the gold in public auctions.

It is hoped that, in addition to these profits from the gold sales, the Trust Fund will also receive a number of voluntary contributions from member governments. While no formal commitments have yet been received, spokesmen from some countries have indicated that such contributions might be forthcoming. It is also hoped that regional and other funds might consider loans or contributions to the Trust Fund as an effective way to provide assistance to the most needy developing countries.

The value of loans granted by the Trust Fund will be expressed in terms of SDRs. The loans will carry an interest charge of ½ of 1 per cent per annum and, after a grace period of five years, will be repayable in equal semiannual installments terminating with a final payment ten years after the initial disbursement. These installments may be rescheduled if the IMF finds that repayment on the due date would result in serious hardship for the member.

Before January 1, 1978, the IMF will review the Instrument establishing the Trust Fund and may, at that time, modify the list of eligible countries, the need and reasonable effort criteria for assistance, and the terms and conditions governing loans from the Trust Fund. The IMF may decide that any modification which is favorable to eligible members will apply retroactively. 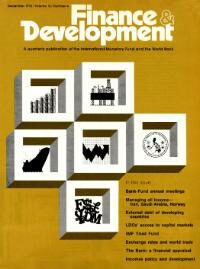