This paper discusses events related to creation of the IMF. The paper highlights that representatives of 45 countries met at Bretton Woods, New Hampshire, a summer resort in the northeastern part of the United States, to prepare the final texts of the Articles of Agreement of the IMF and of the International Bank for Reconstruction and Development. The paper also discusses activities of the IMF in Latin America, highlighting that the Latin American countries offer a rich variety of economic experience, ranging from examples of financial stability and sustained economic growth to chronic difficulty or acute crisis.

This paper discusses events related to creation of the IMF. The paper highlights that representatives of 45 countries met at Bretton Woods, New Hampshire, a summer resort in the northeastern part of the United States, to prepare the final texts of the Articles of Agreement of the IMF and of the International Bank for Reconstruction and Development. The paper also discusses activities of the IMF in Latin America, highlighting that the Latin American countries offer a rich variety of economic experience, ranging from examples of financial stability and sustained economic growth to chronic difficulty or acute crisis.

THROUGH the first half of this year, developing countries continued to make greater use of the Fund’s resources, in proportion to their quotas, than advanced industrial countries, while deutsche mark and French francs played a leading role in drawings and repayments. The volume of the Fund’s operations was greater than in any January-June period since 1957, and the $365.8 million excess of drawings ($581.4 million) over repayments ($215.6 million) contributed to the $1,835 million total of drawings outstanding at the middle of the year.

Of the Fund’s $15.6 billion of quotas, 63 per cent are maintained by a group of ten industrial countries which comprises Belgium, Canada, the Federal Republic of Germany, France, Italy, Japan, the Netherlands, Sweden, the United Kingdom, and the United States. Only 22 per cent of the $1.8 billion of drawings outstanding on June 30 of this year were attributable to drawings by these members. Over the entire period of operations to that date (from March 1947), developing countries, with 26.66 per cent of the quotas, had drawn 36.79 per cent of the foreign exchange assistance provided by the Fund. (The drawing position of the Latin American countries is discussed in “Latin America and the Fund” in this issue.)

The largest drawings during the first half of this year were made by the United States (equivalent to $250 million) and Italy (equivalent to $225 million). Both countries were using the Fund’s resources for the first time, and neither drew beyond its gold subscription. Most of Italy’s drawing, in fact, had the effect of restoring the Fund’s holdings of lire, which had been reduced in the course of drawings by other members. The previous large drawings of U.S. dollars had been fully reversed; beyond this point repayment obligations must be met in other convertible currencies. In drawing European currencies, the United States indicated that it would sell these currencies for dollars to countries wishing to make repayments to the Fund.

Both the United States and Italy drew principally on the Fund’s holdings of German and French currency, which have been further reduced by the demands of other countries. In consequence, the Fund’s holdings of the two currencies were lower on June 30 than at any previous date. Undrawn deutsche mark were at 11.3 per cent of quota, and francs at 30.6 per cent. Net drawings of deutsche mark were $502 million, and of francs, $350 million. These amounts together represented almost half of the $1.8 billion of drawings outstanding.

There were six African countries among the members which obtained financial assistance from the Fund during the first half of 1964, a larger number than in any previous half-year period. Liberia, Somalia, and the United Arab Republic concluded stand-by arrangements, and Mali, Morocco, and the Sudan obtained approval for drawings. Stand-by arrangements also were announced for Chile, Colombia, Japan, Nicaragua, Peru, the Philippines, the Syrian Arab Republic, and Turkey. Drawings were made by Chile, Colombia, Honduras, Italy, Liberia, Morocco, Nicaragua, Somalia, the Sudan, the Syrian Arab Republic, Turkey, the United Arab Republic, and the United States.

The Fund’s resources have continued to increase in the period before the next quinquennial review of quotas, in 1965. The increase in quotas from January 1, 1963 to June 30 of this year was equivalent to $478 million, due in part to subscriptions of new members, and in part to requests by individual members to increase their financial participation. Higher quotas were agreed during this period for the Dominican Republic, Ecuador, El Salvador, Ethiopia, Honduras, Israel, Jordan, Libya, Luxembourg, Malaysia, Peru, Senegal, the Syrian Arab Republic, Tunisia, the United Arab Republic, and Viet-Nam. Several other increases have been approved by the Fund’s Board of Governors, but will not become effective until they are formally accepted by the members concerned.

On June 11, Mr. Schweitzer, the Fund’s Managing Director, and His Excellency Alfred Zehnder, Ambassador of Switzerland to the United States, exchanged letters which constitute an association of Switzerland with the Fund’s General Arrangements to Borrow, in which the ten industrial countries named above already participate. The Fund’s announcement said that Switzerland would make financial agreements, which may be reciprocal, directly with participants in the borrowing arrangement, and will make available resources in amounts up to 865 million Swiss francs. The Fund will thus be able to call upon Switzerland to extend credits, in accordance with its agreements with individual countries, if the general borrowing arrangements should be invoked.

During the 1963 Annual Meeting of its Board of Governors, the Fund and the ten industrial members participating in the borrowing arrangement agreed to undertake parallel studies of international liquidity. Observations of the Fund on this subject have been included in its 1964 Annual Report, which was published in August.

On June 15 and 16, a Ministerial Meeting of the ten countries was held in Paris, under the chairmanship of M. Valery Giscard d’Estaing, the French Minister of Finance. It was attended also by the Managing Director of the Fund, the Secretary General of the Organization for Economic Cooperation and Development, the General Manager of the Bank for International Settlements, and an observer from the Swiss National Bank.

A communiqué issued on that occasion said that the Ministers and other officials had examined studies of the outlook for the functioning of the international monetary system, and of the probable future needs for liquidity. “Useful discussion…” it was reported, “indicated a broad range of agreement.” The Ministers instructed their deputies to draft a joint statement for their consideration, and agreed that this should be published at the same time as the Annual Report of the Fund. 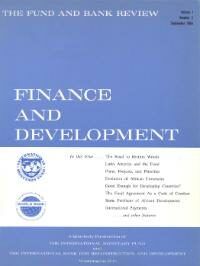