1. This note shows how the discussion of social spending issues has evolved in IMF surveillance and program staff reports since the late 1970s. Based on the intensity of use of social spending terms, social spending issues received increasing attention in the 1980s and 1990s, and have featured prominently in IMF staff reports ever since, with the exception of a 3-year dip during 2007–09 coinciding with the onset of the global financial crisis and the introduction of the 2007 Surveillance Decision. This overall trend is consistent across all types of documents and measures used. A similar trend was observed for in-depth analysis of poverty and distributional issues.

B. Description of the Database Used for Text Mining

2. A database comprising 8,998 IMF staff reports over the period 1979–2018 was compiled for this exercise.2 The main source is the IMF’s Institutional Repository, which includes all documents submitted to the IMF Executive Board. Document information (“metadata”) such as country name, type of reports, and years was first sourced from the Knowledge Exchange website and then completed and corrected through text analysis techniques. The resulting classification was cross-validated with information from the Monitoring of Fund Arrangements (MONA) database for the 1992–2018 period, and SEC Board Calendar Management System for the 2001–2018 period. The database includes 3,836 Article IV staff reports, 1,897 program review staff reports, 1,023 combined Article IV and program review staff reports, and 2,242 Selected Issues Papers (SIPs). In the subsequent analysis, surveillance documents refer only to Article IV staff reports, whereas program documents include both program review staff reports and combined Article IV and program review staff reports. SIPs, which typically cover specific topics, have been included in a separate group. The database covers all staff reports classified as “Public,” “Official Use,” and “Confidential.” A set of 118 “Strictly Confidential” documents was not included in the database.3 Programs are classified according to the official classification of the IMF lending facilities. Facilities financed from the General Resources Account (GRA) are the Extended Fund Facility (EFF), the Precautionary Credit Line (PCL), the Precautionary and Liquidity Line (PLL), the Flexible Credit Line (FCL), the Stand-By Arrangement (SBA), and the Rapid Financing Instrument (RFI).4 For the purposes of this study, staff reports classified as Extended Arrangements (EA) and Use of Fund Resource (UFR) are also labeled as GRA-supported programs. The Policy Coordination Instrument (PCI)—a non-financial arrangement—was also grouped with GRA facilities. Facilities financed through the Poverty Reduction and Growth Trust (PRGT) are the Extended Credit Facility (ECF), the Rapid Credit Facility (RCF), the Standby Credit Facility (SCF).5 For the purposes of this study, LIC facilities available prior to the PRGT—the Exogenous Shocks Facility (ESF), the Structural Adjustment Facility (SAF), Enhanced Structural Adjustment Facility (ESAF), and Poverty Reduction and Growth Facility (PRGF)—are also labeled as PRGT-supported programs. The Policy Support Instrument (PSI)—a non-financial arrangement for low-income member countries—was grouped with PRGT facilities. Also included in PRGT were programs financed under a combination of PRGT and GRA accounts. Ex-Post Assessment (EPA), Staff Monitored Program (SMP), and Post-Program Monitoring were included in either PRGT or GRA depending on the underlying program or the country’s eligibility for PRGT facilities.

4. The intensity of the discussion of social spending in documents is measured by the term frequency. The term frequency is defined as the number of occurrences in a document of specific terms, normalized by the number of words in that document to account for possible variations of document length over time (and scaled by a factor 10,000 for presentational purposes).6,7 To allow comparisons between countries with a different number of staff reports per year,8 the term frequency is averaged across all staff reports in a given year for each country. The list of social spending-related terms was pre-defined by IMF subject matter experts who examined a representative number of staff reports.

9. The specific social spending topics that have received most attention are related to pensions, health, and education (Figure 5). There are, however, variations among country groups, with pension-related issues figuring most prominently in advanced economies, and health and education issues more prevelant in low-income countries. Energy subsidies, social assistance, income support, and other subsidies are less discussed, except for Middle-Eastern countries where subsidy issues were raised more regularly.

A set of 187 program and surveillance documents with no specific country focus such as reviews of facilities was not included in the analysis.

The GRA arrangements comprise a variety of lending programs available to all Fund members with different disbursement schedules and maturities depending on the balance of payment needs of the member.

The term frequency approach was preferred to the topic modeling approach. Topic modeling is an unsupervised approach to identify keywords and common patterns representing topics throughout document collections using hierarchical probabilistic models. In topic modeling, there are no benchmarks to measure against and no direct method to adjust parameters. Moreover, the number of possible topics is limited, whereas staff reports cover a very broad range of topics over time.

Sensitivity analysis shows that the results in the trend of social issues discussed in IMF programs are broadly uncorrelated to the length of IMF documents. The length of the staff reports dropped from 2,015 words on average in 1982 to 974 words in 1984, and from 1,950 words on average in 2005 to 1,224 words in 2007. It is, therefore, important to account for these changes in the length of staff reports. The “normalized average frequency count per document” used as indicator in this analysis has a flatter shape and a less pronounced dip between 2007 and 2009 than the unnormalized indicator (“average frequency count per document”). However, overall, both indicators have broadly similar trends.

There is only one Article IV staff report at most per year whereas there would be several program review staff reports (two or more depending on the frequency of the review cycle). To ensure comparability, the frequency count is the average of the normalized term frequency for all the staff reports for a country in a year.

Equivalent to about 40 unnormalized occurrences per report.

In addition to the main text of the staff report, program staff reports include often the letter of intent, the memorandum of economic and financial policies, the technical memorandum of understanding and the data reporting requirements.

The discussion of social spending issues in SIPs follows a similar pattern to Article IV documents.

Overview of Fund Documents by Type

Normalized Frequency Count-Breakdown by Surveillance and Program and Outliers 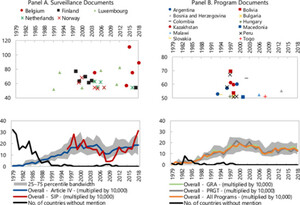 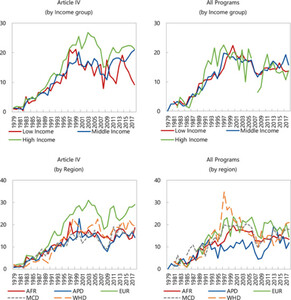 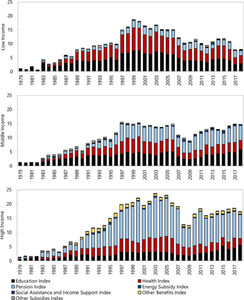 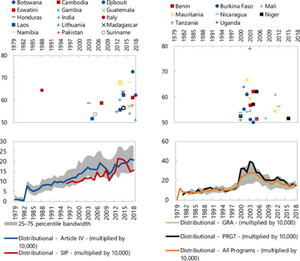