IMF Area Department mission chiefs were surveyed between July and December 2018 to better understand the country team’s approach to social spending issues, the nature and extent of their engagement, and the challenges they faced in this engagement. The survey responses indicated that: i) social spending is widely considered to be macro-critical; ii) when engaging on social spending IMF country teams rely on their own resources and also extensively leverage internal and external expertise; iii) program objectives are typically in line with countries’ social spending priorities; and iv) IMF policy advice to member countries commonly involves social spending reforms.

1. A survey of IMF mission chiefs (MCs) provides insights into staff views on the Fund’s engagement on social spending. The survey collected views of MCs leading country work for the 189 IMF member countries, as well as those responsible for IMF country work related to Aruba, Curação and St. Maarten, Hong Kong, Macao SAR, and West Bank and Gaza. The survey was conducted during July through December 2018. It sought to capture views on a wide-ranging set of issues related to the IMF’s work on social spending, including on analysis and policy advice and interaction with other stakeholders. It included specific questions on program context, design, and conditionality.

B. Macro-criticality of Social Spending Issues

5. The drivers of the macro-criticality of social spending vary significantly. The most cited reasons for considering social spending to be macro-critical are: (1) the risk posed to social and political stability by inadequate social spending; (2) the view that social spending is key for achieving the authorities’ distributional objectives; and (3) the need to close development gaps, including those needed to meet the SDGs (Figure 3). Yet, there is some heterogeneity across country groups. Whereas in AEs spending pressures, population ageing, and distributional objectives are the most commonly cited factors, in LIDCs development gaps in education, health, and social protection as well as social and/or political stability are considered the main drivers of macro-criticality (Figure 4, left panel). In countries under IMF supported programs, MCs most often point to the need to close development gaps and the risks to social and/or political stability stemming from inadequate social spending (Figure 4, right panel). These concerns are particularly prominent in fragile states.

C. Resources for Addressing Social Spending Issues and Interaction with Other Institutions

6. Country teams rely on their own resources and leverage IMF and external expertise. Overall 80 percent of MCs indicated that own resources and analysis are the main basis for engagement on social spending issues. Analysis, tools, and technical assistance provided by other IMF departments is cited by about 50 percent of MCs as an important source of expertise and analysis. The Fiscal Affairs Department (FAD) is the main provider of analysis and expertise with technical assistance and some of the tools that have been developed being used by many teams.4 International Development Institutions (IDIs) (in almost 80 percent of cases), country authorities (31 percent), and academics (20 percent) are recognized as important external contributors of knowledge and expertise. Reliance by IMF staff on external resources varies significantly across countries, partly reflecting the focus and role of IDIs and varying levels of countries’ capacity. While use of World Bank resources is low for AEs,5 the World Bank is a major partner for IMF engagement on social spending in EMEs and LIDCs.6 Conversely, external partners are an important source of information on AEs, alongside authorities’ and scholars’ analyses.7

7. Staff benefits from intensive interaction on social spending with the World Bank and other IDIs. Interaction with development partners most often takes the form of bilateral discussions between IMF country teams and sectoral experts, either at headquarters or during missions. Collaboration on analytical projects appears to be much less frequent.8 Table 1 maps external interactions by topic and counterparts. Cooperation spans all areas of social spending, with social assistance, education, and health being the most common topics. The World Bank accounts for almost half of total interactions and is the most frequent counterpart across all topics, reflecting its significant expertise both on design and implementation of social spending programs. Interaction between IMF country teams and OECD and ILO is rare (only 1.3 and 1.2 percent of interactions respectively), consistent with their limited operational presence in the field.

Interaction with Other Institutions: Mapping Topics and Counterparts

Interaction with Other Institutions: Mapping Topics and Counterparts

8. The factors primarily holding back engagement on social spending issues are competing priorities for country analysis, availability and quality of relevant data, and availability of expertise within the team (Figure 5). These three challenges were seen as key across surveillance and program countries, as well as across regions and income groups, and also for fragile states. In the case of fragile states data quality/availability issues were signaled as especially relevant.

10. Social spending reforms are a common feature of IMF policy advice to member countries, both in surveillance and program countries (67 and 69 percent of the cases respectively, Figure 6). Some income group and regional variation is observed. While in AEs and EMEs social spending reforms are recommended in three-quarters of the cases, similar recommendations are made in only 1 of 2 LIDCs and fragile states, mostly reflecting less frequent recommendations in Sub-Saharan countries.

11. IMF policy advice on social spending often centers on targeting based on means-testing, both in surveillance and programs. The introduction or expansion of means-tested schemes is recommended in the majority of cases (64 percent) and the downsizing of schemes that do not require a means test is suggested in 18 percent of the cases. The expansion of social programs not based on a means test is recommended in only about 18 percent of cases. These results indicate that means-tested programs play a central role in IMF policy advice on social spending issues, a pattern that is more pronounced in program contexts when the introduction or expansion of a means-tested program is recommended in 4 of 5 cases, likely reflecting more severe fiscal space constraints during a fiscal adjustment, but only in one half of fragile states.

12. In some cases, IMF policy advice on social spending issues is reported to have been controversial with the authorities or other stakeholders, with higher reported controversy in EDE, LAC and CIS. IMF recommendations on social spending appear to have been controversial with the authorities or given rise to criticism by other stakeholders in only 15 percent of cases. This pattern is consistent across Fund activities (surveillance and programs) and most income groups. For EDE, LAC, and CIS MCs, policy advice was more often reported to be controversial, specifically in 42, 31, and 30 percent of the cases, respectively.

13. In Fund-supported programs, MCs believe that objectives are generally aligned with countries’ social priorities and social spending is typically protected. In nearly all cases, MCs indicated that IMF programs entailed either fiscal consolidation or a neutral fiscal stance, with only a few cases of fiscal expansion. The majority of MCs (70 percent) view program objectives as consistent with country authorities’ social priorities, and an additional 19 percent were neutral with respect to this question. Even though fiscal consolidation is required to restore macroeconomic stability in many programs, MCs indicated that key social spending items are typically maintained (54 percent) or increased (37 percent). In most of the cases, the objective is to maintain or increase spending as a share of GDP or in nominal terms (Figure 7).

14. Conditionality in IMF programs is generally viewed as an effective mechanism to protect social spending. Almost all IMF programs include conditionality aimed at protecting and strengthening social spending. In terms of effectiveness, most MCs (63 percent) indicated that program conditionality is an effective way to protect spending and 22 percent were neutral on this statement. Indicative targets are the most widely used mechanism (indicated by 70 percent of MCs, Figure 8). Commitments of country authorities in Memoranda of Economic and Financial Policies (MEFPs) are also common (about 40 percent of the cases). Structural benchmarks (SB), which entail design or approval of reform measures by governments, are used to a lesser extent (24 percent of the cases).9 Conditionality has been used on the whole spectrum of spending categories (education, health, social assistance, unemployment benefits, pensions, etc.) with no clear pattern across region and income groups. MCs reported that conditions are met most of the time, even though 75 percent of them acknowledged that during the life of the program at least one conditionality (either quantitative or structural) was missed at some point. Shortfalls in external donor financing flows or government revenue or lack of ownership are the most cited reasons for targets being missed.

15. There is room to improve on the design and implementation of conditionality. Almost half of the MCs indicated that the design of social spending conditionality in IMF programs could be improved by narrowing the definition of spending floors (e.g., aiming at the most critical programs in a selected way), broadening consultation with IDIs, and improving data quality. In underscoring the need to strengthen implementation of social spending measures (noted by 40 percent of respondents), MCs pointed to the need to enhance implementation capacity in program countries and early engagement with IDIs to ensure that conditionality reflects country-specific factors.

The response rate was very high (83 percent) also for the sub-sample of fragile states.

For example, almost 30 percent of teams use FAD’s tool for assessing spending, almost 20 percent use the Department’s long-term pension and health projections, about 16 percent use the inequality database and a similar share of teams uses tools and templates for energy subsidy reform. MCs would most welcome further tools on education, health and social assistance. Technical expertise is also leveraged, with 15 percent of the surveyed teams reporting using FAD TA when engaging on social spending issues.

Only 6 percent of AE MCs selected World Bank as an important source of information.

The World Bank was indicated as an important source of analysis and resources by respectively 60 and 53 percent of MCs of EMEs and LIDCs, and just above 60 percent for fragile states.

For AEs, the shares of MCs that flagged other international institutions and the authorities as an important source of information are 53 and 47 percent respectively.

18 percent of MCs indicated collaboration on analytical projects as a modality chosen for interacting with other institutions.

On IMF conditionality and the differences between type of conditions, see the IMF website.

Is Social Spending Macro-critical for your Country?

Why Social Spending is Macro-critical

Has the IMF Team Recommended Reforms in the Area of Social Spending?

Programs Context and Objectives: Does the Program Seek to Protect Expand Social Spending?

Does the Program Include Conditionality on Social Spending? 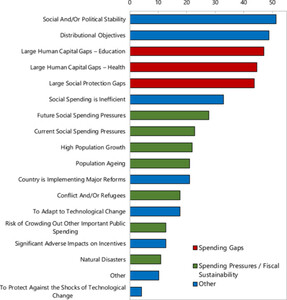 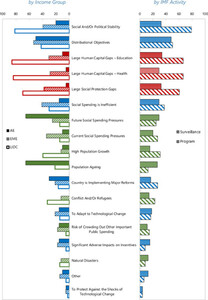