STRUCTURAL REFORMS AND MACROECONOMIC PERFORMANCE: INITIAL CONSIDERATIONS FOR THE FUND

IMF staff regularly produces papers proposing new IMF policies, exploring options for reform, or reviewing existing IMF policies and operations. The following document(s) have been released and are included in this package:

Electronic copies of IMF Policy Papers are available to the public from http://www.imf.org/external/pp/ppindex.aspx

STRUCTURAL REFORMS AND MACROECONOMIC PERFORMANCE: INITIAL CONSIDERATIONS FOR THE FUND

Structural policies have become a prominent feature of today’s macroeconomic policy discussion. For many countries, lackluster economic growth and high unemployment cloud the outlook. With fewer traditional policy options, policymakers are increasingly focused on the complementary role of structural policies in promoting more durable job-rich growth. In particular, the G20 has emphasized the essential role of structural reforms in ensuring strong, sustainable and balanced growth.

Against this backdrop, the 2014 Triennial Surveillance Review (TSR) called for further work to enhance the Fund’s ability to selectively provide more expert analysis and advice on structural issues, particularly where there is broad interest among member countries. The purpose of this paper is to engage the Board on staff’s post-TSR work toward strengthening the Fund’s capacity to analyze and, where relevant, offer policy advice on macro-relevant structural issues.

While there is already an extensive range of work underway across the Fund, this paper lays out considerations to help frame a more strategic approach on structural issues that would better support the range of macro-structural needs of member countries. In that regard, this paper does not signal a dramatic shift in the Fund’s agenda or coverage of structural issues; nor does it aim to provide a “how to” guide for advising countries on specific structural reforms. Instead, it focuses on “what” structural reforms are most likely to have macroeconomic implications, without attempting to do justice to the entire spectrum of issues that come under the structural reform umbrella.

To this end, the paper deploys a number approaches to identify reform areas most relevant across the membership.

Looking ahead, the approach and priorities identified in this paper can help guide the Fund in supporting countries’ macrostructural policy needs. At an institutional level, the Fund’s operational efforts should be geared toward countries’ shared priorities. The Fund should continue to focus on structural reforms within its traditional areas of expertise—namely, fiscal structural and financial sector reforms. There are however other common priorities, outside of the Fund’s traditional areas of expertise yet within its mandate, and where there is likely to be broad-based demand across the membership. In such areas, the Fund may need to scale up its efforts to build in-house expertise. In areas where there is less likely to be widespread demand across the membership, the Fund should actively collaborate with and leverage other institutions’ expertise.

The goal is to develop a richer analytical foundation and range of tools—from within and outside the Fund—that country teams can leverage in their analysis and advice. Four complementary tracks of future work can help move this agenda forward: more systematically assessing country needs; ongoing analytical work; developing an analytical toolkit for staff; and developing modalities for inter-agency collaboration. This is not to say that Fund’s macrostructural analysis and advice in individual cases should be limited to those areas. Ultimately, Article IV consultations should always be country-specific.

Prepared by Strategy, Policy, and Review Department, in consultation with area and functional departments.

The team is also grateful for additional assistance and inputs from SPR colleagues (Greg Basile, Alexander Culiuc, Ilse Peirtsegaele, Jiemin Ren, Chad Steinberg, and Joanna Zaffaroni), as well as area and functional departments in compiling information on recent Fund-wide analytical work on structural issues, and respondents to the survey of Fund mission chiefs. 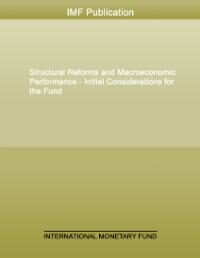