The Ebola epidemic in parts of West Africa is a humanitarian catastrophe that has drawn attention of the international community to the need of addressing the rapid spread of life threatening infectious diseases that cause substantial domestic disruption and cross international borders.

On February 4, 2015, the Executive Board of the International Monetary Fund (IMF) discussed how to better support Low-Income Countries hit by public health disasters. The Board approved the establishment of the Catastrophe Containment and Relief (CCR) Trust, allowing the Fund to provide debt relief in these cases, as well as to members experiencing other types of catastrophic disasters. These grants can ease pressures on the members’ balance of payments and create fiscal space to tackle relief and recovery challenges.

The CCR will provide grants for debt relief totaling $100 million for the three countries affected by Ebola in West Africa—Liberia, Sierra Leone, and Guinea. This comes in addition to the $130 million of assistance provided in September 2014, and a second round of new concessional loans amounting to about $160 million to be considered soon by the Executive Board.

In their November 2014 meeting in Brisbane, the G-20 called on the Bretton Woods Institutions to continue their strong support to countries severely affected by the Ebola outbreak through a combination of concessional loans, debt relief and grants, and asked the institutions to explore new, flexible mechanisms to address the economic effects of future comparable crises. The CCR Trust is the Fund’s response to that call. It replaces the Post-Catastrophe Debt Relief (PCDR) Trust established on June 25, 2010 in the wake of a massive earthquake in Haiti, and expands the circumstances under which the Fund can provide exceptional assistance to its low income members to include public health disasters.

Through the new instrument, the Fund is able to quickly and flexibly adjust its policies in the face of unexpected international developments, including pandemics, to serve the needs of its membership, especially the most vulnerable.

At the conclusion of the Executive Board meeting on the CCR, IMF Managing Director Christine stated: “I welcome the establishment of the Catastrophe Containment Relief Trust. It aims at enhancing our support to the countries in Africa hit by Ebola, as well as other low income countries that may be affected by public health disasters in the future.”

Directors welcomed the opportunity to discuss how the Fund can enhance its support to member countries affected by public health disasters. They agreed that the Fund has an important role to play as part of a broad international effort to assist affected countries, and underscored the importance of close coordination and effective collaboration with other international institutions, including the World Bank. Directors broadly supported the staff’s proposals, although a number of them felt that it would have been helpful to include a discussion of other options, such as increased access under the PRGT facilities.

Directors considered and supported the transformation of the existing Post-Catastrophe Debt Relief (PCDR) Trust into a Catastrophe Containment and Relief (CCR) Trust and the underlying policy framework as set out in the staff paper. They agreed with the proposed two windows under the CCR Trust: (i) a Post-Catastrophe Relief window, which would replicate the design and functions of the PCDR Trust; and (ii) a Catastrophe Containment window to support countries hit by public health disasters.

Directors broadly supported the proposal that eligibility for assistance from the CCR Trust should be limited to the poorest and most vulnerable PRGT-eligible countries, consistent with the existing eligibility criteria for support from the PCDR Trust. Some Directors called for the inclusion of other PRGT-eligible members, including but not limited to microstates. In this context, a few Directors noted that references to low-income countries in the staff paper needed qualification, given that not all low-income countries hit by public health disasters would be eligible to access the CCR. Directors agreed that access to grant resources from the Catastrophe Containment window should be limited to cases where the country is experiencing an epidemic of a life-threatening disease that has spread across several areas of the country, is causing significant economic disruption and balance of payments pressures, and has the capacity to spread, or is already spreading, rapidly within and across countries. Directors called on Fund staff to draw on assessments of the situation by relevant international agencies, especially the World Health Organization, and national authorities when conducting its analysis.

Directors supported the proposal to provide assistance via the Catastrophe Containment window of the CCR Trust in the form of up-front grants to immediately pay off upcoming debt service payments to the Fund on eligible debt. Eligible debt would not include credit committed concurrently with, or after, qualification. Directors also agreed that the amount of grant support would be set at 20 percent of the member’s quota, subject to the constraint that such support could not exceed the level of eligible Fund debt outstanding and conditional upon the availability of resources in the CCR Trust.

Directors broadly supported the proposal to allow for the possibility of providing assistance in excess of 20 percent of quota under the exceptional circumstances specified in the staff paper. A number of Directors, however, expressed reservations regarding using these exceptions, while some Directors stressed the need for flexibility in responding to public health disasters. In all exceptional cases, management intends to consult informally with the Executive Board when there is a potential case for providing grants in excess of 20 percent of quota under these exceptions, before bringing the proposal for formal Board consideration.

Directors supported the proposal to liquidate the MDRI-I Trust and to transfer all remaining balances to the General Account of the CCR Trust (through the SDA). They also agreed to amend the liquidation provision of the MDRI-II Trust Instrument to allow for the transfer of remaining balances upon its liquidation to the General Account of the CCR Trust, which would become effective upon each contributor’s consent. Some Directors expressed concern that the transfer of MDRI balances to the CCR Trust could divert potential resources away from the PRGT. Directors underscored the importance of securing additional bilateral resources to ensure adequate financing of the CCR Trust for potential future cases.

Directors looked forward to a comprehensive review of the CCR Trust five years after its establishment, or earlier if warranted.

An explanation of any qualifiers used in summings up can be found here: http://www.imf.org/external/np/sec/misc/qualifiers.htm. 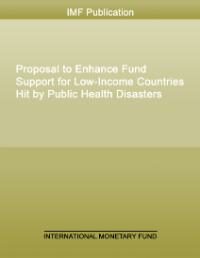