Review of the IMF's Communications Strategy

Review of the IMF's Communications Strategy

On July 29, 2014, the Executive Board of the International Monetary Fund (IMF) discussed a paper prepared by the Communications Department on “Review of the IMF’s Communication Strategy.”

The Board last discussed the Fund’s communication strategy in June 2007 (see Public Information Notice (PIN) No. 07/74). The discussions of the communications strategy are in addition to the separate Board reviews and updates of the IMF's transparency policy, which set the guidelines for the types and extent of information that the Fund may release publicly (see Press Release No. 13/270 for the latest review of the IMF’s Transparency Policy).

Executive Directors welcomed the opportunity to review the Fund’s communications strategy. They agreed that timely two-way communication with the IMF’s global membership and other stakeholders has played an important role in strengthening the traction of the Fund’s policy advice. As such, communication is a strategic tool and integral to the IMF’s improved transparency and broader effectiveness and accountability. Directors stressed nevertheless that good communication cannot substitute for the underlying policies.

Directors concurred that the framework guiding the communications strategy, as endorsed by the Executive Board in 2007, remains broadly appropriate. They observed that the overall strategy has allowed the Fund to communicate effectively and flexibly. They commended staff responsible for this work, particularly the Communications Department, for the substantial progress in implementing the strategy in a rapidly changing environment.

Directors encouraged continued efforts to strengthen and adapt Fund communication, with a view to deepening public understanding of the Fund’s work and policy advice. They noted that evolving issues facing the membership, as well as new technologies, require continued flexibility and proactive engagement, including with new media. To this end, they underlined the need to communicate in language that is easily understandable and to continue improving internal communication and collaboration. Directors considered it important to maintain the Fund as an open, flexible, and responsive institution in its external communication, while at the same time preserving its role as a trusted advisor to its members.

Directors agreed that clarity and consistency are vital for effective communication, given the variety of Fund products and the different levels of public pronouncements. In this context, they welcomed the proposed steps to differentiate more clearly publications that represent official policy and decisions, or that have been formally discussed by the Executive Board, from other staff papers. Directors generally supported the proposed steps for end-of-mission staff statements to stress their preliminary nature, clarify the attribution of views, and ensure the brevity and simplicity of the mission’s messages, although some Directors would have preferred a simpler disclaimer by referring to the IMF’s views rather than those of the Executive Board or management. A few Directors also saw room for further improving the consistency and effectiveness of Fund messages through consolidation of some flagship products.

Directors discussed the roles of the Executive Board and management in public pronouncements, and appreciated further clarification regarding the issue of who is, and who can speak for, the Fund. They underlined the importance of ensuring that, in making public statements, the respective authority of each organ of the Fund is respected, and that the audience understands who is speaking for the Fund and in what capacity. Noting that the Executive Board has a role to play in setting strategic priorities and shaping high-level messages of the Fund, Directors welcomed ongoing efforts to apprise the Board more systematically of key public communications by management ahead of time, while not placing undue constraints on management, especially in crisis situations when the speed of communication is of the essence.

Directors supported plans to conduct impact assessments through more regular opinion research and surveys. While recognizing the inherent complexities in measuring such impact, they saw the usefulness of these assessments in gauging the effectiveness of communication—including on a regional basis—to draw lessons and sharpen the focus of the Fund’s communications strategy. In this context, a number of Directors, noting from recent surveys the perceived lack of evenhandedness in the Fund’s treatment of its members, suggested that further efforts be taken to understand the causes of the issue and address it. Directors also regarded the quality and timeliness of publications in languages other than English as essential for effective communication.

Directors noted that the increasing use of new technologies at the Fund—including social media—has helped strengthen communication around important events and products. They stressed that any expansion of social media activity should continue in a careful and strategic way, with adequate oversight, appropriate training, and proper resourcing. Directors emphasized that maintaining the Fund’s reputation and credibility remains an important consideration in this regard.

Directors commended staff for implementing the communications strategy within the tight resource envelope, and encouraged them to continue doing so in a cost-effective manner. They urged staff to continue to seek efficiency gains in communications and reallocate resources toward higher-priority, higher-impact areas.

Directors generally agreed that the communications strategy should be reviewed more frequently, with formal reviews scheduled to coincide with the reviews of the Fund’s transparency policy, and with informal updates to the Board on an annual basis, including on the implementation of the new disclaimers and the results of impact analysis. In the meantime, efforts will need to continue to fine-tune the Fund’s approach to communication, reflecting on Directors’ comments and suggestions today. 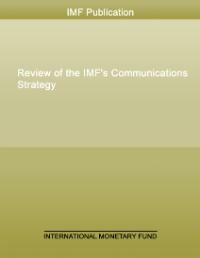