Jump to Content Jump to Main Navigation
Statement by the Managing Director on the Work Program of the Executive Board - Executive Board Meeting
Author: International Monetary Fund

1. Managing multiple transitions. The Global Policy Agenda (GPA) presented to the IMFC in October identified a range of actions needed to break the cycle of subdued growth and recurrent market jitters that has characterized the global recovery so far. These actions included strengthening policy implementation and carefully managing a series of transitions already under way, including the normalization of global financial conditions, with its associated policy spillovers; a shift in growth dynamics, with a rising contribution from advanced countries and lower underlying growth in emerging market economies (EMEs), and a rebalancing of global demand; and the completion of global financial system reform to promote greater stability. The GPA also outlined the policy priorities for the membership and the focus of the Fund’s activities going forward (Figure 1).

2. Work program. This document translates the policy priorities laid out in the GPA and the IMFC communiqué into a work agenda for the Executive Board over the next six to twelve months.

Tuning the Engines of Growth

3. More policy ambition. The global recovery has been uneven and more subdued than hoped. Moving from stabilization to strong, sustainable, balanced, and inclusive growth remains a work in progress and requires more ambitious policy implementation. The Fund will assist its members in delivering on this task, including through assessments and policy advice provided in the context of bilateral and multilateral surveillance, as well as capacity building and financial support.

4. Addressing fiscal fragility. High deficits and debt, in some cases as a legacy of the global financial crisis, remain a matter of concern in many countries. The Fund will continue to assist members in strengthening their fiscal policy frameworks to reduce vulnerabilities and address sustainability risks.

Policies for an Interconnected World

5. Policy coherence, spillovers and imbalances. In today’s increasingly interconnected world, the Fund offers a unique forum for multilateral policy dialogue and information sharing. As such, the Fund can help members prepare for the challenges of the ongoing global transitions, and facilitate concerted action and international cooperation on matters such as policy spillovers and global imbalances.

8. International taxation. Differences in national tax policies create opportunities for avoidance and evasion that can lead to economic dislocations and a level of taxation that is lower than countries would otherwise prefer. In May 2014, the Board will discuss Spillovers and International Taxation, which describes current international income tax rules and practices, assesses their macroeconomic importance, and explores possible policy responses.

9. Lending and the global financial safety net. Well-designed programs and adequate financial backstops remain critical for effective crisis prevention and response. Staff will continue to work on strengthening the Fund’s lending framework, including from a perspective of reducing stigma and dealing with large swings in capital flows and potential crises, and reflect on broader architectural issues.

10. Governance. Quota and governance reform is essential to the Fund’s legitimacy and effectiveness. Ratification of the 2010 reforms remains the highest priority and management will continue to keep the Board informed about progress in securing the necessary consents. With regard to the 15th Quota Review, the membership has reiterated its commitment to complete the review by end-January 2014. The scheduling of Board meetings on the 15th Review will be kept under close review taking account of progress on the ratification of the 2010 reforms.

11. Long-term strategy. Staff will consolidate the work on long-term trends and strategy—including feedback from internal and external stakeholders—and consider ways to integrate long-term thinking into the Fund's policies and operations. The Executive Board will be briefed as work progresses in a format to be determined.

14. Internal operations. The demands on staff remain high and are not likely to abate in the near future given the still challenging global economic environment. This places strong demands on Fund staff, which need to be carefully managed. A number of Board meetings that are being carried over from the Spring WP have been delayed, postponed, or dropped in light of competing work pressures.

15. IEO reviews. The two IEO reviews —IMF Forecasts: Process, Quality, and Country Perspectives and Learning from Experience at the IMF: An IEO Assessment of Self-Evaluation Systems — are carried over from the Spring WP. Discussions on these reviews are planned for February and March, 2014, respectively. 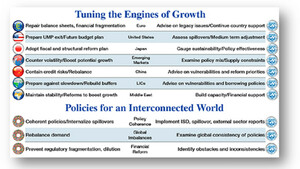 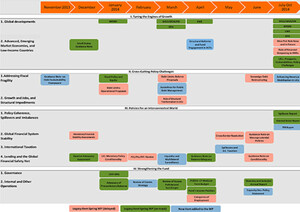