The global economy has avoided the worst, but it is by no means out of the woods, and prospects may be diverging. A three-speed global recovery is emerging. Sentiment has improved, but growth and jobs are still lagging in many places, some old risks remain and could rekindle tail risks, and new risks are arising. Policymakers must, to varying degrees, continue to nurse the recovery, repair systems damaged by the crisis, strengthen defenses against a recurrence, and anticipate new challenges from stronger expansion. In a world of interconnections, lagging policy momentum in some corners will soon affect all.

The global economy has avoided the worst, but it is by no means out of the woods, and prospects may be diverging. A three-speed global recovery is emerging. Sentiment has improved, but growth and jobs are still lagging in many places, some old risks remain and could rekindle tail risks, and new risks are arising. Policymakers must, to varying degrees, continue to nurse the recovery, repair systems damaged by the crisis, strengthen defenses against a recurrence, and anticipate new challenges from stronger expansion. In a world of interconnections, lagging policy momentum in some corners will soon affect all.

I. The Global Context

1. Last GPA. At the time of the last IMFC meeting, the global recovery had suffered renewed setbacks, with output contracting in the euro area and growth decelerating in many other countries, including major emerging markets. At my last IMFC presentation, together, we outlined the policy priorities for the membership and the Fund that were needed to secure the recovery and anchor the future (text chart below).

2. Economic developments. The global economy is in a better place than last fall and increasingly moving at three speeds. Activity has already strengthened in many emerging market and developing countries, which continue to post relatively high growth rates. In the United States, although fiscal withdrawal will weigh on recovery, private demand appears to be gradually reviving. By contrast, the handover from public to private demand and thus economic recovery remains elusive in the euro area and risks of a relapse into crisis persist. Meanwhile, Japan continues to face deflation but will see a stimulus-driven rebound of activity.

3. Policy record. The membership has acted on many of its commitments. Policy implementation has generally been encouraging in emerging market economies and low-income countries, and more mixed in advanced economies and in countries in transition in the Middle East and North Africa (MENA) region.

4. Risks. The global economy still faces headwinds, with lingering risks of a prolonged slump. Deep policy concerns and economic brakes are still at work, including from limited progress in post-crisis reforms, and new risks are appearing in the context of the emerging three-speed recovery. Addressing these underlying weaknesses is critical to improve global business sentiment needed to make the recovery stronger and more durable.

5. More action is needed to disperse the clouds still weighing on the global economy and to encourage stronger and sustainable growth. This will require policymakers to commit to bold medium-term objectives with realistic implementation paths. To be effective, policies should balance the need to support growth with the need to overcome weak fundamentals—fiscal, financial, business, or household. This can help anchor private sector expectations and generate the needed recovery in confidence, jobs, and investment. These tradeoffs and the policy mix will need to be carefully calibrated to country circumstances and shifting risks.

10. Restoring the world economy’s resilience requires decisively addressing medium-term structural issues. Progress so far has been uneven and lagging in some areas, and the associated uncertainty is undermining the recovery. Policy measures discussed at the last IMFC meeting remain relevant. There are, however, a few areas where urgent collective action is warranted.

11. Despite some progress on regulatory reform, it is critical that policymakers commit to completing these reforms to limit uncertainty, arbitrage, and financial fragmentation. The good news is that enhanced capital rules and G-SIFI surcharges are largely agreed. The major remaining priorities include: addressing the “too big to fail” problem (where competing plans risk regulatory arbitrage); reforming over-the-counter derivatives trading; and agreeing on consistent accounting standards and shadow banking regulations. Once these reforms are completed, consistent implementation will be essential for the regulations to be effective.

12. Lingering concerns over the future trajectory of public and private debt highlight the importance of durable fiscal adjustment and institutional reform. Many advanced economies have steadily lowered their fiscal deficits and some are close to achieving primary surpluses that stabilize debt ratios. However, this is only a first step. Even if stable, large deficits and high public and private debt reduce potential growth and leave economies vulnerable to shocks. Many emerging markets and low-income countries are also running primary deficits and have work to do to restore policy buffers to their pre-crisis levels.

13. Job creation and inclusive growth are imperatives that resonate in the entire membership. For some countries, the priority is to address the huge increase in unemployment since the onset of the crisis. Others will need to deal with demographic trends (aging populations or large increases in working age populations) in the face of globalization and technological change. The agendas of growth, job creation and inclusion are interlinked, but countries should tailor policies to address differing challenges and differing growth constraints.

14. Global external imbalances have continued to narrow, but policy action needs to contribute more to the adjustment. Most of the adjustment took place during the Great Recession of 2008–09, reflecting negative global growth and the correction of past financial excesses. The adjustment in real exchange rates since 2007 also facilitated some narrowing of global imbalances. Additional fiscal and structural policy actions are needed to ensure that the imbalances continue to narrow.

15. Worries over currency valuations and competitive depreciation are on the rise. Exceptionally accommodative monetary policy in key advanced economies can have side effects through exchange rates and capital flows, including high asset prices in recipient countries and associated misallocation of resources that should be monitored. Over time, unconventional monetary policies are likely to have their largest impact through their effects on underlying market conditions. To the extent that unconventional monetary policies help lower tail risks, they can reduce underlying volatility. If, however, they delay more fundamental reforms, they are likely to prolong financial uncertainty and ultimately put pressure on other economies.

IV. Adapting To The Future

16. It is imperative that the 2010 reform package be adopted by the membership without delay. The package marks an important milestone in the quota and governance reform that started in 2006. We have fulfilled two of the three conditions needed for the 2010 reform to take effect. The remaining condition is to secure the 85 percent of the total voting power needed for the Board Reform Amendment to enter into force. As regards composition of the Executive Board, the election of a new Board was completed in October 2012, resulting in further progress in consolidating advanced European constituencies.

17.. Continued reform of our quota and governance structure is key to the Fund’s legitimacy and effectiveness. The Fund needs adequate resources to fulfill its role as the guardian of global stability. The 15th General Review of Quotas will offer an opportunity to review the adequacy and composition of Fund’s resources over the medium term, as well as the distribution of quota shares. The quota formula review was completed at end-January 2013 and the membership agreed that work on a new quota formula should be integrated with work of the 15th General Review of Quotas. In the coming months, the membership will need to coalesce around a reform package that can garner the broadest possible support. The Fund should also make further progress promoting the diversity of staff, a key component of the Fund’s legitimacy.

18. The second external evaluation of the Independent Evaluation Office (IEO) was discussed at the Board in March 2013. There was wide acknowledgement that the IEO has played an important role in supporting the Fund’s governance and transparency, and enhancing its learning culture. Many of the external evaluators’ recommendations to further enhance the effectiveness of the IEO—including on evaluation topics and the process of following up on recommendations—were strongly endorsed. Specific follow up actions on implementing these recommendations are being prepared for discussion by the Evaluation Committee and the Board.

19. Long term trends will continue to shape the landscape of the global economy. Securing the recovery and dealing with legacy issues have rightly occupied us in recent years. However, we must not lose sight of the broader canvass. The growing clout of emerging market economies is setting the stage for an increasingly multi-polar world. Debt overhangs in advanced economies and continued rapid growth of financial sectors in emerging market economies and developing countries are likely to raise the risk and cost of future crises. Growing output and populations in some countries will also put pressure on the environment and, while all countries will bear the cost, low-income countries are the most vulnerable to climate change. We will need to explore the consequence of these trends for the Fund and incorporate them in our strategic planning. 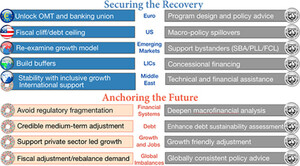 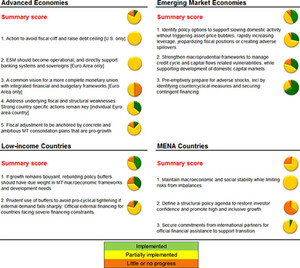 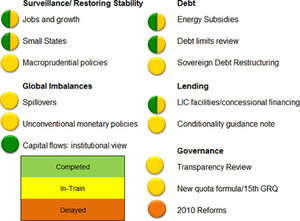