While this paper focuses on the public dissemination of fiscal information, many of its conclusions apply to the availability of information for policymakers even if not made public. Publication of this information brings the added benefits of improving its quality, compelling governments to confront its implications, and widening the debate on how to respond. See Box 1 for definitions of fiscal accounting, reporting, transparency, and risk.

Hameed (2005), and Dabla-Norris and others (2010) find that more transparent developing countries have better credit ratings and better fiscal discipline. This is supported by Alt and Lassen (2006) who find that a greater fiscal transparency is associated with lower public debt and deficits in 19 advanced economies. Arbatli and Escolano (2012) take this further by decomposing the relationship between transparency and credit ratings into the direct impact (reducing current uncertainty over the fiscal position) and the indirect impact (improving primary balance and gross debt over time), finding that the former dominates in developing countries, while the latter dominates in advanced economies. To clarify the direction of causality between fiscal transparency and outcomes, Glennerster and Shin (2008) use the publication of IMF fiscal data and reports to identify a significant causal relationship between publication and quality assurance of fiscal information and lower government bond yields.

Weber (2012) identifies poor fiscal transparency as a key predictor of statistical discrepancies in published fiscal data as measured by stock-flow adjustments between general government net lending/borrowing and the change in net debt. Irwin (2012) notes a positive relationship between the use of accounting devices and perceptions of sovereign credit risks as measured by credit default swap spreads. Gelos and Wei (2005) find that fiscally more transparent countries tend to attract more foreign equity investment and are less vulnerable to withdrawals during times of stress.

The first IPSAS—on Presentation of Financial Statements—was issued in May 2000. Since then 31 more IPSASs have been issued covering a range of topics, including cash flows, financial instruments, presentation of budget information in financial statements, service concession arrangements (including public-private partnerships), intangible assets, and contingent liabilities.

Of the 285 PEFA assessments, 133 are now public, 84 are final (endorsed by the lead agency but not yet made public) and 68 are in draft. Another 45 assessments are ongoing or planned. While around 40 percent of the information gathered through the fiscal transparency ROSC can also be derived from a PEFA evaluation, the PEFA does not provide a comprehensive assessment of fiscal transparency.

The IBP’s 92 question Open Budget Survey (http://internationalbudget.org/what-we-do/open-budget-survey/full-report/) assesses the availability of eight key budget documents, the comprehensiveness of the data contained in these documents, and the effectiveness of fiscal oversight provided by legislatures, supreme audit institutions, and the public. Answers to these questions are then compiled to generate an Open Budget Index value which is used to rank each country’s relative level of transparency.

According to IMF (2010b), 124 countries were able to transform their national presentation into GFSM 2001 format. However, only 55 compiled and reported GFSM 2001 data directly.

Legal provisions obliging governments to ensure that all budget documents are based on the most up-to-date information about macroeconomic conditions and the cost of government policies.

Indeed, it is unlikely that any of the standard fiscal risk assessments conducted before 2007 which focused on modeling shocks of one or two standard deviations would have caught the magnitude of the exposure to risks. Nevertheless, more analysis of macroeconomic and financial sector risks would have at least highlighted some of the exposure to shocks and the channels through which they would play out and, in any case, would be useful in case of more ordinary shocks.

International statistical and accounting standards define government control in broadly similar terms, as the authority and capacity to direct the policies or activities of another entity when the results of such direction can generate financial or other benefits for the government or expose it to a financial burden or loss. Under 2008 SNA, indicators of control include ownership of majority voting interest or “golden share,” the power to appoint the majority of the board of directors, or the power to dissolve an entity.

Fiscal statistics in Brazil, Honduras, and Uruguay consolidate not only all nonfinancial public corporations but also the central bank.

The US$291 billion increase in the deficit is the Congressional Budget Office’s (CBO) estimate of the net present value of anticipated cash flows. (CBO, 2009).

See IMF (2010c). Figures in parentheses are as a percent of Dubai and northern emirates GDP.

IMF (2011e) provides detailed guidance on the measurement of debt.

GFSM 2001 does require outstanding contingent liabilities to be disclosed as memorandum items to the balance sheet.

Even when the expected value is not recognized in accounts, IPSAS does require relevant information about the size, nature, and beneficiary of the guarantee to be disclosed in the notes to the accounts.

This will build on the more general guidance offered in Khan and Mayes (2009).

Eurostat is currently carrying out an assessment of the suitability of implementing IPSAS in EU member states (http://epp.eurostat.ec.europa.eu/portal/page/portal/public_consultations/consultations/ipsas).

Statistical standards require reporting of both transactions and positions.

Among the 27 EU member states, only Denmark and the UK prepare budgets on an accrual basis. Austria will adopt accrual budgeting from 2013.

Under the SGP, the deficit is measured on an accrual basis, except that the cost of acquiring a nonfinancial asset is recorded as expenditure in the year of acquisition rather than being spread over the life of the asset.

This does not necessarily imply that all such changes should be recognized in determining the deficit in budgets or ex post reports or that governments should change fiscal policy settings in response to short-term fluctuations in the value of their assets and liabilities. For example, GFSM 2001 distinguishes between changes in net worth due to transactions and holding gains and losses.

The INTOSAI operates as an umbrella organization for the government external audit community to promote development and transfer of knowledge, improve government auditing practices worldwide and enhance professional capacities, standing and influence of member supreme audit institutions (SAIs). The GIFT is a multi-stakeholder network working to advance and institutionalize global norms and bring continuous improvements in fiscal transparency, participation, and accountability in various countries.

See Petrie (2003) for a discussion of these aspects.

The revised Code took into consideration suggestions from the general public, country authorities, development agencies, academics, and nongovernmental agencies working in the area of budget transparency.

Where a differentiated standard already exists (as in the case of GDDS, SDDS, and SDDS Plus for statistical reporting), the Code and Manual will look to align themselves with these milestones.

IMF (2011b). The 2011 Standards and Codes Review Board Paper recommended extending the methodology of targeted ROSCs (currently applied to financial sector ROSCs) to a larger group of ROSCs.

Modules of the revised ROSC could also be used as the basis of a fiduciary risk assessment for countries seeking to access Fund resources, incorporating the lessons of the current fiscal safeguards pilots. See IMF (2012b). 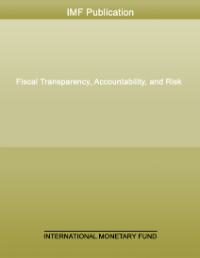 Powered by PubFactory
Close
Table A4