This paper provides the basis for the next round of discussions on the 14th General Review of Quotas.

This paper provides the basis for the next round of discussions on the 14th General Review of Quotas.

I welcome the shared commitment to reaching an agreement under the 14th General Review within the agreed timetable, but today’s discussion also shows that views remain divided on many key issues. I will ask staff to reflect carefully on these views as we consider how best to move the process forward within the short time period remaining. Let me highlight a few key points from our discussion:

Size of the Quota Increase: Most Directors supported a substantial overall increase to ensure that the Fund has sufficient resources to meet members’ needs. Many Directors noted that, since their last discussion of this issue in April, the case for such an increase had been further strengthened by developments in the euro area, underscoring the need for the Fund to be in a position to support all its members, including advanced countries, as well as by the recent progress on reforming the Fund’s lending facilities. Against this background, most Directors indicated that they could support a doubling of quotas, with a number viewing this as an upper bound and a number of others seeing it as a minimum. A few other Directors, pointing to the expanded New Arrangements to Borrow (NAB), were not convinced about the need to increase quota resources substantially beyond that needed to achieve the targeted realignment of quota shares. Many Directors noted that with an increase in quotas, the size of the NAB should be reconsidered to maintain the appropriate balance between quota and borrowed resources.

Quota Realignment: Directors reiterated their commitment to a shift in quota share to dynamic emerging market and developing countries (EMDCs) of at least 5 percent from over- to under-represented countries. However, significant differences remain on the details.

While many important differences remain to be resolved in the context of the general review of quotas, many of you have also pointed to inter-linkages between the work on quotas and other aspects of the governance reform. We should continue the process of informal consultations in the coming days with the goal of narrowing the remaining differences and providing the basis for a staff proposal that could command the necessary broad support.

Finally, let me call again on those members that have not yet done so to rapidly finalize their necessary domestic processes so that the 2008 quota and voice reform can become effective by the time of the Annual Meetings. 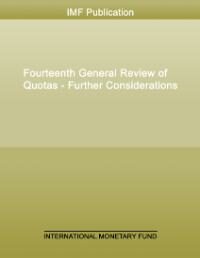