The startling plunge in global trade in recent months appears to partly reflect the global disruption of financial intermediation. The fall in trade appears faster than would be expected given data on activity, confirming widespread anecdotal evidence that the cost of trade finance has risen rapidly while many cases its availability has fallen. Unfortunately, there is little hard data on this area of financing, making it difficult to analyze underlying market conditions.

To fill this gap, the Fund (in conjunction with the Bankers Associations for Finance and Trade (BAFT)) initiated a survey of trade finance across major advanced and emerging market banks. More specifically, questionnaires were sent to advanced country and emerging market banks enquiring about current trade financing conditions compared to a year ago and expectations for the next year. As discussed in the Appendix, trade can be financed in a number of different ways. Cash-in-advance requirements or open account financing between importers and exporters, which involve direct loans to pay for imported goods, cannot be readily distinguished by banks from loans to pay for other expenses such as domestically produced intermediate products. The survey therefore centers on the bank-intermediated forms of international trade finance, such as letters of credit or trade lending.

The questionnaire was sent to a wide list of banks, of which some forty responded, evenly split between advanced countries and emerging markets.1 Banks were asked about the situation with identifiable trade credit in October-November 2008 compared to the same period in 2007, as well as their expectations looking forward over the next year.2 The survey focused on trends in the cost and provision of identified trade finance by banks, and the underlying reasons for these trends.

The cost of trade credit reflects the cost of finance, perceived increases in risk of such loans, and conditions in banks that provide such credit. Costs of finance vary over time depending on wholesale markets. Risks on trade loans come from events during shipping times. With global growth dropping rapidly, financial distress leading to banks closures and exchange rates fluctuating, counterparty risks have risen for importers, exporters, and financial intermediaries. To cover the potential costs of rising defaults, banks pricing margins have to increase. At the same time, the cost of trade finance also reflects conditions in banks. In particular, when banks are under pressure, the capital needed for trade finance may be allocated elsewhere on balance sheets. As a result, they may be less willing to offer trade finance to small or medium companies, or to companies with whom they do not have longstanding relationships, further raising the cost of finance.

The impact of rising uncertainty on the amount of trade finance provided by banks is ambiguous. As cash flow problems at importers and exporters become more severe, and they are less able to access cheap short-term finance to cover immediate needs, they may be less willing to extend trade credit to their partners, increasing the demand for bank-intermediated trade finance. On the other hand, rising costs of bank financing and reduced appetite for such lending by may lower the amounts extended by banks.

The net effect may depend upon types of trade and countries. For commodities, both effects are likely at work, with fluctuating prices and long shipping times raising the attractiveness of bank financing but banks themselves less willing to take the higher risk. For manufactured goods with low profit margins, the dampening effect from higher pricing is likely to dominate, as importers may not be able to afford more expensive letters of credit. For manufactured goods with higher margins, extra costs and higher risks are easier to absorb, but drops in demand may be disproportionately large for non-essential purchases. Countries that are perceived to be subject to more risk, either political or economic, will likely see higher demand for bank-intermediated trade finance.

There has been a widespread increase in the price of trade finance. More than 70 percent of respondents indicated that the pricing of various types of letters of credit increased, while close to 90 percent of respondents indicated that the pricing of both short-term and medium-term trade-related lending facilities increased (Figure 1).3 As a result, spreads over LIBOR have increased by some 25 to 300 bps per annum, with some respondents reporting figures as high as 600 bps per annum (although this may reflect some respondents reporting levels, instead of increments, in spreads).

International financial strains have been a significant factor driving up the cost of trade finance. Some 80 percent of the respondents indicated that an increase in the cost of funds has been a factor driving up the cost of trade credit, while 60 percent indicated that higher capital requirements have played a part (Figure 2). The near universality of these strains is shown by the similarity of responses between banks in advanced economies and emerging markets (although it should also be noted that most of the emerging market banks that indicated that capital requirements were a factor are headquartered in advanced countries).

In response to higher risks, a majority of banks have also adopted stricter risk management practices. For example, many banks are now adopting differentiated strategies based on the nature of the individual client, the client segment (trading, retail, commodities, etc), and country of origin. Banks underscored a greater focus on: (i) expanded insurance; (ii) shorter maturities and stronger covenants; (iii) higher cash deposits or other collateral from clients; and (iv) relationship deals. Evidence of higher counterparty risk is also a reason that many players are switching from open account terms to more traditional and secured instruments such as LCs, and cash-in-advance requirements.

A majority of banks anticipate current pricing trends to continue. This will involve more reliance on traditional finance instruments (such as letters of credit and guarantees) and greater focus on risk mitigation. Survey results indicate that emerging markets and commodities trade funding are likely to be hardest hit. However, a few banks note that spread increases may reverse once demand has picked up again. In addition, volumes may rise because of consolidation of the banking sector. When conditions normalize, the smaller number of surviving global and super-regional banks will likely end up providing more trade financing than currently.

Trade finance to and from emerging Asia appears to have been particularly hard hit. Advanced economy banks were asked to distinguish transactions they financed by type of trade (export-/import-related) and also by region. Intraregional trade among advanced economies seem to have been unaffected by the current crisis. There is, however, evidence that financing of both exports to and imports from emerging and developing Asian economies are being hit. In particular, while more than 50 percent of respondents indicated that financing exports to Middle East and North Africa have increased, a similar preponderance of respondents indicated that financing of imports from South Asia, Korea, and China (including Hong Kong SAR and Taiwan Province of China) have decreased. On possible interpretation is that the collapse of trade in East Asia may also indicate that rising costs and increased risk perceptions are having a particularly severe impact on low-margin links in long global valued-added supply chains.

Lastly, all banks foresee a significant role for the official sector in easing the current conditions. In particular, respondents took the view that governments and multilateral institutions can help by: (i) providing more trade guarantees; (ii) increasing availability of financial resources; and (iii) improving export insurance processes. Programs such as the IFCs” Global Trade Finance Program (GTFP) were also seen as providing significant relief. In terms of regulatory changes, respondents indicated that authorities and international institutions should review Basel II trade capital requirements and discourage late payments and collusion in the trade finance market.

The increase in price across a spectrum of trade finance products is easy to explain. With increased costs of funds to banks, higher capital requirements, and rising default risk affecting most responding banks all pushing prices in the same direction, it would be surprising if there wasn”t a clear trend toward increased costs during the October-November period. Looking forward, while cost of funds will likely come down at some point, increased capital requirements may have a longer lasting impact:

The mixed impact of the current crisis on the volume of trade finance may well reflect different responses to heightened risk. Increasing use of bank trade finance in advanced economies could be the result of a shift by exporters from open account financing to use of letters of credit. At still higher levels of risk aversion, however, some exporters may be shifting from bank financing to cash-in-advance or other “low-trust” approaches to financing as difficulties emerge in some markets, reducing the volume of trade finance.

Finally, causality in the interaction between recent trade and trade finance shifts runs in both directions. The higher cost of trade finance will inevitably mean that some transactions that made economic sense earlier are no longer profitable, reducing both trade and demand for finance. At the same time, the global slowdown is resulting in a sharp drop in merchandise trade.

The Fund plans to make a summary of these data publicly available, taking into account feedback from this conference and other sources. In addition:

BAFT sent questionnaires to their membership, but for confidentiality reasons could not share the list; additional surveys were sent out by the Latin American Federation of Banks (FELABAN). Accordingly, the response rate is not known.

As with all surveys, there is the risk of bias coming from self-selection. However, there is no particular reason to expect systemic biases in the underlying data.

Other data covering the entire fourth quarter as well as some early trade data suggest a continuing downward trend into December; for example, we understand that SWIFT messages related to documentary credit declined 27 percent in 2008 Q4 from the same quarter of 2007.

Effects on the Pricing of the Trade Finance Instruments 1/

Source of Changes in the Pricing of Trade Finance 1/ 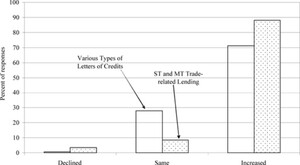 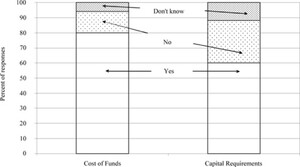 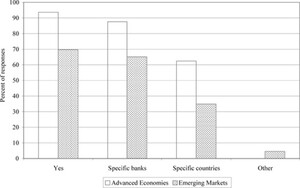