THE MACROECONOMICS OF SCALING-UP AID: THE CASES OF BENIN, NIGER, AND TOGO

Prepared by staff of the African Department

The following three notes1 assess the macroeconomic implications of the spending of scaled-up aid to Benin, Niger, and Togo in line with that promised by the G-8 at Gleneagles, Scotland in 2005. These assessments are prepared in response to a request from the UN.

In September 2007, the UN Secretary General launched the Millennium Development Goals (MDG) Africa Steering and Working Groups. The Steering Group brings together the leaders of multilateral institutions to identify practical steps needed for Africa to achieve the MDGs. The Managing Director of the IMF is a member of the Steering Group. The Working Group supports the Steering Group and is comprised of thematic groups in education, agriculture, health, infrastructure and trade facilitation, statistics, aid predictability, and MDG operationalization at the country level.

In addition to being co-coordinator of the thematic group on aid predictability (along with the Development Assistance Committee of the Organization for Economic Cooperation and Development) the IMF is supporting the work of the thematic group on MDG operationalization at the country level. This group is leading the preparation of “Gleneagles aid scaling-up scenarios” in 10 country cases, and the IMF has been requested to provide macroeconomic assessments of these scenarios. The scenarios are being developed for Benin, Central African Republic, Ghana, Liberia, Niger, Rwanda, Sierra Leone, Tanzania, Togo, and Zambia. The objective is to see if a dramatic boost in aid, promised at the G-8 Gleneagles Summit, can help countries meet the MDGs.

The scaling-up scenarios are based on sector-level analyses and spending plans by the country authorities. The UNDP, World Bank, and African Development Bank worked closely with country authorities in developing the spending plans. Following standard IMF practice, IMF staff are using several approaches to analyze the effects of the projected aid increase on key macroeconomic variables such as real growth, inflation, the exchange rate, and the current account balance, and to assess the implications of different policy choices. Two frameworks have been used for this exercise. The first approach is based on a traditional IMF macroeconomic model with a standard demand side, a production function—extended to include public capital with near term payoff (e.g., roads) and human capital with long-term payoff (e.g., education)—and reduced form trade equations for the external sector.2 This model was applied to Niger and Benin. The second approach relies on a dynamic stochastic general equilibrium model (DSGE), with nominal rigidities, microeconomic foundations and multiple sectors.3 This model is suited to address both demand-led issues and medium term implications (on capital accumulation and productivity) of aid expenditures; it has been applied to Togo and Benin. Given the current state of knowledge about macroeconomic relationships in African countries, staff believe it is fruitful to use and compare different models. Results from Benin indicate that the assessment is robust to the different models.

The main conclusions of the studies are as follows: 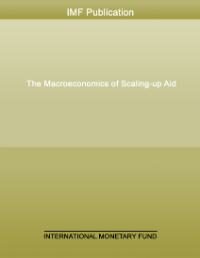 The Macroeconomics of Scaling-up Aid: the Cases of Benin, Niger, and Togo
Author: International Monetary Fund