1. As a result of the Dayton Peace Agreement in 1995, the Federation of Bosnia and Herzegovina and the Republika Srpska were created. At the same time the Federation and the RS agreed to introduce a currency board for an initial period of six years and to establish a market-based central bank, the Central Bank of Bosnia and Herzegovina. The new central bank had to develop central bank operations from the remnants of the former National Bank of Bosnia and Herzegovina and also to confront a large number of challenges related to the unsettled political environment: (a) the drafting of central bank legislation; (b) the power-sharing in the CBBH Board; (c) the role and power of CBBH branches in the Federation and in the RS; (d) and (one of the hottest debates) agree on the name of the new currency. Finally, after most of these issues were resolved, the central bank law was adopted on June 20, 1997, and the CBBH opened its doors on August 11, 1997, with an equal amount of monetary liabilities and foreign currency assets.

2. This report summarizes the findings of an evaluation of the technical assistance delivered by MFD to the CBBH.1 The assessment was conducted during a visit to Bosnia and Herzegovina during the period March 15-17, 2006 (see Appendix for a list of contacts). It covers the period 1997-2005, although MFD TA started earlier: two brief MFD staff visits took place in 1996 to assist the authorities in preparing legislation to establish a currency board and create a market-based central bank.

3. As background for the TA evaluation, all MFD reports prepared by MFD missions and selected expert papers were reviewed. During the visit to the CBBH all the main staff responsible for the various departments were interviewed. In a few cases, CBBH staff was not entirely familiar with the work of MFD missions and experts because they joined the Bank at a later stage. However, in most cases, CBBH staff was very familiar with the TA program, and provided excellent cooperation and feedback. In addition, several MFD experts were interviewed or contacted by phone or e-mail to provide feedback and views on the TA delivered to the CBBH. Finally, Fund staff from EUR and MFD associated with the TA program were consulted. In all cases, full cooperation was provided, which greatly facilitated the TA evaluation.

4. The rest of the report is organized as follows: Section II provides an evaluation of the delivered TA (ownership, objectives, delivery modalities, and coordination within IMF Departments and with other TA providers). Section III presents an analysis of TA effectiveness, and Section IV concludes with some considerations for future TA.

5. The overall assessment is very positive. MFD’s TA has had a significant impact on the capacity-building program of the BiH authorities, and even though at the beginning a foreign expert was appointed as the governor, the CBBH is now operating efficiently with BiH officials fully in charge of all CBBH operations. The currency board has been working without problems, and BiH has an accounting and modern payment system in line with EU standards. As a result of the overall progress achieved in the financial sector and other economic areas, BiH has experienced a continued strengthening of economic activity, low inflation, and growth in international reserves.

6. Notwithstanding the positive evaluation, some issues, most of which of marginal relevance, are raised in this appraisal. These are partly related to the modalities of delivering TA to the CBBH. To some extent the existence of the Federation and the RS and two supervisory agencies has affected the delivery of the TA provided, and delayed the implementation of some recommendations, in particular in the area of banking supervision.

A. Ownership of the TA Program

8. The authorities have full ownership of the TA program. Some questions were raised in this area, insofar as following the Dayton peace agreement the first two governors of the CBBH were foreigners and IMF appointees. After consulting with BiH officials who were involved in the creation of CBBH and familiar with the initial arrangements, it appears clear that since its inception the authorities fully shared the objectives of the TA program, and never had reservations regarding the modus operandi of MFD’s TA delivery. As part of the Dayton agreement, the authorities endorsed the creation of the CBBH, the adoption of the currency board, and the need to have TA from the IMF to support its operations. The latter included the initial appointment by the IMF of a foreign governor, given the delicate political situation and the power struggles between the ethnic groups in BiH. Therefore, the authorities had the ownership of the project since the beginning. In addition, the presence of BiH nationals (including a vice-governor) with voting power as board members of the CBBH and the appointment of BiH nationals to head the key departments of the central bank ensured the continuity of ownership of the TA program over time.

B. Objectives of the TA Program

9. Overall, most of the objectives of the TA program have been achieved. As indicated above, and as confirmed in the discussions, the BiH authorities were fully informed and aware of the TA objectives. In all cases, the authorities had the opportunity to interact with MFD staff and experts and share with them results and problems to be addressed.

10. One notable delay in TA implementation was experienced in the area of banking supervision. In particular, the planned consolidation of the two agencies into a supervisory unit at the CBBH has not yet been done, owing to political problems and power-sharing issues. It appears, however, that this issue may be resolved soon as a new law is being presented to Parliament to consolidate the supervisory agencies.

11. Another objective that has been only partly achieved is the creation of a full-fledged Research Department. The presence of an MFD expert in this area has helped considerably in setting up research activities. However, the CBBH has not placed high priority on the development of this department as recommended by MFD, owing to lack of resources, and, to some extent, the need to give priority to its operational areas.

12. MFD adopted a mix of advisory missions, long-term experts, and short-term expert visits to deliver TA to the CBBH (Table 2). Overall, this approach has worked well and produced good results. Some questions were raised on the effectiveness of investing resources in research activities, in view of the lower priority given by the CBBH. Also, in some areas such as payments system, reserves management, and accounting, the CBBH would have probably benefited more from hands-on advice and the presence of a short-term expert at the CBBH than from detailed reports left by experts.

Includes TA delivered on the topic of Information Technology.

Includes TA delivered on the topic of currency transition.

Includes TA delivered on the topic of Information Technology.

Includes TA delivered on the topic of currency transition.

13. There is a consensus regarding the high quality of the staff and experts that have worked in this TA program. The authorities have appreciated the competence demonstrated, and expressed their satisfaction with the quality of the advice delivered at all times. Some questions were raised about the performance of the first governor, who was appointed directly by IMF management. Some officials were happy with his work while others, including Fund staff, found that he was not fully prepared for the task. The authorities also noted the lack of continuity in MFD’s mission chiefs to CBBH. Even though the authorities were very satisfied with their performance and role, they would have preferred a lower turnover in MFD mission chiefs.

D. Coordination of TA Program With other IMF departments

14. Overall, coordination between EUR and MFD has been good, and has improved over time. The staff of the two departments has worked together on all major issues at headquarters and in the field. In the latter case, Fund resident representatives participate in the final meetings with MFD missions, and are in contact with MFD staff while in the country. On the other hand, EUR staff is not fully informed about short-term expert visits, and some improvement in this area would be beneficial to further strengthen cooperation.

15. The CBBH authorities were less positive about the assistance provided by the Financial Department (FIN) in the area of accounting. Apparently, FIN staff somewhat complicated the CBBH chart of accounts that was prepared with MFD assistance, and it took time to reconcile the advice of the two departments. Similarly, some complications were created by the Statistics Department (STA) in the area of monetary statistics because of the inconsistency between the BiH chart of accounts and STA’s presentation of monetary data.

With other TA providers

17. In this section, an attempt is made to provide some concrete evidence of the impact that MFD’s TA had on the CBBH, the financial sector, and the economy as a whole. A cost-effectiveness analysis for each project is not possible because there is no available database to compare the costs of TA in similar areas in other countries. However, it can be certainly stated that in the case of the payments system (financed by USAID and managed by MFD), the project was very cost-effective, considering that similar projects undertaken in other former Yugoslavian countries used considerably more resources and time. Once agreement was reached, it took about nine months to complete the technical project compared with more than a year in other Yugoslavian countries.

18. In order to better appreciate the impact of MFD’s TA on the CBBH, it is important to emphasize that no central bank or market-based financial sector existed in BiH at the time of the Dayton agreement. Further, a very peculiar payments system, one completely different from EU standards, was operating at that time. Also, there was no formal bank supervision system, and the accounting system was not in line with international standards.

19. Considering that intensive TA started in late 1997, the progress made in a few years is remarkable. Currently, BiH has a well functioning financial sector, with private banks, an efficient payments system, ATM machines, and two separate (temporarily) supervisory agencies. BiH nationals run the CBBH via the Executive Board and manage all departments.

20. The progress achieved by the CBBH in developing a sound financial sector has had an impact on the economy as a whole. As shown in Table 3, since 1999 the economy has grown at an annual average of some 5.7 percent, while inflation has been reduced from more than 13 percent in 1998 to less than 1 percent during 2002-2004. The size of the financial sector as measured by the M2/GDP indicator has more than doubled from 24 percent to about 55 percent. Also, foreign reserves have more than doubled, and commercial banks’ total assets more than tripled. Finally, credit to the private sector has more than quadrupled. The latter, however, has been a matter of concern, and an MFD mission provided advice on how to deal with excessive credit growth. The authorities have responded promptly to MFD’s recommendations.

21. At the CBBH level, MFD’s TA has been very effective in building institutional and operational capacity, as shown below:

22. On the basis of the experience gained in BiH, the following are some suggestions to consider for future TA in other post-conflict countries: 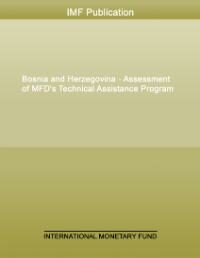