What Hinders Investment in the Oil Sector?

What Hinders Investment in the Oil Sector?

What Hinders Investment In The Oil Sector?1

1. Following substantial increases during the 1970s and early 1980s, productive capacity in the oil sector has stagnated relative to the growth in global oil demand. In particular, OPEC’s current capacity is lower than 1978 levels. Despite some recent pickup, upstream investment has been held back by low and unpredictable real prices, substantial excess capacity, and political/institutional constraints.

2. The resulting reduction in spare capacity has increased the sensitivity of oil prices to actual/potential supply disruptions. Higher demand for OPEC oil has been met by asignificant draws on OPEC surplus capacity—estimated at around 10 mbd in 1985. Global spare capacity fell below 1.5 mbd at the end of 2004 owing to exceptionally strong growth in oil demand of around 2.7 mbd—the largest increase since 1976.

3. Looking ahead, crude oil is likely to remain a major source of energy over the next three decades, requiring large upfront investments. Moreover, conventional non- OPEC production is expected to peak around 2010 owing to rapid depletion of existing fields and net declines in proven reserves. As such, most of the incremental capacity will need to come from OPEC, which presently controls around 80 percent of proven oil reserves (or 70 percent if Canadian tar sands are included).

4. Against this background, this note outlines the obstacles to investment by international and national oil companies (IOCs and NOCs). It identifies a number of different types of impediments: those affecting all investors, such as the level and volatility of prices and the size of spare capacity; those specifically affecting NOCs, for example funding and technological obstacles; those limiting investment opportunities for IOCs, such as limits on foreign investment and taxation policies in oil exporting countries; and lastly those relating to environmental regulations (especially in downstream projects).

5. The note also assesses the prospects for increased investment and higher spare capacity. It argues that, given their large share of oil reserves and low production costs, the behavior of Middle Eastern members of OPEC is key to future capacity expansion in the oil sector. Although non-OPEC countries have some incentive to respond to the higher prices by increasing investment and production, they are ultimately constrained by their lower reserves. Uncertainties about OPEC’s investment behavior and its cost advantage are also likely to remain a disincentive.

A. Price and Demand Uncertainties

6. Low real oil prices of the past two decades were a major factor in restraining upstream investment. In the absence of detailed investment data, especially for OPEC members, investment is proxied by a measure of rig activity.

7. The unpredictability and volatility of oil prices and demand have also contributed to low investment, by blurring the distinction between transitory and permanent price movements and hence permanent cash flows. Given the large upfront outlays involved, the long gestation periods, and the irreversible nature of investment in the oil sector, uncertain cash flows tend to delay additions to productive capacity. Investment decisions are further complicated by the unpredictability of long-term crude oil demand and its sensitivity to global growth, national policies toward the energy sector, and the rate of development and adoption of new technologies. For example, lower-than-expected demand in the 1980s led to significant increases in spare capacity amongst OPEC members.

B. Specific Constraints in the Case of Oil-Exporting Countries

8. Competing demands for social and infrastructure expenditures and, in some cases, high public debt levels has limited the funds available for investment in the oil sector. NOCs are generally required to surrender oil revenues to the government (for example in Saudi Arabia since 1983) and compete with other state-owned companies for funds, with the final allocation not necessarily based on contribution to revenues or profitability. Increased financial autonomy for NOCs could be a solution, but this could complicate overall fiscal management. NOCs’ ability to obtain credit for investment from private capital markets is often limited by a lack of transparency and perceptions that these companies are inefficient.2

9. Limited openness to foreign investment is often a major disincentive for international oil companies (Annex 1). A large share of the world’s easily exploitable oil reserves lie in the Middle East. However, major oil exporters like Saudi Arabia and Kuwait (and outside the Middle East, Mexico) remain largely closed to foreign investment, while in other countries, such as Iran, complex production-sharing and buyback deals discourage IOC involvement. For their part, IOCs have contributed to the problem by showing limited understanding of the nature of the host countries’ dependence on oil and their strategic objectives. Limited foreign participation in investment has also prevented some countries from fully benefiting from the major technological advances that have taken place in the past two decades in the oil sector. These are mostly patented by U.S.-based international oil service companies.

10. Uncertainty about licensing and fiscal terms offered by host governments could also impede foreign investment. The rate of government take (taxes and royalties as a share of profits) varies considerably between countries according to the maturity of the upstream sector, short-term economic and political factors and investment risk. Government take is typically lower in regions with a mature oil industry and relatively high extraction costs, such as the North Sea, and highest in those countries with the largest production potential and lowest development costs. In addition, scarcity of funds sometimes forces the host government to raise taxes and royalty rates after the investment is completed—at the risk of discouraging further investment. Frequent changes that retrospectively affect the taxation of sunk investments force investors to raise their hurdle rates for future investment decisions to levels that are high enough to accommodate the higher perceived risk. Recent increases in royalties and taxes in Venezuela, Russia, and Kazakhstan, for example, will add to government revenues but could discourage investment by IOCs.

11. Foreign participation has also been affected by geopolitical developments—in particular, political tensions in Iraq, Venezuela, and Nigeria, and economic sanctions on Iran, Libya, and Iraq—which have increased perceptions of higher medium-term risk.

12. Downstream investment (pipelines, refineries, tankers) has also lagged behind the growth in global oil demand in recent years, contributing to bottlenecks in derivative products markets (such as gasoline and distillates) and weakening the ability of the oil market to deal with temporary imbalances. Global oil refining capacity is only slightly above 1980s levels. Shipping charges also rose substantially in 2004.

13. Existing refining capacity, especially in developing countries, is biased against distillation of heavy crude oil. This bias contributed to a significant rise in light-heavy crude oil price spreads in 2004, when the marginal barrel from OPEC was heavy, and light sweet crudes were in limited supply due to temporary supply disruptions.

14. The main obstacle to downstream activity in industrial countries has been environmental considerations. Worries about the harmful effects on the environment are raising the risk of investment in several countries. This is especially the case in the U.S., where strict environmental standards make it extremely difficult to justify the building of new refineries. The last refinery built in the U.S. was in 1976. Even when investment is allowed, environmental regulations and policies may drive up capital costs, causing delays.

15. Extensive investment in the oil sector will be required to meet future oil demand and maintain sufficient spare capacity, especially as countries like China and India industrialize. The investment cost is conservatively estimated by the IEA to be around US$90 billion per year out to 2030.

16. Given available information on proven reserves and the current state of technology, OPEC’s share of world production is projected to increase over time. The location of proven world crude oil reserves is far more concentrated in OPEC countries—especially those in the Middle East—than current world production. Moreover, non-OPEC reserves are being depleted at a faster rate than those available to OPEC. While additional reserves could be found—facilitating an increase in non-OPEC production (as in the 1970s)—non-OPEC reserves as a percentage of proven global reserves have declined significantly during the past three decades.

18. OPEC’s official policy is to balance the market and maintain oil price stability. This policy is based on the idea that prices should be sufficiently high to provide adequate revenue and incentives for additions to capacity, but not too high to encourage aggressive supply responses from non-OPEC producers and permanent shifts by consumers toward non- conventional sources of oil (for example, Canadian tar sands) or alternative energy sources.

19. Looking ahead, OPEC’s targeted level of spare capacity may not be sufficient to stabilize the market. OPEC has indicated that it will continue to be the “supplier of last resort” and aim for at least 1.5 million barrels of spare capacity. This level, however, is unlikely to be sufficient to stabilize prices and deal with potential supply disruptions. Since 1973, there have been some major disruptions. The 1978/79 Iranian revolution resulted a shortfall of approximately 5.6 mbd for a period of 6 months, while the 1991 Gulf crisis reduced output by over 4 mbd. In both instances, spare capacity was well above the target level of 1.5 million barrels per day. As such, a level of spare capacity in excess of 3-4 mbd might be needed to act as a stabilizing influence on markets.

20. Non-OPEC oil producing countries’ investment behavior will ultimately be constrained by their access to proven reserves. According the most analysts, non-OPEC production will likely peak by 2010. While Russia’s output has increased significantly since the 1990s, the rate of growth in production is expected to decline. Substantial capacity increases are likely only in West Africa. Meanwhile, high oil prices and OPEC’s possible wait-and-see approach should encourage non-OPEC producers to increase capacity, but uncertainties regarding OPEC’s investment behavior and its ability to produce low cost oil would remain a disincentive.

21. As for IOCs, while drilling activity seems to have increased recently, at present there is insufficient evidence to suggest that they are ramping up their investment plans. While oil companies’ indebtedness is low and dividends and buybacks have increased, capital expenditure has only modestly grown. IOCs may also be constrained by years of cost cutting—owing to low oil prices—which has resulted in shortage of qualified staff and equipment.

22. IOCs also appear to be cautious in revising their price expectations. While long-dated futures prices remain well above $30 and prospects for demand remain strong, major oil companies’ pricing assumption is in the $20-25 range, reflecting historical averages.

23. Although higher oil prices, if they persist, should encourage investment in the oil sector, many impediments remain. These include the experience with the large spare capacity overhang in the 1980s, and the high cost and long gestation periods of investments in the sector. Moreover, the role that OPEC will continue to play as a market maker may prevent a quick pickup.

24. As a result, the market is likely to remain tight over the medium term, requiring significant increases in OPEC production. The IEA projects demand to grow rapidly—especially from developing countries—by around 38 mbd by 2030. With non-OPEC production expected to increase by only 8 mbd over this period, the call on OPEC will double relative to today’s levels.

25. Of course, future improvements in technology and market forces (especially higher oil prices) could increase non-OPEC oil production and energy efficiency, thereby reducing demand for OPEC oil. However, such improvements are difficult to predict and, based on current trends, OPEC appears likely to maintain its reserves and cost advantages over non-OPEC producers—even when non-conventional oil (such as Canadian tar sands) becomes viable.

26. As for downstream investment, refinery capacity in industrial countries will likely remain constrained by environmental concerns. Additions to refining capacity, therefore, will likely be concentrated in developing countries. Countries like India are already exporters of refined products and demand for their exports may increase over time.

A summary version of this note will also appear in the Board Paper on Oil Market Developments and Policy to be discussed by the Board in early March.

(millions of barrels per day)

(millions of barrels per day)

(US dollar per barrel) 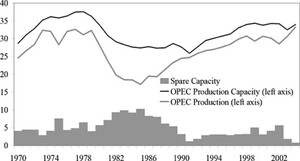 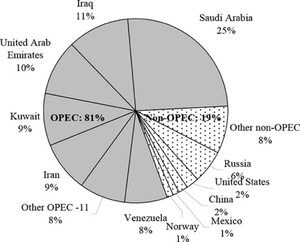