We would like to thank Paulo Mauro, Ruud de Mooij, Maurice Obstfeld and seminar participants at the IMF for their helpful comments. We are also grateful to Melanie Arntz, Terry Gregory and Ulrich Zierahn from the OECD for sharing their results.

Automation is hardly a novel phenomenon. Traditional sectors such as agriculture and manufacturing have already experienced large substitutions of labor with machine capital. But computerization of white-collar services in many advanced economies, such as logistics and tax preparation, has accelerated in recent years (Acemoglu and Restrepo, 2018). At the same time, progress in machine learning is further expanding the set of activities that can be performed more efficiently by computers than humans, such as image and speech recognition, natural language processing, and predictive analytics (Brynjolfsson, Mitchell, and Rock, 2018), suggesting a significantly broader scope for task automation over the medium-term.

See the routine vs. non-routine task typology of Autor, Levy, and Murnane (2003).

Using the occupational task data from the Dictionary of Occupational Titles, Autor, Levy, and Murnane (2003) show that routine-task intensity predicts workers’ exposure to computerization in the US. Goos, Manning, and Salomons (2014) extend the task-based approach to 16 western European countries to show that routine-biased technological change decreases employment mainly in the middle-skill occupations. Using data on occupational distribution of 85 countries, Das and Hilgenstock (2018) find that developing economies are significantly less exposed to routinization than advanced economies but the risks of routinization have risen globally over time.

In addition, the survey contains demographic information and measures of literacy, numeracy, and problem-solving skills for each respondent. Annex I contains further details on country and variable coverage.

We calculate the RTI index at the individual level using task composition of each survey respondent. This allows us to relax two important assumptions relative to the previous literature using US-based occupational routineness estimates: (1) workers perform identical tasks within occupations across countries; and (2) workers have access to the same technologies across countries.

Das and Hilgenstock (2018) show that exposure to routinization is driven by the declining price of investment goods, the structure of employment (high manual-intensive agriculture versus high routine-intensive clerical work) and job offshoring, in advanced economies. IMF (2018) finds significant cross-country variation in ICT prices and rapid growth of the gig economy, both of which may affect our estimates of job routineness levels.

Our results are consistent with the existing literature, which attributes differences in earnings to gender disparities along both the extensive margin of FLFP—share of women in the labor force (Olivetti and Petrongolo, 2014)—and intensive margin—uneven distribution of women across sectors and occupations (Hsieh and others, 2013; Ngai and Petrongolo, 2017). Differences in educational attainment have also been found to be large drivers of documented gender wage gaps (Altonjii and Blank, 1999).

The impact of RTI differences on the wage, and therefore the wage gap, is linked to the prevailing structure of production and whether it favors skill sets that are relatively unequally distributed between the genders. For instance, Black and Spitz-Oener (2010) find that the demand shift towards non-routine tasks in the labor market and women’s increasing share of non-routine tasks in the workplace has narrowed gender wage inequality in Germany. Bacolod and Blum (2010) show that the gender wage gap in the US narrowed owing to increasing returns to cognitive and interpersonal skills, with women having higher participation in jobs requiring these skills.

This is calculated as the present value of 5 percent of the average US pay gap (assuming the gap is $171 per week, $9 approx. is attributable to RTI), applied over a 20-year working period and applying a 4 percent annual rate of return.

Our approach follows Arntz, Gregory, and Zierahn (2017). Hawksworth, Berriman, and Goel (2018) use a similar framework, but focus less on the gender dimension.

Most studies assume that all individuals within an occupation are assigned identical tasks. In such a setup, differences between men and women’s exposure to automation can only arise from dissimilar modes of participation in occupations that face different risks of automation. This assumption obscures the fact that gender differences in exposure to automation can also arise from variation in task assignment at the workplace. Additionally, estimating automation probabilities at the occupational level assumes that all tasks within an occupation are automatable. This is likely to overstate automation probabilities, given that many occupations will entail a mix of tasks, not all of which can be automated at the current level of technology.

As foreshadowed in the previous section, the likelihood of automation increases with the RTI level. Our estimates for the probability of automation line up with Autor, Levy, and Murnane’s (2003) task framework, with the probability of automation having a strong, statistically significant, positive relationship with the degree of routineness of work tasks and a statistically significant negative relationship with the abstract and manual components of the RTI index (See Table A3 in Annex III).

IMF (2018) finds that labor force participation in the 15–24 age bracket has fallen over the past few decades owing to higher returns from schooling.

Dauth and others (2017) show that, for the manufacturing sector in Germany, greater use of robots entrenches older workers into their jobs and lowers employment by reducing new-job creation.

The The Global Gender Gap Report 2017 (WEF, 2017) from the World Economic Forum shows that in only 27 of the 144 sample countries, the gender gap in education at the primary, secondary, and tertiary level is fully closed. However, there has been consistent progress globally in narrowing the gap over the past decades. In OECD countries, the gender gap in secondary and college education has, in fact, been reversed (OECD, 2015).

Deloitte (2017), for instance, finds that 80 percent of small businesses in the US are not fully utilizing digital technologies, and the biggest reason cited for their lack of use is not resource constraints, but a perceived irrelevance of technology to their work.

In combination with the PIAAC data, we use the International Adult Literacy Survey (IALS) survey, conducted between 1994 and 1998. We compute occupational shares for men and women in 17 OECD countries, for which IALS is available (see Annex I for country coverage).

The ILO produces employment estimates based on labor force surveys, using ISIC classifications that can be matched with sectors in the PIAAC data set. We employ the most recent estimates for 2017. We use the average probability of automation at the sectoral level in our sample and apply it to sectoral population estimates from the ILO in order to arrive at total jobs at risk across all sectors globally.

McKinsey (2016) points out that while the skill content of the work of bookkeepers and accountants is higher than a cook, the cost of automating the tasks of the former are significantly lower than the latter.

For instance, Zervas, Proserpio, and Byers (2017) find that the entry of Airbnb leads to revenue declines in the hotel industry, which will have implications for labor demand in the industry.

Emerging market economies show encouraging counter trends: with more than 260,000 female tertiary ICT graduates in 2015, India is the country closest to gender parity in this field, followed by Indonesia (OECD, 2018).

The Bureau of Labor Statistics in the US predicts that health care industries will account for the largest share of new jobs created during 2016–26.

Caregiver credits—pension credits provided to individuals who have spent time out of the workforce (e.g., in many EU countries)—are also increasingly used to bolster retirement security for women. However, care should be exercised in the use of benefits that can lower incentives to remain attached to the labor force, such as prolonged paid parental leave which can deteriorate future employment opportunities (IMF, 2012).

Gender gap in STEM fields grows with age: 15-year-old girls are two times less likely to aspire to a career as an engineer, a scientist, or an architect (OECD, 2018). Dasgupta and Stout (2014) and Dasgupta and Dennehy (2017) find that peer mentors, especially female mentors, are critically important in raising the retention rate of women in STEM fields. A growing number of countries are introducing explicit support for women in their education or child care to prevent them from dropping out of demanding careers in science and technology (e.g., Australia, Germany, Italy, Japa,) and tackling stereotypes in education (e.g., France).

IMF research finds that women accounted for less than 2 percent of financial institutions’ chief executive officers, and less than 20 percent of executive board members are women (Sahay, Čihák, and others, 2018). The presence of women as well as a higher share of women on bank boards, however, is associated with greater financial resilience.

Future work will delve deeper into differences between age groups in exposure to routine tasks and the threat of displacement on a sectoral, occupational, and country level.

We exclude the Russian sample because it is not representative for Moscow and the Moscow region. For Germany, we separately obtain wage data from the GESIS Leibniz Institute for the Social Sciences.

The EM estimation is carried out for the US sample only, since Frey and Osbourne’s (2017) probabilities are calculated for US occupational descriptions. Once the model converges on the US sample, the estimated parameters are used to construct individual probabilities for the full sample, using their own individual sample characteristics 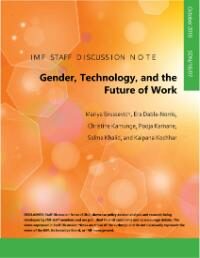 Powered by PubFactory
Close
Table A4.

Estimation of Probability of Automation