This paper briefly describes the factors constraining the social protection policies in the Baltics, Russia, and other countries of the former Soviet Union (BRO). The analysis considers public spending in social programs, including generalized subsidies for goods and consumer services, pensions, unemployment-related and social benefits, and education and health care. The paper then lists policies that can help mitigate the worsening living standards of the poor and the vulnerable in a fiscally sustainable manner.

This paper briefly describes the factors constraining the social protection policies in the Baltics, Russia, and other countries of the former Soviet Union (BRO). The analysis considers public spending in social programs, including generalized subsidies for goods and consumer services, pensions, unemployment-related and social benefits, and education and health care. The paper then lists policies that can help mitigate the worsening living standards of the poor and the vulnerable in a fiscally sustainable manner.

Since early 1992, most former centrally planned economies in the Baltics, Russia, and other countries of the former Soviet Union (BRO) have implemented economic reforms to engender market orientation of their economies. Economic transition, while correcting price and other distortions in the face of a more binding macroeconomic constraint, has been accompanied by sharp declines in recorded output and high rates of inflation in the initial years of reform, followed by falling formal sector employment in more recent years. Inadequate reforms and their slow pace have prolonged the output-deterioration with important implications for social protection. Declining government revenue in relation to GDP, combined with insufficient attention to targeting of public programs to the truly needy, has worsened the plight of the poor and vulnerable households.2 This has resulted in severe hardships for many households, particularly those with large numbers of children and those headed by single pensioners, the unemployed, and females.

Although output decline has been reversed in most of the BRO, and prices have stabilized (Figure 1), policymakers are faced with the challenge of addressing deteriorating social indicators, rising unemployment and underemployment, increasing incidence of poverty, and widening income inequality (Figure 2 and Figure 3).3 This paper briefly describes the factors constraining these countries’ social protection policies to shield the poor and vulnerable. It then lists policies that can help mitigate the worsening living standards in a fiscally sustainable manner. The analysis in this paper considers public spending on social programs, including generalized subsidies for goods and communal services, pensions, unemployment-related and social benefits, and education and health care.

Declining taxes and social contributions have weakened the ability of the BRO to provide the needed social protection. In most of the BRO, revenues in relation to GDP, including those from taxation of wages to finance social benefits, have fallen (Figure 4).

The principal reasons for the decline are:

Excessive privileges to numerous groups are straining budgets and distorting resource allocation. In many countries, privileged consumers are entitled to reduced tariffs for energy, telephone, housing, communal services, and transportation. Low prices have created incentives for overconsumption and misuse These benefits accrue not only to those eligible but also to their family members. Consequently, large segments of the population benefit from these privileges, at a high cost to the budget and the enterprises providing these services. In addition, some generalized subsidies, both implicit and explicit, continue to be provided for certain types of goods.

Many countries continue to provide benefits that should not be part of the social insurance system. A significant share of the resources collected through social contributions are still allocated to spa and recreation facilities that are only offered to certain population groups.

The benefit structure has yet to be reformed in many countries. Pension systems in many of the BRO allow workers to collect pensions at a relatively young age, and workers in certain occupations are eligible for pensions even earlier. In general, the normal pension age for both men and women is low by international standards—especially in comparison with life expectancy at the time of reaching pension age (Figure 6). Pensions are based not only on the number of years of contributions but also on years spent studying or taking care of a young child. Some of the pension system reforms have not improved their short-term financial viability. Unemployment benefits are relatively small, difficult to obtain, and/or paid with a long lag. This has discouraged the unemployed from applying for benefits. A large proportion of social contributions collected for assisting the unemployed continue to be wasted on low-priority programs as well as on administration of benefits. A relatively small proportion of the unemployed actually receive assistance in any form.

The reform of the education and health care sectors has been slow in most of the BRO despite significant allocations from the budget4. In most of these countries, about 70 percent of government employment is in these two sectors.5 The average wage in both sectors is low in relation to the economywide average wage. The education sector is facing the following constraints:

In the same vein, the health care sector is faced with the following constraints:

The implementation of most of the following reform options would help shield the poor and vulnerable from the adverse consequences of the transition to a market economy, while ensuring macroeconomic stability.

In the education sector:

In the health care sector:

The worsening of income inequality in the BRO on average has been significantly higher than the comparable average for countries such as Bulgaria, the Czech Republic, Hungary, Poland, Romania, the Slovak Republic, and Slovenia (see Milanovic, 1998).

The average public spending on education and health care in relation to GDP in the BRO countries fell from 6.4 percent and 3.5 percent in 1992 to 4.1 percent and 2.7 percent in 1996, respectively (Chart 4). This decline, however, understates the resource squeeze facing these sectors in light of large contraction in real GDP since the onset of economic transition.

Employment in both education and health sectors has increased in recent years (see IMF, 1998).

The average spending on hospitals is estimated at 56 percent of total health care expenditures in a sample of five countries in the BRO.

There are seven countries in the BRO that have legislated a reform of the first, pay-as-you-go pillar (see Rutkowski, 1998).

Total Revenue, Total Expenditure, and Social Spending in the BRO, 1992-96 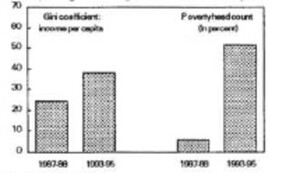 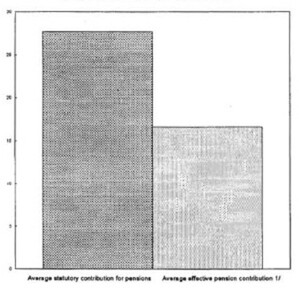 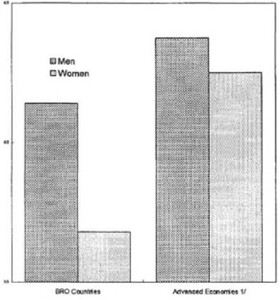