2020 Article IV Consultation-Press Release; Staff Report; and Statement by the Executive Director for Republic of Kosovo

2020 Article IV Consultation-Press Release; Staff Report; and Statement by the Executive Director for Republic of Kosovo

On behalf of the Kosovar authorities, I would like to thank the Mission Chief for Kosovo, Gabriel Di Bella and his entire team for the very constructive and productive discussions. While the results achieved by the authorities in many areas were confirmed by staff, many opportunities for further reforms and improvements were identified. The authorities broadly share staff’s assessments and recommendations.

At the onset of the pandemic, the Kosovo Government took decisive measures to contain the spread of the virus, including domestic and international travel restrictions. However, after easing those restrictions, infections spread rather quickly across the country and various restrictive measures were re-introduced to ease the pressure on the health sector.

To limit the economic and social impact on citizens and businesses, the government designed and implemented targeted support schemes. This led to a significant increase in government spending, and thus, to a higher budget deficit and public debt. Nevertheless, the fiscal position remains healthy, with public debt well below the regional median at around 24.5 percent of GDP, while the performance of the financial sector remains strong and the structural reform agenda continues to be a priority, despite political challenges.

Following economic growth of 4.9 percent in 2019, the authorities estimate negative GDP growth of around -6.7 percent (staff estimates a GDP growth of -6 percent) for 2020, due to the significant impact of disrupted international trade, reduced production capacities, and a sharp decrease in business turnover.

Overall, investments are estimated to have dropped by almost 20 percent; exports by 18 percent; imports by around 10 percent, whereas consumption remained stable, given the government’s targeted cash support. Within total exports and imports, services suffered the most, in particular diaspora-tourism receipts, due to international travel restrictions.

Despite the decrease in imports and increases in the inflow of remittances by 14.8percent, the current account deficit increased from 5.5 percent to around 7.5 percent of GDP. This increase was financed by external borrowing, including a purchase under the IMF’s Rapid Financing Instrument of Euro 51 million, 0.8 percent of GDP, and drawing down international reserves.

With respect to the outlook, the authorities project a speedy recovery, with significant contribution from planned budget spending in various recovery-related programs. Nevertheless, given the continuing health challenges and uncertainties around the timing of COVID-19 vaccines, the initial growth estimates may be subject to downward revisions. The difference of the authorities’ projection of GDP growth of 5.2 percent, compared to Fund staff’s 4.5 percent estimates, can partly be explained with the timing of the projections, with the authorities having completed their projections earlier in the context of the 2021 budget process. The main drivers of growth are expected to be exports, especially services, and private investments, which are supported by a projected increase in credit activity. Beyond 2021, growth is expected to stabilize at around 4 percent.

Given the overall drop in demand during 2020, inflation remained relatively stable and is expected to increase, in line with the revival of the economy and the recovery of imports to pre-COVID levels of 2.0 percent in 2021.

Despite the challenges in 2020, the authorities remain fully committed to maintain and further strengthen fiscal discipline. Budget revenues were close to 9 percent lower than in 2019, due to the slower economic activity. Taxes contributed the most to this decline, with border tax collection being 11 percent lower than in 2019, partly reflecting the drop in imports. On the other hand, budget expenditures increased, due to the government’s COVID-related programs to support businesses and citizens, and additional allocations to the health sector as well as other institutions involved in fighting the pandemic. Compared with 2019, primary spending increased by around 6.5 percent in 2020. The most significant increase occurred within subsidies and transfers, which were 38 percent higher than in 2019, as COVID-related expenditures were included under this category. Contrary to transfers, execution of capital investments was significantly lower than budgeted, partly due to COVID-restrictions, but mainly due to the political environment.

The primary deficit surpassed significantly the 2 percent deficit rule, which was temporarily relaxed by the Assembly, to accommodate the challenging circumstances, with the explicit intention to gradually return to the rule by 2023. While the primary deficit was above 7 percent, this also includes spending financed externally by IFIs as well as spending funded by privatization proceeds, both excluded from the deficit rule of 2 percent. Hence, the deficit, as per the legal rule, was lower (5.8 percent).

The authorities introduced legal changes to allow contributors of the second pillar pension system (defined-contribution scheme managed by the Kosovo Savings Pension Trust (KPST)), to withdraw 10 percent of their assets (roughly EUR 200 million), as part of the government’s efforts to increase aggregate demand. While the assets under management of the KPST are not included in the consolidated government financial accounts, the government has pledged to reimburse a portion of the withdrawn assets in future years, thus creating a future liability.

Within the 2021 budget, the authorities have planned to continue with targeted support to the private sector, via the ‘economic recovery program’. However, there is a need for additional financing to close the deficit gap, and importantly, to keep adequate fiscal buffers and this will be addressed in the coming months.

Going forward, to continue with the planned investments in a number of priority sectors and to close infrastructure gaps, the authorities have agreed with staff to amend the so called ‘investment clause’ which allows the government to budget beyond the 2 percent deficit rule for capital projects financed by IFIs. Given that this ‘clause’ will expire if the stock of debt reaches 30 percent, which risks materializing due to the pandemic, the threshold will be increased to 40 percent. On the ‘regular’ deficit, the authorities are committed to returning gradually to the original rule of 2 percent deficit.

The reforms implemented by the Central Bank of Kosovo (CBK) in previous years, which focused on strengthening the financial safety net and banking supervisory framework, helped mitigate the pressures from the pandemic. Many of the reforms implemented have been designed with IMF support, and the CBK remains committed to continue strengthening its capacities and systems, including by implementing FSSR recommendations.

Overall, the financial sector managed to perform well, with the banking sector growing by more than 12 percent; deposits which comprise more than 90 percent of liabilities increased by 11.5 percent and outstanding loans by 7 percent. At the end of 2020, the capital adequacy ratio stood at 16.7 percent. To ease the pressure on businesses and citizens, the CBK introduced a temporary moratorium on loan repayments. Further relaxation on restructuring requirements for loans were introduced, by allowing lending institutions, based on individual requests, to restructure repayment schedules. Such restructurings were exempted from the requirement to lower the grade with respect to non-performing loans classification, thus also exempted from provisioning. Nevertheless, in December 2020, all banks were required to apply pre-COVID requirements, and the preliminary data signal a healthy loan portfolio, with the probability of a slight increase in non-performing loans (NPL) in the months to come. At the end of 2020, NPL stood at 2.63 percent whereas the ratio of provisions to NPL was 143.27 percent.

The authorities remain committed to implementing ongoing structural reforms as well as to design and implement new reforms. The authorities have expressed their interest to conduct a general review of the current tax policy and identify potential improvements in collaboration with Fund staff. On revenue administration, efforts will continue to improve performance, with a focus on digitalization, and shifting to a risk-based approach in auditing.

Over the past years, many different social schemes were introduced. The authorities are committed to reviewing the existing schemes, to ensure consistency, consider long-term implications of existing and future schemes, ensure fair treatment for all, and avoid an ad-hoc approach to addressing the needs of individual groups.

While progress has been made with the implementation of e-procurement, efforts will focus on improving operational aspects of this reform, including transparency in the procurement of public goods. Given the decision of the Constitutional court to repeal the law on salaries for public sector employees, the priority is to make the compensation policy of public servants more transparent and fair, in line with staff recommendations.

To improve corporate governance of Publicly Owned Enterprises (POE), which currently pose large fiscal risks to the government, the authorities have agreed with staff to establish and develop performance and quarterly risk assessments for high risk POEs and strengthen the institutional arrangement for POE oversight.

Possible request for a program

We wish to note that in December 2020 technical discussions for a UCT program were successfully concluded with staff, but given political developments, discussions were put on hold, until new institutions are created. In this context, it is likely that following the general elections in mid-February, the new government will approach the Fund to negotiate a possible program. 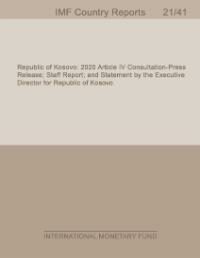