Request for Disbursement under the Rapid Credit Facility-Press Release; Staff Report; and Statement by the Executive Director for Papua New Guinea

Request for Disbursement under the Rapid Credit Facility-Press Release; Staff Report; and Statement by the Executive Director for Papua New Guinea

On behalf of our Papua New Guinea (PNG) authorities, we thank staff, management and the Executive Board for their continued support to PNG, especially during these challenging times.

Seeking support from the Fund, both through the SMP and now through emergency financing, is a significant step for the government. The authorities are grateful to have re-established positive engagement with the Fund and remain firmly committed to their reform efforts and are keen to establish a positive track record of policy implementation with the Fund.

PNG’s health system is fragile. The fast-growing population of more than eight million mainly live outside urban centers, often in remote and rugged country that is difficult to access. PNG has only 500 doctors, less than 4,000 nurses, and around 5,000 beds in hospitals and health centers, and only 14 ventilators. Local testing kit stocks are low and many tests are sent to Australia. A COVID-19 outbreak could be catastrophic – especially in the outer provinces.

For this reason, the PNG authorities acted swiftly to take early action to prepare for the health risks and to impose containment measures to protect the PNG people. So far PNG has only had a handful of confirmed COVID-19 cases and no fatalities.

The government imposed necessary containment measures, declaring a State of Emergency on 24 March, which restricted movements and gatherings, closed schools, enforced home quarantine for everyone except essential workers and closed international borders. From early May, PNG has started to gradually ease restrictions – opening up the borders to allow PNG nationals to return home, slightly easing intra-province travel and resuming some business operations – while continuing to encourage social distancing, banning social gatherings and continuing to encourage non-essential workers to stay at home.

The impact of the COVID-19 pandemic and the necessary containment measures imposed by the PNG government will have a significant negative effect on domestic economic activity and growth. The authorities are forecasting the PNG economy to fall into recession in 2020, driven by the fall in global growth and the impact on commodity prices, as well as the impacts of containment measures on retail trade and other parts of the PNG economy.

Despite a current account surplus, PNG’s non-resource sector continues to face a shortage of foreign exchange, as the surplus is almost entirely offset by financial outflows associated with resource sector investments. As a result of the pandemic and lower commodity prices, export earnings are expected to fall by 13 percent (a fall of over K5 billion), making foreign exchange shortages even more acute. Lower export earnings will have large negative flow on effects for government revenue from mining, but also lower incomes for rural households.

The economic slowdown and individuals losing employment will lower personal income tax, company tax (including mineral petroleum tax) and GST collections. Overall, revenues are expected to fall by around K2,200 million representing a loss of nearly one-fifth of expected domestic revenues in 2020.v

Leading into the pandemic, PNG’s starting point was a budget deficit of K4,631 million (around 5 percent of GDP) – which the authorities now expect to worsen given the impacts of COVID-19 and the significant reductions in tax revenues and slowdown in government business operations. The authorities intend to introduce a supplementary budget that will incorporate the effects of COVID-19 on government revenue and expenditure and the necessary financing requirements.

The PNG authorities took early actions to prepare the health system, through increased funding for testing and quarantine facilities (K45 million), as well as clearing backlogs of unpaid medical bills. The government’s swift actions, together with containment measures, were an attempt to prevent PNG’s limited health care infrastructure being overwhelmed by community transmission cases.

The authorities have continued to announce a series of policy responses to the crisis, including a K5.7 billion (around 6 percent of GDP) stimulus package. Given the already large debt burden, the authorities limited direct fiscal spending in the stimulus package to K600 million, bringing total COVID related spending to K645 million (around 0.8 percent of GDP), and have chosen to use primarily monetary, financial and banking policies to cushion the negative effects on the economy. Importantly, the authorities are seeking to maintain overall government spending at the 2020 Budget level so are looking in the first instance to redirect spending to support the health system, security and the economy.

Households and businesses will be afforded loan repayment holidays, with payments of obligations in the second half of the year, and for those individuals who have lost employment, the authorities are also allowing enhanced early access to superannuation savings.

The Bank of Papua New Guinea has taken a number of steps to support liquidity and credit in the economy, including by cutting the policy rate from 5 percent to 3 percent; reducing the cash reserve requirement from 10 percent to 7 percent; and initiating purchases of government bonds over the next three months.

To demonstrate their commitment to the reform efforts, two benchmarks under the SMP have been met as prior actions to seeking emergency financing. The authorities have set and approved explicit objectives and milestones for the Internal Revenue Commission to be achieved in 2020 through the Medium-Term Revenue Strategy Steering Committee. The authorities have also been regularly sharing information between Treasury and the Bank of Papua New Guinea to allow for effective liquidity management. This includes sharing projections for spending and debt-service payments, as well as projected revenues, debt issuance, donor grants and external loan disbursements.

The authorities are posting details of all COVID-related government spending on the National Procurement Commission website, and weekly reports are provided to the Budget Management Committee. The authorities have also committed to complete an independent audit within a year of the end of the State of Emergency and a consolidated procurement report will be provided to the National Executive Council within three months of the end of the State of Emergency. The Bank of Papua New Guinea has also committed to undergo a safeguards assessment, to provide the Fund with the most recent central bank audit reports, and to facilitate the bank’s external auditors to discuss these issues further with staff.

The PNG Treasurer and Health Minister recently reaffirmed their commitment to managing COVID-19 related funds transparently and appropriately, strengthening cooperation between their agencies and agreeing that Treasury is to withhold funding from implementing agencies if they fail to provide the appropriate acquittals.

The authorities are continuing to actively seek additional financing from multilateral and bilateral development partners and Fund support will play a catalytic role. In this regard, the World Bank is providing $US20 million in medical supplies assistance and the Asian Development Bank is providing $US195 million to support the delivery of accessible, affordable, and high-quality health services in PNG. Other donors are also adjusting their programs to respond to COVID-19. The authorities have also applied to the Paris Club for debt relief on eligible official bilateral debt, under the G20 Debt Service Suspension Initiative.

The authorities are thankful to the Fund for their advice and support of their economic reform program through the SMP, as well as ongoing technical assistance. The authorities look forward to further constructive engagement in the future which will help PNG deliver on its reform objectives and build a track record of policy implementation. 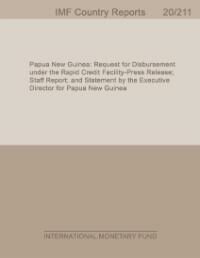