Request for Purchase Under the Rapid Financing Instrument-Press Release; Staff Report; and Statement by the Executive Director for Mongolia

Request for Purchase Under the Rapid Financing Instrument-Press Release; Staff Report; and Statement by the Executive Director for Mongolia

Our Mongolian authorities wish to convey their appreciation for the candid and constructive discussions with Fund staff. They are especially grateful to the Fund for the financial and policy support provided during the Extended Fund Facility (EFF) arrangement, which expired at the end of May.

Prior to the outbreak of COVID-19, macroeconomic policies, including strict fiscal discipline, and structural reforms under the EFF program significantly strengthened the economy: public debt was firmly on a downward path and the foreign reserves nearly tripled since the beginning of the program. Unfortunately, the pandemic has impacted the economy severely and the challenge now is to continue to reduce the spread of the virus, while supporting economic activity and preserving macroeconomic stability.

Mongolia has long and cold winters and a typical flu season lasts for a long period of time. The potential for a domestic outbreak of the pandemic would place extended pressure on health facilities and resources. Consequently, the authorities acted early and took strong containment measures to address concerns related to the outbreak and limit the spread of the disease. Preventive and containment measures were imposed in late January, including by cancelling public events and closing schools. By early February the authorities had closed the border to China for all passengers and mineral exports. As of June 1, 2020, Mongolia had 185 confirmed cases of COVID-19, with the majority of these cases being imported from overseas and detected from incoming travelers during their compulsory quarantined period. With only a few domestic cases, Mongolia thus far has successfully avoided a domestic outbreak.

Economic growth had started to slow in 2019 and the global pandemic and confinement measures are further weighing on many sectors of the Mongolian economy. The economy is closely tied to China and the slowdown in China will have a significant impact on Mongolia, especially in the mining sector. The global economic recession, slump in commodities prices and slowdown in domestic economic activities due to containment measures are all negatively affecting Mongolia’s growth. The economy is expected to contract by 1 percent in 2020, 6 percentage points lower than the pre-COVID projection. Exports fell dramatically in the first 5 months of the year due to border closures and consequently a virus-related decline in mining exports. Since March the authorities have been taking substantial steps to normalize exports, including the introduction of new standards tailored for border crossings during the pandemic and official discussion with regional and federal governments of China on revamping the flow of exports. As a result, recent export numbers are increasing. The authorities hope that exports could reach pre-COVID-19 levels in coming months. The authorities remain cautious about next year’s growth. They expect that the economy will rebound modestly in 2021, based on the recovery of the global economy and commodity prices. The outlook into the medium-term remains favorable given Mongolia’s significant mineral resource endowment.

In the face of the health and economic crises, the authorities announced a stimulus package to support affected households and businesses. The authorities reallocated spending from lower priority areas to health and social welfare measures, including temporary increases in child payments and other social transfers. To lessen the impact on employment and businesses, the authorities introduced various tax exemption measures and subsidy schemes for businesses. The authorities are ready to further adjust fiscal expenditures as necessary if there is a greater health or economic emergency. Fiscal revenues are projected to decline by 5.2 percent of GDP in 2020, largely reflecting lower commodity prices and volumes and weaker economic activity. The overall fiscal deficit is projected to reach -2.9 percent of GDP in 2020. During the past three years, the authorities were able to reduce the public debt by nearly 20 percent of GDP, but as a result of the negative economic impact of the COVID-19 the debt is projected to increase by nine percentage points of GDP in 2020.

The Bank of Mongolia has introduced a number of measures to reduce the negative impact of COVID-19, including cutting the policy rate by 100 basis points in both March and April, reducing the reserve requirements for commercial banks by 200 basis points, and introducing temporary postponement of mortgage and other loan payments for households. For the past three years, the reserve accumulation was one of the main priorities of the Central Bank and they largely succeeded by nearly tripling the gross international reserves. Unfortunately, due to a worsening balance of payments, around thirty percent of reserves could be lost this year. During this unprecedented time to support the economy and vulnerable groups, the Parliament of Mongolia enacted legislation which allows the Bank of Mongolia to undertake quasi fiscal activities. In discussions with staff, to reduce the balance of payment pressures the Bank of Mongolia has committed to restrict its quasi fiscal activities to less than 2 percent of GDP and discontinue these activities in the future.

Mongolia has benefited from many donors and organizations that have contributed funds and resources to the Mongolian government to fight the pandemic. Our Mongolian authorities recognise that it is a duty of the Government to spend these contributions responsibly and report to the public how they are spent. The authorities will publish quarterly reports on all COVID-19 expenditures from the budget, donor financing and private donations on the website of the Ministry of Finance (MOF) and commission an independent third-party audit of this spending within six months of disbursement and publish the results on the website of the MOF. The published results will include the full text of all related procurement contracts, including the names of the awarded companies and their beneficial owners, and an ex-post validation of delivery. In addition, the Bank of Mongolia commits to undergo an update safeguards assessment and will continue to provide IMF staff with access to its most recently completed audit reports and to authorize the Bank of Mongolia’s external auditors to hold discussions with IMF staff.

In October 2019, Mongolia was grey listed by FATF and a number of deficiencies were identified in Mongolia’s anti-money laundering and combating the financing of terrorism (AML/CFT) arrangements. Since then, the authorities have been undertaking measures to address these deficiencies and comply with FATF recommendations. Progress reports have been discussed at FATF working groups in January and May 2020.

Against this background, Mongolia is facing an urgent balance of payments need, which has triggered the authorities’ request for emergency financing in the amount of SDR 72.3 million. The Fund’s emergency assistance will help meet the urgent balance of payments financing needs stemming from the adverse impact of the ongoing shock on the economy as a result of COVID-19.

The authorities are continuing to actively seek additional financing from development partners and Fund support will play a catalytic role. In this regard, our Mongolian authorities are thankful to the World Bank, the Asian Development Bank, the European Union and other donors which provided loans and grants to fight the pandemic. They are also thankful to the People’s Bank of China for extending the swap arrangement with the Bank of Mongolia.

Looking ahead, as conditions permit, the authorities are committed to continue with structural reforms to alleviate vulnerabilities in the economy, including the reforms which Mongolia was not able to complete during the previous EFF program.

Mongolia will face a challenging period in the coming years. In addition to a highly uncertain global economic outlook, Mongolia faces a difficult amortization schedule from 2020–24. In light of this, our Mongolian authorities are continuing constructive discussions with the Fund about potential pathways forward. They remain grateful for their advice and support. 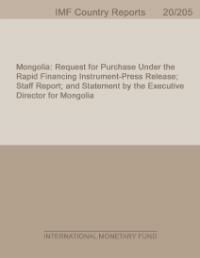