Papua New Guinea (PNG) comprises the eastern half of the island of New Guinea, the second largest island in the world. While larger than, for example, Germany, much of the country is steep and rugged mountains or swamp. PNG is one of the most culturally diverse countries in the world – over 800 different languages are spoken in the nation of over 8 million people. Most of the population lives in rural and remote areas, where access to government services and the formal monetized economy remains a challenge. Frequently occurring natural disasters and the effects of climate change also present challenges. There is an enclaved mining sector; the rest of the economy is based around agriculture, forestry and fisheries, and associated commerce and services. The country has a sound financial system and a stable political environment with a recent change in government in Parliament in May 2019. The new government remains committed to prudent macroeconomic management and is grateful for Fund support.

PNG is facing a number of substantial economic challenges and the authorities have embarked upon a comprehensive reform agenda to promote fiscal sustainability, foreign exchange reforms, state-owned enterprise (SOE) reform and improved governance. To support its reform agenda and program, the PNG government requested a SMP, which was approved by the Managing Director on February 20, 2020. The SMP will support PNG’s macroeconomic and stabilization efforts, including by assisting PNG to re-build credibility and confidence in its economic management. The SMP is a critical step to catalyze financial assistance from international donors and partners to fund the budget deficit and finance the country’s development priorities.

The SMP provides a broad macroeconomic framework within which PNG can pursue reforms and focuses on a number of structural benchmarks supporting the authorities reform priorities. The SMP includes measures to gradually reverse the build-up of public debt and to redirect public spending to more productive uses, bring expenditure under control while expanding government revenue, restore the convertibility of the currency and clear the backlog of foreign exchange in the economy, and structural reforms to support stronger, more sustainable and inclusive growth.

The authorities are committed to building a track record of implementing economic and social reforms, with the support of the Fund, to facilitate a return to sustained growth and macroeconomic stability. The authorities thank the Fund for agreeing to enter into a program with PNG. They take it as a vote of confidence in the economic reform program that has been put in place by the new government and look forward to working with the Fund.

The PNG authorities expect economic growth of 5.0 percent in 2019, similar to staff’s estimates, following the recovery from the earthquake in 2018. They also agree with the forecast for the growth to slow down in 2020, owing to lower production in the oil and gas sector. The authorities are encouraged that growth in the non-mineral sector is expected to be resilient. This is the sector the government is focused on developing as the majority of the population is engaged in it. Despite a large current account surplus, PNG’s non-resource sector continues to face a shortage of foreign exchange, as the surplus is almost entirely offset by financial outflows associated with resource sector investments.

Coronavirus is of course a major uncertainty facing the global community and especially countries such as PNG with weak health systems and close communal living. PNG is taking actions to prepare for the health risks, including through increased dedicated funding as well as clearing backlogs of unpaid medical bills. Broader economic actions are being prepared based on meetings of health and economic experts. These are likely to extend beyond usual fiscal and monetary responses and into areas such as encouraging more immediate planting of food crops and examining cultural practices such as funeral arrangements (’haus kraes’). International assistance in making the best preparations possible would be welcome.

The authorities remain committed to reestablishing fiscal consolidation. A ‘due diligence’ exercise was undertaken in September 2019 which identified a fiscal situation considerably worse than previously stated. The budget deficit and debt-to-GDP ratios increased as a result of lower-than-budgeted revenue in 2019 and adoption of some international reporting standards, while expenditure increased, due in part to funding to the priority areas of education, health and law and order, and payment of arrears. The authorities introduced a Supplementary Budget in October 2019 with cuts to both capital and operational expenditure, including the provincial and district grants, to help restore fiscal consolidation. There was also some re-appropriation of expenditure driven by wage cost over-runs. The debt-to-GDP ratio is projected to be above 40 percent, higher than the range of 30.0 to 35.0 percent specified in the Fiscal Responsibility Act (FRA). The FRA was amended as part of the 2019 Supplementary Budget process with the upper limit moved to 45.0 percent, which will be reduced back to 35.0 percent within 10 years.

The 2020 Budget was presented in November 2019 with the aim of continuing the fiscal consolidation efforts through expenditure efficiency, sustainable investments and broadening the revenue base, amongst other measures.

Revenue raising remains a challenge and several measures were introduced in the 2020 Budget. These measures include refinements to some tax administration processes, increases in a number of customs and excise duties, a proposed small business tax and higher tariffs on tobacco and alcohol. The recent appointment of a permanent Tax Commissioner should assist with the implementation of an updated medium-term revenue strategy, supported by technical advice from the Fund.

On the expenditure side, the authorities have taken measures to reduce non-essential expenditure, improve accountability and increase expenditure in rural areas. In the 2020 Budget, wages and goods and services expenditure as a proportion of non-resource GDP were reduced. Over the next three years, the authorities are also allowing for the payment of arrears for wages and salaries from industrial agreement with civil servants, pension exit payments and various contractual commitments that were incurred over the years. Better control of operational expenditure is expected under a new expenditure rule which focuses attention on capital spending instead of the operating budget.

The 2020 Budget’s financing also aims to repay part of the government’s arrears. This remains a challenge with the authorities focused on seeking cheaper sources of financing. Apart from domestic financing, there have been negotiations with the Australian Government for possible budget support as well as discussions with the ADB and World Bank. Part of this strategy includes the SMP with the Fund to help build confidence and credibility in the country’s economic management and provide a catalyst for international donor support.

The Bank of Papua New Guinea (BPNG) eased its monetary policy stance in 2019, reducing its policy rate from 6.25 percent to 5.0 percent, given low inflation, the relative stability of the kina exchange rate and weak global economic growth. The easing stance was to support lending by banks to the private sector. There were refinements to the monetary policy operations of BPNG to attempt to improve the transmission of monetary policy and liquidity management. These included securitizing borrowings under the Repurchase Agreement facility for government securities and Central Bank Bills. BPNG is also in the process of implementing a financial consumer protection framework that would address consumer concerns on financial services.

The authorities agree with the need to undertake measures to help eliminate the unfilled orders for FX and ensure exchange rate convertibility and are undertaking a review with an independent consultant examining how transitions from current arrangements can maximize benefits and minimize adjustment costs. The authorities consider that a gradual approach is needed given uncertainties over the size of the backlog as well as the appropriate level of the exchange rate. Efforts would also be made to strengthen liquidity management and effective monetary policy operations. The authorities will request technical assistance from the Fund and neighboring central banks to assist in these efforts.

PNG has a sound financial system dominated by commercial banks that are well-capitalized and profitable, with low non-performing loan ratios. BPNG continued to enhance the country’s National Payment System (NPS). In 2019, as part of the National Switch project, the Retail Electronic Payment systems (REPS) was rolled-out, enabling second-tier financial institutions such as microfinance companies, micro-banks, savings and loan societies and other smaller financial institutions to participate in the NPS. It connects the providers of electronic card and mobile phone payment services in PNG. REPS, together with the Kina Automated Transfer System for high value transactions by the commercial banks and BPNG, completes the modernization process of an efficient, secure and convenient payment system.

Reforms are needed to assist with the authorities’ focus on developing the non-renewable resources sector. To this end, the authorities remain committed to establishing a sovereign wealth fund to invest proceeds from the non-renewable resources sector. The authorities prefer that their involvement in future resource projects should be tailored towards obtaining better returns to PNG in the early stages of a projects’ life, rather than towards the end, including better tax returns based on production, and greater local content and employment opportunities. Several major resource projects are in the pipeline, including another LNG project, the Wafi-Golpu gold project, and expansion of the PNG LNG project, for which negotiations are continuing.

Outside the resources sector, the authorities’ key reforms include improving the telecommunications and transport infrastructure, promoting labor mobility, supporting student loans for higher education, and improving efficiency and productivity in the public sector. The authorities plan to undertake SOE reforms in 2020 through enhancing institutional capacity and improving management with better returns to the State.

The authorities remain committed to addressing governance and anti-corruption issues. Progress has been made in enhancing the AML/CFT framework with BPNG’s Financial Analysis and Supervision Unit (FASU) undergoing training. FASU was admitted as a member of the Egmont Group (of Financial Intelligence Units) in July 2019 while the country’s next mutual evaluation is scheduled for 2021. However, training is also needed for magistrates and judges who are unfamiliar with the laws dealing with AML/CFT and other financial crimes. The Parliamentary Public Accounts Committee has held widely publicized hearings into the procurement of health contracts for medicinal supplies. Legislation on an Independent Commission Against Corruption was tabled in Parliament in February 2020 and was unanimously supported to go through to the next step of the parliamentary process. A Whistleblower Act 2020 was also passed by Parliament in February. Adequate resourcing and training of staff in the National Procurement Commission is also planned for 2020. 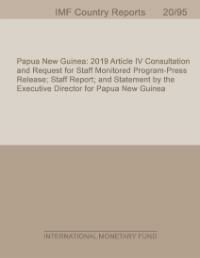