Uruguay enjoys favorable social outcomes and its labor indicators are broadly comparable to other Latin American countries, but its youth unemployment is one of the highest in the world. As a first step in understanding this duality, we employ synthetic panels from repeated household surveys for LA6 countries from 1990–2018 to investigate the determinants of the youth-to-adult unemployment gap. We find that in Uruguay most of the gap cannot be explained by standard variables, which leaves the possibility that other uncontrolled factors could be responsible for this dualism. Further analysis is warranted using microlevel data and controlling for labor market institutional characteristics.

A. Characteristics of Labor Markets

1. Uruguay enjoys one of the highest living standards in Latin America, also reflecting favorable labor conditions. Following the 2002 crisis, the country had a remarkable recovery in its social and economic indicators. It ranks quite favorably among its regional counterparts, with relatively low levels of poverty and inequality, and substantial social protection. A high proportion of workers contribute to social security (in fact, informal employment is the lowest in the region) and most old-age persons receive a pension. Workers have a relatively short workweek (39 hours), receive wages with adequate purchasing power and have access to unemployment insurance after contributing for a relatively short period.

2. Concurrent with the economic upswing, the government implemented a labor reform. In 2005, the newly elected government reinstated the wage councils (which had been suspended since 1992).2 The reform, more than tripled the share of workers protected by collective bargaining (from 28 percent in 2000 to over 97 percent in 2005) and strengthened the regulations on wage negotiations (Mazzuchi, 2009). As a result, Uruguay now has the highest coverage of collective bargaining in the region with levels comparable to OECD countries. Although, evidence on collective bargaining coverage in Latin America suggests they may create “insider-outsider” problems for workers not formally employed (Kugler, 2019). In [2014], the government introduced revised guidelines for the sixth round of the wage bargaining councils, incorporating productivity considerations and delinking wages from past inflation.

3. Labor market conditions have been deteriorating since 2014. Labor markets flourished during a remarkable decade of vigorous growth between 2004–14 (averaging 5.3 percent). During that period, employment and labor force participation rose by 10 and 6 percentage points respectively, and real wage increases averaged 4.1 percent per year. However, in tandem with the decline in growth (averaging 1.6 since 2015), labor market indicators have gradually deteriorated, particularly for the most vulnerable. Employment and labor force participation declined by 2.5 and 1.8 percentage points respectively, while annual real wages increases slowed to 1.6 percent since 2014.

4. Executive opinion surveys signal perceptions of low flexibility and elevated labor costs in certain areas. Data from the 2018 Global Competitiveness Report (from the World Economic Forum) suggest that employment practices are perceived to be less flexible, that taxes and contributions add to labor costs, and that attracting and retaining talent are somewhat difficult. Furthermore, labor costs (in addition to real wages and contributions) reflect high premium for overtime work, high number of paid leave days, and high severance payments. Finally, fixed-term contracts tend to be for relatively short duration.

5. Labor indicators are comparable to peers, but youth unemployment is one of the highest in the world. Despite the recent worsening, Uruguay’s unemployment rate (about 9 percent) remains comparable to regional peers and other emerging economies. However, youth unemployment (about 27 percent for those aged 16–24, as defined by the ILO) has severely deteriorated and is three times higher than the headline number. In fact, Uruguay is in the 90th percentile of the global distributions of both the youth/adult ratio and youth unemployment.3

6. Young Uruguayans face more vulnerable employment conditions relative to those in other Latin American countries. Young workers across the region mostly occupy temporary, low-quality and unskilled jobs, such as machine operators in agriculture or sales and service representatives in the hotels and restaurants sector. However, the prevalence of these jobs among youths is especially high in Uruguay and Mexico. Notably, nearly 50 percent of youths in Uruguay are hired on temporary/seasonal contracts. Moreover, their contracts are largely informal and concentrated in small and medium-sized firms, which commonly lack employee benefits.4 Since small and medium firms have a higher failure rates (as they are less likely to overcome a negative shock), they experience higher job losses and labor turnover relative to larger firms (Edmiston, 2007).

7. Youth unemployment appears highly sensitive to economic conditions, particularly during downturns. Extending (Ball, Leigh, & Lougani, 2017) Okun’s law estimates, we find that the sensitivity of unemployment to the business cycle declines with age and is especially elevated for the young. For example, the left figure shows that in Uruguay the pseudo-elasticity of unemployment to GDP growth is about -0.6 for people aged 18–21 and only -0.2 for persons over 30. This occurs because young Uruguayans tend to work in cyclically sensitive sectors and in small firms, which makes their employment less stable. We then analyzed if the sensitivity differs in expansions or downturns. We still find that the sensitivity falls with age but interestingly, the figure on the right shows that in Uruguay the sensitivity is higher during downturns. This could signal the presence of downward wage rigidity, where firms find it more difficult to cut wages than increase them, and thus they mostly reduce employment in downturns and instead increase wages in expansions (Aiyar & Voigts, 2019).

8. Job losses have been more pronounced in sectors with a high proportion of young workers. For instance, youth employment is mostly concentrated in commerce, hotels and restaurants and social services, but finance, agriculture, manufacturing and construction are also important. Whereas notably, agriculture, manufacturing and construction sectors have shed between 5 to 10 percent of workers since 2015. It should be noted however, that differentiated labor losses across sectors is not only the result of cyclical conditions but may also reflect technological shifts (as in agriculture) or competitiveness issues (as in manufacturing).

9. Even well-educated young experience high unemployment rates. In fact, the unemployment rate of the highly educated young is more than three times higher than the rate for adults with little education. This implies that for the young, a formal education is not enough to secure a job in Uruguay and thus there might be a role for further vocational training efforts.5

10. We estimate a reduced-form unemployment equation to investigate the determinants of high youth unemployment in Latin America.6 We construct a synthetic panel (Deaton, 1985) for LA6 countries from repeated household surveys between 1990–2018. The dataset contains over 900 observations per country organized into 56 cohorts defined by age, gender and educational attainment.7 The determinants of unemployment are analyzed with equation (1) using a random effects estimator:

where uct is the unemployment rate in cohort c in time t, Yt is the log of real GDP in time t, agec refers to the age of cohort c, Xct is a vector of cohort-specific effects such as marital status, education, region, gender and εct is a zero-mean error.

11. The effect of age on unemployment is heterogenous across countries. The unemployment rate decreases progressively with age (except in Mexico), with the largest decline occurring for prime-aged adults (30–54). However, the age effects are larger in Uruguay. In Uruguay, education has a significant impact on the aggregate unemployment rate, particularly at higher levels of education. Relative to the average cohort (with primary education) and conditional on other demographic factors, individuals with some tertiary and graduate level education have lower unemployment rates by 5 and 8 percentage points, respectively. Interestingly, when we control for education and other demographic characteristics, the effect of GDP is no longer significant or has the wrong sign.8

12. The Uruguayan labor market has special characteristics that cannot be explained with standard variables. About 40 percent of Uruguayan unemployment cannot be explained with the controls from equation (1).9 For example, the unemployment of persons age 15–17 is 37 percent, which is 15 percentage points higher than would be expected if the persons from this age group lived in the average LA5 country. The unexplained portion falls with age and thus a large fraction of the youth-to-adult gap in Uruguay remains unexplained. For example, the unemployment rate of persons aged 15–17 is 30 percentage points higher than for those older than 25, of which 17 percentage points can be attributed to the difference in their characteristics and 13 percentage points remain unexplained (the unexplained portion falls to 9 and 6 percentage points for those aged 18–21 and 22–24, respectively). This opens the possibility that other factors, including labor market institutions, might be at play. Ideally, the statistical significance and robustness of this possibility should be analyzed by adding various labor-market indicators as covariates to the regression. However, due to data limitations (limited data points), this association cannot be formally tested.

In fact, Brazil, Italy, Spain and South Africa have higher youth unemployment than Uruguay but this is partly explained by a higher overall unemployment. Whereas in Italy, Portugal, Argentina, and Uruguay youth unemployment is high although the headline number is relatively low.

Youths are also much less likely to work for the government where employee benefits are usually higher relative to private firms. This further limits their opportunity to receive employment protection.

As far we know, this is the first paper to examine the reasons for dual labor market conditions between the young and adults. Previous related studies have employed difference-in-difference techniques to determine labor reallocation impacts or worker turnover from institutional reforms in European countries (such as Hijzen, et al. 2017; Bassanini and Garnero, 2013; and Centeno and Novo, 2012).

This might imply that age is highly correlated with other characteristics which are not controlled in the single-equation estimates of Okun’s Law. This result remains if we replace the GDP growth with the output gap (as in the Okun law estimates).

The explained and unexplained portions are estimated using a Oaxaca-Blinder decomposition, which breaks unemployment differentials per age group between Uruguay and a pooled sample of LA5 countries into differences in endowments and returns. The latter is often interpreted as a measure of labor market discrimination (Jann, 2008). Thus, the explained portion is the unemployment rate that would be expected given Uruguayan endowments per age group if the returns to those characteristics were the same as in the average LA5 country. 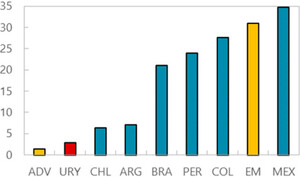 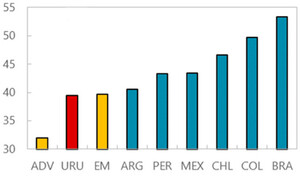 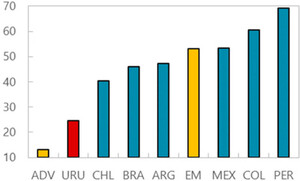 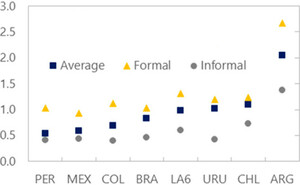 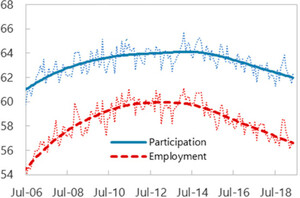 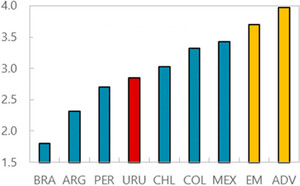 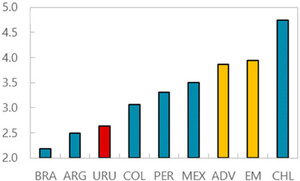 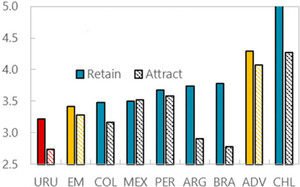 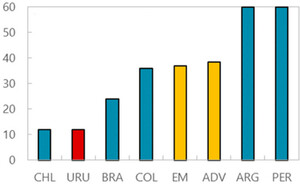 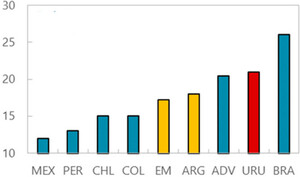 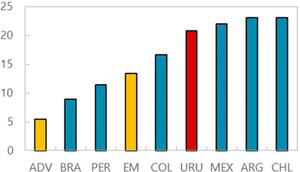 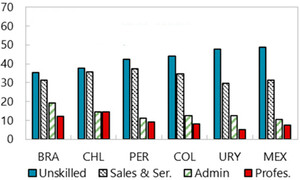 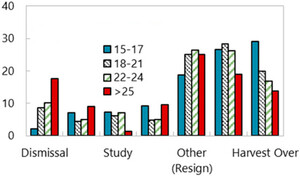 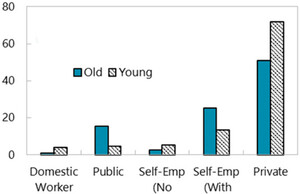 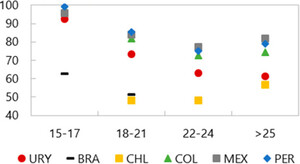 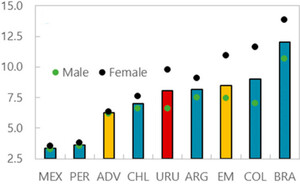 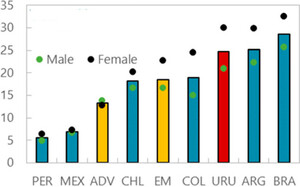 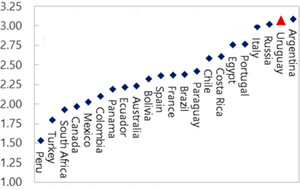 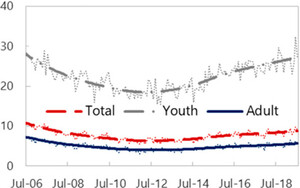 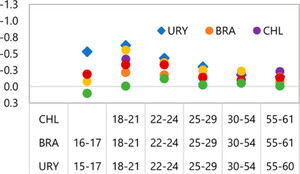 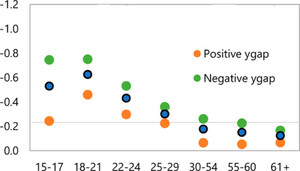 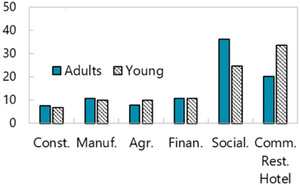 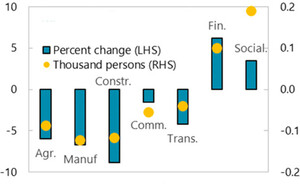 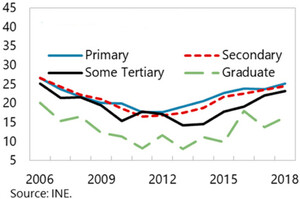 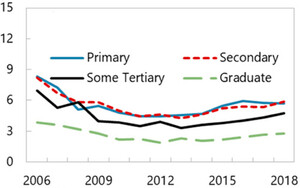 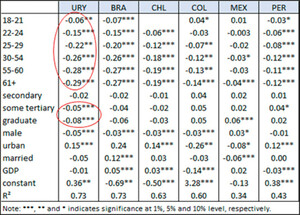 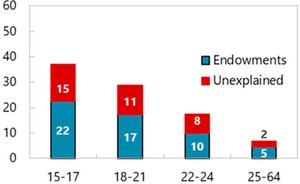