Japan’s population is projected to decline by more than 25 percent in the next 40 years, if the current low fertility rate persists. This overwhelming demographic challenge ahead of Japan leads to consideration as to whether there are policies the authorities can implement to affect the fertility rate. This chapter takes stock of recent developments with respect to Japan’s fertility rate, and argues that a combination of policies could raise the fertility rate if implemented in a coordinated and sustained manner.

1. Japan’s population is projected to decline by more than 25 percent in the next 40 years, if the current low fertility rate persists. Japan’s total fertility rate (sum of the age-specific birth rates of women aged 15 to 49) stood at 1.4 children per woman in 2018, which is well below the population replacement level of 2.1.2 In addition, a large gap remains between the actual fertility rate and the “desired” rate of 1.8—the latter being the rate expected if people had their desired number of children. This gap raises the question as to whether public policies can help increase Japan’s fertility rate by removing potential obstacles. A higher fertility rate could have positive impacts on aggregate GDP over the long-run, by increasing the size of the labor force and helping stabilize public debt (as a share of GDP). At the same time, this policy objective needs to be mutually consistent and reinforcing with other public policy objectives. For example, the IMF has stressed the need to promote female labor force participation—see IMF (2018), Colacelli and Fernandez-Corugedo (2018). However, if not accompanied by sufficient support for working couples with small children, higher FLFP could potentially increase the opportunity cost of giving birth and thereby lower the fertility rate. The Japanese government has stepped up its support for households with children, with notable measures being increasing the availability of childcare facilities and making preschool and childcare free. This chapter takes stock of recent developments in Japan’s fertility rate, and discusses whether public policy can help increase the fertility rate.

B. Overview of Japan’s Fertility Rate

2. Japan’s fertility rate has improved in recent years but remains low at 1.4 children per woman. After the second baby boom in the early 1970s, Japan’s fertility rate declined until it bottomed out at 1.26 in 2005 (see top-left chart of Figure 1). This declining trend of fertility mirrors the trend increase in the percentage of late-married and non-married (see the bottom two charts of Figure 1). The marriage rate (the number of marriages per population of 1,000 persons) in Japan halved from around 10 in the early 1970s to around 5 in 2015. In more recent years, Japan’s fertility rate has marginally recovered, but remains low at around 1.4 children per woman—well below the population replacement rate of 2.1, and lower than all other G7 countries except Italy (see the top-right chart of Figure 1).

3. A gap exists between the actual and desired number of children per couple. According to a survey by the National Institute of Population and Social Security Research (the NIPSSR), an ideal number of children for a couple is 2.32 on average.3 However, those couples plan to have on average 2.01 children—the sum of the number of children already born (1.68) and the number of additional children the couple plans to have (0.33). On the other hand, while the unmarried rate of females aged 30–34 has risen to about 35 percent, 90 percent of unmarried females aged 18–34 intend to marry in the future. Based on the NIPSSR survey and other data, the government estimates the “desired” fertility rate of 1.84 that could be achieved through closing the gap between the actual and desired number of children, and removing obstacles to higher fertility rates.

4. The direct cost of childbearing seems to be the most important factor which prevents couples from attaining their ideal number of children. The NIPSSR 2015 survey summarizes the reasons why couples do not have their ideal number of children. The top reason cited by 56 percent of couples is the cost of childbearing; this is followed by the reluctance to bear a child at an advanced age (40 percent).

5. The opportunity cost of childbearing also matters. During the period of Abenomics, Japan’s female labor force participation rates (FLFP) have substantially increased from 63 percent in 2012 to 71 percent in 2018 (for those aged 15 to 64), according to OECD Employment and Labour Market Statistics. A higher FLFP could increase household incomes and make the cost of childbearing affordable (i.e., the income effect). On the other hand, higher FLFP could increase the opportunity cost of having children as females typically need to leave their workplaces for a certain period of time (i.e., the substitution effect). In fact, according to the NIPSSR (2015) survey, about 15 percent of couples responded that their jobs/businesses are one of the main reasons for the gap between the actual and desired number of children, which can be seen as a measure of the opportunity cost of having children.

7. This section provides a simple empirical analysis to study the possible drivers of Japan’s fertility rate. D’Addio and Mira d’Ercole (2005) discussed the historical development of fertility rates across OECD countries and showed that, based on a static cross-section analysis, fertility rates are lower when the direct costs of childbearing are higher. Regarding the impact of increased FLFP, they calculated that the correlation between female employment rates and total fertility rates in OECD countries turned from negative to positive in the late 1980s. Using a dynamic panel data model, they observed that the fertility rate is higher when (i) female employment rates are higher, and/or (ii) the ratio of female to male wages is lower. In this section, an approach similar to D’Addio and Mira d’Ercole (2005) is applied to Japan’s prefecture-level panel data to study Japan specific features.5

9. The Pooled-Mean Group estimator is the preferred model. The simple pooled OLS regression model does not allow for prefecture-specific effects. A commonly-used alternative, the fixed effects estimator, takes account of prefecture-specific effects, but fails to deal with the issue of the endogeneity of explanatory variables with respect to the total fertility rate. In order to deal with the endogeneity issue, the PMG (Pooled Mean Group) estimator proposed by Pesaran et al. (1999) is used here, following the approach of D’Addio and Mira d’Ercole (2005). The PMG estimator distinguishes long-run and short-run dynamics. Coefficients for long-run effects are assumed to be identical across prefectures, while those for short-run effects are allowed to differ. The other model used in D’Addio and Mira d’Ercole (2005), a GMM (Generalized Method of Moments)-System estimator developed by Arellano and Bover (1995) and Blundell and Bond (1998), is a less preferred option here, because the post-estimation Sargan test rejected the null hypothesis that over-identifying restrictions are valid, indicating a potential misspecification (see Table 1). Therefore, the discussion hereafter is based on the PMG estimates, with a focus on the long-run dynamics, while turning to the GMM estimates as a complementary reference.

10. Every explanatory variable has a statistically-significant impact on the prefectural fertility rate in the long-run. Table 1 shows the results:

11. The Japanese government’s Work Style Reform, which has intensified since 2016, could have a positive impact on the fertility rate.7 Introduction of public policies to reduce the unwilling exclusion of female workers from the labor market following childbirth could raise the fertility rate over the long-term. It is of particular importance to nurture a working and social environment where female regular workers can retain regular-worker status after childbirth, if they wish to. Potential measures the authorities could undertake to achieve this goal include: (i) further increasing childcare availability; (ii) rewarding firms with high retention rates of female employees after childbirth; and (iii) eliminating disincentives to regular and full-time work embedded in the tax and social security systems (see IMF (2019)). The impact on the fertility rate could be reinforced by measures to alleviate the direct cost of childbearing, such as lowering education and childcare costs.

The total fertility rate in a specific year is defined as the total number of children that would be born to each woman if she were to live to the end of her child-bearing years and give birth to children in alignment with the prevailing age-specific fertility rates. This indicator is measured in children per woman. See OECD (2019).

As the National Census is a quinquennial survey, values for gap years are filled by linear interpolation.

Japan: Reasons Why Couples Do Not Have Their Ideal Number of Children 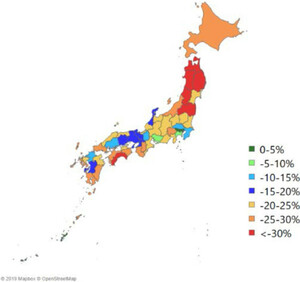 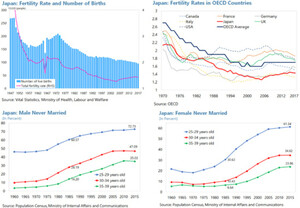 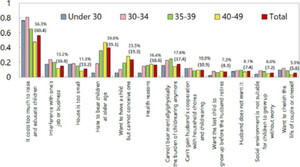 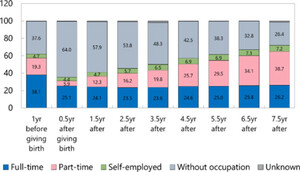