Is Automation the Answer to Japan’s Demographic Challenges?1

Japan’s demographic transition will pose grave challenges for fiscal sustainability under the current social security system. At the same time, Japan’s shrinking and aging population is expected to worsen inequality in terms of market income. Automation and artificial intelligence technology have been seen as a potential answer to the macroeconomic issues generated by population aging, though it is not clear to what extent the new technology will mitigate the impact of demographic change on growth and income distribution. Simulation results from a calibrated multi-sector general equilibrium overlapping generations model suggest that automation can potentially offset the impact of population aging on real output, but cannot fully eliminate fiscal pressures arising from demographic transition. Nonetheless, for an aging society such as Japan, automation may improve distributional outcomes.

1. Adverse demographic trends in Japan have serious implications for its long-term growth prospects and fiscal sustainability. Official projections anticipate that Japan’s population will decline by 25 percent in the next 40 years. A rapidly shrinking and aging population and labor force constitute severe demographic headwinds to future productivity and growth. IMF staff simulations estimate that under current policies, the level of Japan’s real GDP will decline by over 25 percent in about 40 years due to demographics relative to a projection for real GDP where productivity and population grow at their recent pace (Colacelli and Fernandez-Corugedo, 2018). Adverse demographic trends place significant pressures on fiscal sustainability, as age-related public expenditures rise while tax revenues shrink with the declining labor force (IMF 2018, Kitao, 2015 and McGrattan et al. 2018).

3. The Japanese government envisages automation and artificial intelligence (AI) technology as offsetting its declining population and labor force. The Japanese government’s 2014 “Japan Revitalization Strategy,” envisaged a “New Industrial Revolution Driven by Robots.” The Japanese government launched the ‘Society 5.0’ initiative in 2019, with the aim to better utilize and disseminate robots across Japan.2 The initiatives highlighted several sectors that will benefit from greater usage of robots and AI technology. These sectors include health care, transportation, infrastructure, and FinTech.

4. This chapter aims to quantitatively assess the macroeconomic and distributional implications of automation in Japan. Labor saving technologies—automation and AI technology—change the way production takes place and by so doing can potentially increase productivity levels in the economy. At the same time, these technologies can disrupt labor market dynamics and displace labor in certain productive sectors, while expanding labor demand in other sectors. As the impact of automation and AI technologies is expected to differ for different types of workers, the widespread adoption of these technologies might further increase market income inequality and can result in increased income polarization. A proper assessment and quantification of the macroeconomic and distributional outcomes requires a general equilibrium framework that can account for the direct and indirect effects that these new technologies have on labor demand, labor incomes, private investment and aggregate economic activity.

B. Framework of Analysis

5. The analysis is based on a multi-sector general equilibrium overlapping generations model developed for the quantitative analysis of the macroeconomic and distributional effects of aging.3 This model has a rich production structure that encompasses manufacturing, low tech-services and the high-tech services sector.4 We assume that goods in these sectors are produced using different combinations of factors (tangible and intangible capital, as well as low-, mid- and high-skill labor)—see text figures below. Households vary by generation and skill level, and face different levels of taxation and transfers. On the spending side, households receive age-dependent transfers—pension benefits as well as health and long-term care. On the other hand, financing instruments include time-varying progressive labor income taxation (including social security contributions), consumption or value-added tax (VAT), corporate income tax, and government debt. These instruments and related parameters are tailored to Japan’s data at the macro and micro level, building upon McGrattan et al. (2018). In addition, the model’s assumed demographic transition closely follows the Japanese authorities’ own projections to capture the dynamics of age-related costs. The analysis considers a baseline steady-state scenario that corresponds to the period 2000–11, before Japan’s population started to decline, which began in 2012. This period is used to calibrate the model to Japan.

6. The first scenario (labeled as ‘Aging’) considers a long-term scenario in which annual population growth is shrinking by 1 percent. Under this scenario, social security system (transfers, pensions and health expenditures), tax rates (except for VAT rates), and the public debt-to-GDP ratio are anchored at their 2019 levels; age-related fiscal costs of supporting the social security system are financed through permanent VAT rate increases. A comparison of this scenario with the baseline scenario permits an assessment of the macroeconomic and distributional impact of aging.

7. The second scenario (labeled as ‘Aging + Robots’) allows for the introduction of automation and technological change in addition to aging. This scenario has the same underlying assumptions about negative population growth, the social security and taxation system, and public debt-to-GDP ratio as the ‘aging’ scenario. In addition, we introduce a higher elasticity substitution of low- and mid-skilled labor by capital in manufacturing and the high-tech services sector. This allows some tasks that had to be previously undertaken using labor can now be done using capital. We also introduce a reduction in the relative price of capital to wages to represent the fact that with technological change, capital (robots) becomes more affordable. As the exact pace of technological progress in the future is unknown, we assume that this process will be such that in the next 40 years, Japan’s share of labor income in GDP will fall by the same amount it fell between 1980 and 2012 (approximately 5 percentage points) and that the relative price of capital goods (robots) to average wages will fall at an average of 0.5 percent per year. The latter corresponds to the average decline in the relative price of all private fixed assets to wages between 2000 and 2012 in the United States.

8. In the baseline scenario, the long-term

macroeconomic costs of Japan’s declining and shrinking population are substantial. Even if we assume that total factor productivity growth is not affected by a decline in population growth, the level of GDP will fall by 8 percent with respect to the levels observed between 2000 and 2010. Less workers and less demand due to an aging and shrinking population will lead to a decline in total output. On the other hand, fiscal spending will increase largely due to age-related spending. VAT rates (or consumption tax rates) will have to increase permanently by 10 percentage points to maintain the debt-to-GDP ratio at the level observed in 2019 (that is, at about 230 percent).

10. If technological change continues at its current speed, automation could offset the impact of population aging on per-capita GDP. Automation (“aging + robots” scenario) might raise per-capita GDP by 4 percentage points above the average level seen during the period 2000– 11 (see left panel of text chart below). However, automation will not suffice to eliminate fiscal pressures. Higher aggregate levels of age-related fiscal expenditures will still require an increase in VAT rates, though the necessary VAT rate increase is half that without automation, rising by 10 percentage points (Aging scenario) and by only 5 percentage points (Aging + Robots scenario).

11. In an aging society, automation could reduce market income inequality. While the direct impact of automation implies the replacement of workers with robots, the indirect effects of automation—between-industry shift effects and final demand effects—allow for an important increase in labor demand that pushes up wages for all workers (Autor and Salomons, 2018). In our analysis, automation leads to a reduction in market income inequality (see left panel in text chart below). This is due to the differentiated increase in wages by skill levels. With automation, the share of market income for the top 20 percent of the population increases, but the increase is smaller than in the aging-only scenario. The share of market income for middle segment declines with automation, but the decline is smaller than in the aging-only scenario (see right panel in text chart).

12. Through its impact in facilitating the financing of the social security system, automation can help reduce disposable income (and consumption) inequality. As automation improves market income and makes possible the financing of the social security system with a smaller increase in VAT tax rates (making the impact of such increases less regressive), automation improves the distribution of consumption, with the Gini index using disposable income falling by 2 percentage points (see left panel of text chart below).6 The share of consumption for the bottom 20 percent and middle-segment of the population increases in the aging scenario, but the increases are larger with automation (see right panel of text chart).

13. The extent to which automation can help mitigate the challenges brought by the demographic transition in Japan depends on whether or not technological change occurs at its current speed of progress and breadth of reach. Our analysis hinges critically on the assumptions made on the nature and speed of future technological progress. There is a great deal of uncertainty as to how this progress will unfold, but recent studies show that our assumption that technological progress will be as fast as past years may be an upper bound. Nordhaus (2015) discusses that in recent periods, technological change—measured by the rate of decline of capital prices to labor wage rate—does not seem to be accelerating and may even be slowing. In a similar fashion, IMF (2017) finds that the growth rate of cyclically-adjusted total factor productivity for advanced economies between 2008–14 is about half the rate of growth observed between 2003–07, and approximately one fifth the rate of growth observed between 1990 and 2002.

14. To reap the maximum benefits from automation to offset the adverse impact of a declining population, investment in technology, innovation and education will need to have a high rate of return. If the future growth rate of technological change is only one half that observed between 2000–12 (also half the assumed rate underlying our analysis), automation would not suffice to prevent the fall of per-capita GDP caused by the demographic transition in Japan. This suggests that measures that help ensure that technological innovation is successful will have a large economic dividend. Efforts should be made to encourage spending on research and development, and improve education levels, to help familiarize workers with new technologies and enhance their labor productivity.

15. At the same time, policies to address the distributional consequences of automation are important. One aspect not yet considered in this analysis, which deserves further attention, is the impact of automation on gender inequality and inequality across generations. Hamaguchi and Kondo (2018) estimate that female workers in Japan are exposed to higher risk of being replaced by ‘computerization’ than male workers. Similarly, elderly workers often enter the work force as part-time workers in sectors that require low-skills, and are thus more likely to be replaced by automation. Strong and effective social safety nets will be crucial to protect these workers, since disruptions of some traditional labor and social contracts due to automation are highly likely during Japan’s demographic transition.

The ‘Society 5.0’ initiatives are to create a society that address various social challenges that Japan faces by incorporating the innovations of the fourth industrial revolution into every industry and social life (https://www.japan.go.jp/abenomics/_userdata/abenomics/pdf/society_5.0.pdf).

For details on such a model tailored to Japan, see McGrattan et al. (2018) and Hong, Lizarazo Ruiz, Peralta-Alva and Yao (forthcoming).

The sectorial structure assumed for this model is similar to Lizarazo Ruiz et al. (2017).

Japan: Impact of Aging on GDP Level and VAT rate

Japan: Changes in the Share of Market Income by Income Group

Japan: Changes in the Share of Consumption by Income Group 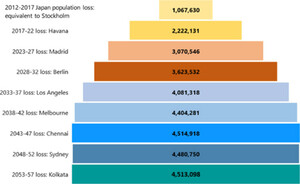 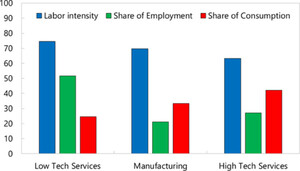 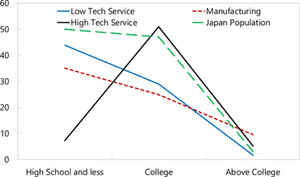 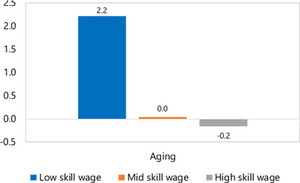 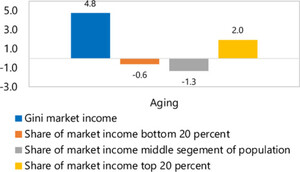 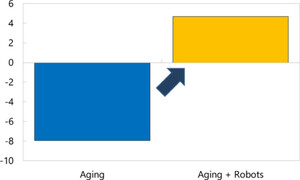 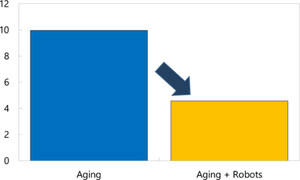 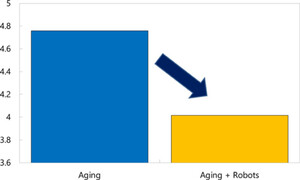 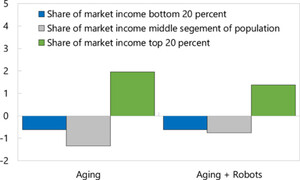 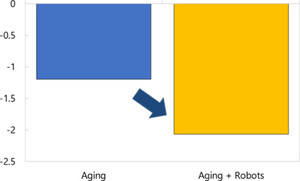 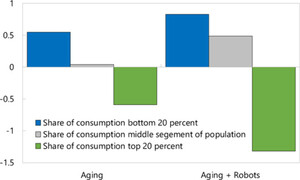