1. Inflation rates were volatile in 2018 and 2019. On a year-on-year basis, inflation rates rose from 2.9 percent at end-2017 to 6.7 percent in September 2018, then declined to 0.8 percent as of October 2019. Several factors, including changes in oil and rice prices, an increase in excise tax rates, monetary policy adjustments, and the changes in the cyclical positions of the economy, are widely cited as contributors to the volatile inflation dynamics.

2. A semi-structural model is used to decompose the inflation dynamics into the contributions of various exogenous shocks. These shocks can be broadly classified into several major categories: global oil and food prices, domestic pass-through of commodity prices, monetary policy, growth and inflation in the United States, shocks to aggregate demand, and other cost push shocks etc. The model is a version of the IMF’s “Forecasting and Policy Analysis System” (FPAS) based model. It has a standard core structure based on New Keynesian models, including: (1) Phillips curves to model prices; (2) a dynamic IS curve for the demand-side dynamics; (3) uncovered interest parity; and (4) a version of the Taylor rule. Expectations are forward-looking, consistent with the projections of the model itself. The technical details of the model are discussed in Guo and others (2019). Compared with econometric models, inflation expectations (which are a major component in the Phillips curve) are “rational” in our model: they are consistent with the future inflation path projected by the model itself (Box 1).

3. The purpose of the decomposition exercise is to better understand the underlying sources of the recent inflation dynamics and, thereby, contribute to the current debate about inflation prospects and the appropriate monetary policy stance.

B. Background—Broad Success in Reducing Inflation

5. Monetary operations have improved, which has enhanced the transmission of monetary policy and the functioning of the IT regime. Historically, volatile cross border capital flows and the lack of effective sterilization tools in the toolkit of the Bangko Sentral ng Pilipnas (BSP) used to create misalignments between the BSP’s policy rate and short-term market interest rates, dampening the transmission of monetary policy. This was especially obvious in 2016, when T-bill rates and interbank rates were substantially below the policy rates as a result of capital inflows.2 Since late 2017, the BSP has improved its liquidity management by using its Term Deposit Facility (TDF) to absorb excess liquidity. As a result, market rates have generally been anchored by policy rates, and the rise in policy rates in 2018 was transmitted to the long-term government bond yields and bank lending rates. All these changes will further improve the functioning of the IT framework.

7. Inflation rates rose sharply in the first three quarters of 2018. The CPI increased by 5.7 percent from end-2017 to September 2018. Much of the increase was observed in 2018:Q1 (after the hike in excise taxes in January 2018) and 2018:Q3. By components, food and energy price increases contributed the most to the rise in the headline CPI. In particular, the price of rice, representing 9.6 percent of the CPI basket, increased by 10.2 percent in the first three quarters of 2018. However, the contributions from core CPI items were also nonnegligible.

8. Inflation decreased in late 2018 and 2019. CPI inflation started to decelerate in late 2018 and eventually moved back into the target band (2–4 percent) in February 2019. Much of the deceleration was due to lower food and energy inflation. Core inflation, on the other hand, held up.

9. Policy responses during 2018–19. The Monetary Board meets eight times a year in the Philippines. After the February and March 2018 meetings, the Monetary Board decided to keep the policy rate unchanged despite the increasing inflation rates, noting the temporary factors that pushed up inflation rates and the relatively benign inflation forecasts at that time. After the May 2018 meeting, when inflation pressure became more broad-based, the Monetary Board started to increase the policy rate. Policy rates were increased by 175 basis points from May 2018 to November 2018. The higher policy rate was transmitted to financial markets. The average bank lending rates increased from 6.03 percent in May 2018 to 7.02 percent in December 2018 and 7.42 percent in March 2019. Credit growth to the private sector decelerated from 17.4 percent (y/y) in May 2018 to 9.9 percent (y/y) in March 2019, and 7.6 percent (y/y) in June 2019. Meanwhile, a few nonmonetary measures were also deployed or planned to help curb inflation, including increasing transfers to low-income families4 and relaxing the quota on rice imports. In 2019, when inflation rates were back in the target band and global economic conditions changed,5 discussions about cutting interest rates began. In May 2019, the BSP reduced the policy rate by 25 basis points to 4.5 percent. Subsequently, the policy rate was cut further to 4.25 percent and 4 percent, respectively, in August and September 2019.

D. Model Decomposition of the Inflation Dynamics During 2018–19

10. The rise in inflation during 2018 was mainly driven by the following factors:

11. The declining inflation pressure during 2018:Q4–2019Q3 was mainly driven by the following factors:8

12. The depreciation of peso contributed to rise in inflation moderately during 2018. In a counterfactual scenario with unchanged peso/U.S. dollar rate from end-2017 to 2019:Q2, year-on-year inflation rates could be about 0.6 percent lower at the peak (Figure 1).

13. In the baseline forecast of the model, inflation rates will temporarily fall below the target band before converging back to the 3 percent mid-point of the target band. This forecast reflects the baseline assumptions that global oil prices (Brent) will remain around US$65 per barrel in the next two years, food inflation will remain moderate at around 4 percent in 2020–2022,12 and that the policy rate will broadly follow the path implied by the model’s Taylor rule. The model projects that inflation rates (y/y) will decline below the target band in 2019:H2 because of the negative base effect from the sharp increases earlier in 2018: inflation had risen sharply in 2018:Q3 (7.5 percent q/q, annualized), especially food inflation (11.3 percent, q/q, annualized). However, starting in 2020, inflation is project to move back to the target band, as the base effect wanes.

14. Implications on monetary policy. Our model suggests that a broadly neutral monetary policy stance, with the possibility of some moderate loosening would be appropriate to achieve the inflation target within the usual one- to two-year horizon. In the baseline projections, interest rates would be around 3.5–4 percent in 2020.13 However, monetary policy stance should be data-dependent, as illustrated by the plausible alternative scenarios presented below.

Inflation Expectation in the Model versus Survey

China is the biggest trading partner of the Philippines. The PPI inflation in China had been negative from early 2012 to late 2016.

The rationale for using transfers to contain inflation was that higher transfers to low-income families would reduce the need to increase minimum wage, which is determined in annual bargaining. A smaller increase in the minimum wage will result in less pressure on labor cost and inflation. The effectiveness of this measure remains to be evaluated, as higher transfers can also put upward pressure on inflation through increasing workers’ purchasing power.

The main changes to global conditions include the trade tension and the prospective of monetary loosening in other countries, especially the United States.

Higher excise taxes were implemented in January 2018 on tobacco and beverages (as well as oil products). Its (positive) contributions to inflation are largely captured in the contributions of food prices (light green bars). However, the separation between the impact of excise taxes and other food-related factors is not available because it would require the specification of separate Phillips curves for tobacco and beverage items.

It should be noted that the decomposition excise is model based, hence to some extent the results would depend on the specifications of the model.

This probably reflects that transportation and electricity suppers could adopt the “wait-and-see” approach to delay the pass through of previous (up to 2018:Q3) oil price increase.

As shown in the “Real Interest Rate” figure, the real interest rate as of 2019:Q2 was higher than neutral level.

The projections in this section were produced based on the information as of November 2019.

Rice Price Index in the Philippines

Inflation—Scenario with Oil Prices at US$70

Inflation—Scenario with Slower growth in the U.S.

Inflation Expectation of Next Quarter 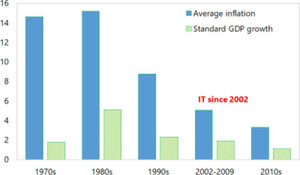 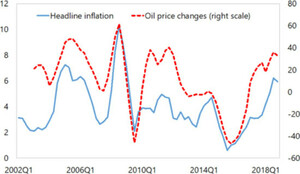 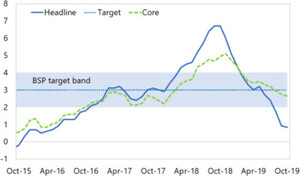 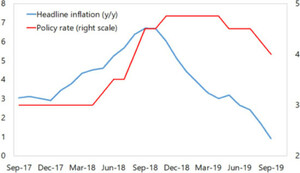 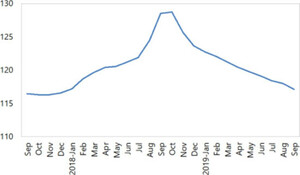 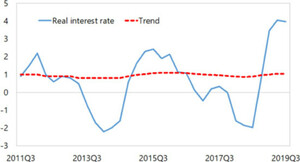 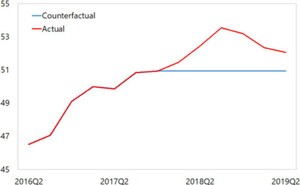 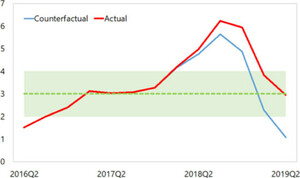 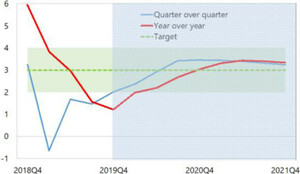 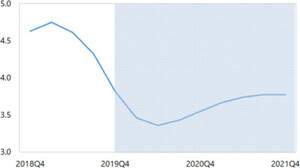 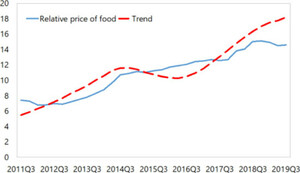 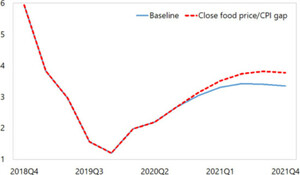 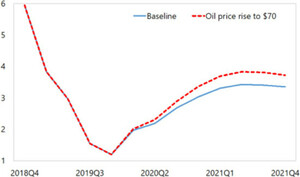 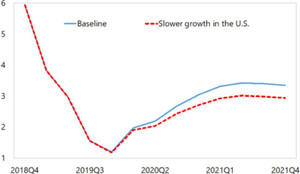 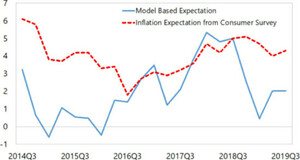