2019 Article IV Consultation-Press Release; Staff Report; and Statement by the Executive Director for the Republic of Nauru

2019 Article IV Consultation-Press Release; Staff Report; and Statement by the Executive Director for the Republic of Nauru

This statement contains information that has become available since the staff report was circulated to the Executive Board. This information does not alter the thrust of the staff appraisal.

1. A fourth supplementary budget for FY2019/20 was issued on 20 December 2019, to appropriate A$17.6 million (10 percent of GDP) in additional revenue. The revenue was mainly due to Australian Regional Processing Centre (RPC) for asylum seekers operations and included A$5.3 million in additional RPC hosting fees and a A$10.2 million payment for reimbursable RPC costs. The government also received a dividend paid by a telecom company (A$1.5 million). The supplementary budget is expected to have a negligible impact on GDP growth and other key variables as fiscal multipliers are low given Nauru’s openness.

2. The authorities are making progress on public financial management reforms. Following the Article IV discussions, the authorities have communicated that the financial statements for FY2016/17 have been submitted for audit and published on the official website. They are continuing efforts to improve bank reconciliation and have engaged a consultant to map the financial management information system (FMIS) to support GFS reporting. Other work is continuing to improve internal audit, establish a Finance and Audit Risk Committee, and recruit new staff to oversee reconciliation and SOE performance. 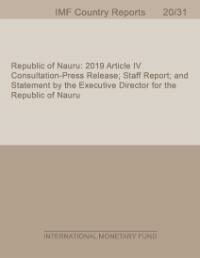