Fuel Price Subsidies in the Republic of Congo1

In 2005 the Congolese authorities introduced a new regulatory framework for fuel prices. It was based on a pricing formula that adjusts retail petroleum products prices to reflect import and domestic production costs, including margins and taxes, and avoid fiscal subsidies. However, this framework has not been applied. As a result, retail prices have been administratively set by ministerial decree, and have remained unchanged since 2008 below average cost recovery. The analysis shows that the refinery prices are structurally higher than international import prices by about 13–15 percent, due to production and administrative inefficiencies. As a result of the non-application of the pricing rule, and other structural inefficiencies, the government has incurred large budgetary transfers toward its refinery of over 2 percent of GDP per year, on average, during 2005–19.

1. Congo’s downstream oil sector is dominated by the state-owned national oil company SNPC and its oil refinery CORAF, which together provide about 75–80 percent of domestic demand for oil products.2 The State, however, allows the direct importation and distribution of refined petroleum products by 5 other private oil marketing companies (OMCs) to satisfy the growing demand of fuel products in the country. On the demand side, domestic consumption of refined products is mainly for diesel, representing 61 percent of domestic consumption) and gasoline accounting for 22 percent (Figure 1). Other petroleum products include aviation fuel, kerosene and LPG.

2. In 2005, the Congolese authorities introduced a regulatory framework to set domestic fuel prices. The framework is based on a one-price rule and a cost-plus principle. In particular, the authorities established one retail price for each petroleum product based on a formula that would adjust retail petroleum product prices to reflect import and domestic production costs (i.e. ex-refinery price), including margins and taxes, and therefore should avoid the occurrence of fiscal subsidies (Table 1).3

3. The main component of the retail price is the Entry Distribution Price (EDP), which is computed as a weighted average of import prices and ex-refinery prices. While the import prices are based on CIF prices plus other market-based fees, the ex-refinery price (PSR) is based on import parity prices with one-month lag and is augmented by a monopolistic markup or “economic adjustment” factor (Text Figure 1). This markup was administratively set initially in 2005 at 25 percent above the import parity price and then set to decline gradually over time, assuming CORAF gains efficiency and achieves refinery costs close to import parity prices.4 Text Figure 1 shows how the price structure works, including an example on how the formula would set the pump price for September 2019. Other features of the regulatory framework included: (i) the set-up in 2006 of a control authority (Agence de Regulation de l’Aval Petrolier (ARAP)) with oversight responsibilities on the sector and: (ii) a Technical Committee (CTSAPA), created in 2002 whose main responsibility was to evaluate on a monthly basis the price structure and propose adjustments in case the gap widens between expected and actual fuel product prices.

4. The authorities have not been implementing this price-based formal regulatory framework. In practice, regulated retail ‘pump’ prices have been set by ministerial decree at a level that on average has been below average costs and has remained unchanged since 2008.

5. Retail prices in Congo are lower than the average for the CEMAC region. While the average CEMAC region is influenced by the higher prices in the Central African Republic (the only non-oil producer), the price for diesel in Congo (which accounts for almost 2/3 of domestic consumption) is lower than in Cameroon, Gabon, or Chad (Text Figure 2). The only CEMAC country with generally lower prices than Congo is Equatorial Guinea. At the same time, the price for Gasoline is well-aligned with the price in other countries.

B. Trends and Fiscal Implications of the Domestic Fuel Subsidy

6. After the 2005 fuel price reform, the authorities increased retail prices only once (in 2008), despite a growing wedge between regulated and formula-based retail prices. At their peaks in 2008 and 2012–13, the price gaps for diesel and kerosene were estimated in excess of CFA 240 and CFA 300 per liter, respectively. The price gap for Gasoline was less pronounced around CFA 120 per liter. The total amount of the subsidy in 2012 is estimated to have increased to about CFAF 164 billion (USD 84 million), or 7.3 percent of non-oil GDP. During 2015–17, however, when international oil prices fell dramatically from previous peaks, and the country was hit by a deep economic recession, the authorities did not revise downwards the retail prices, and the price-gap became even negative for diesel and gasoline fuel products.

7. Failure to implement the 2005 fuel pricing formula has been associated with large fiscal transfers from the central government to CORAF. Since 2005, budgetary transfers from the central government to the state-owned oil refinery CORAF have exceeded the estimated subsidies. During 2005–19, the central government transferred over 6 percent of non-oil GDP per year, on average, to the state-owned oil refinery CORAF (Text Figure 3). The difference between the implicit subsidy and the transfer to CORAF is on average 50 percent of the subsidy since 2005. This suggests that half of these transfers are claimed by CORAF or SNPC to cover other operational or capital expenses.

8. The tax regime of the sector yields a relatively low net fiscal contribution, also due to hidden exemptions. There is an additional “hidden subsidy” in that the price charged by the importers includes a tax component that does not seem to be collected by the state. The tax component is the sum of import duties and VAT on the imported petroleum products and amounts to about 20 percent of the retail price. Over the period 2013–17, the state could have collected about 36 billion CFA per year for imputed taxes on imports of gasoline and diesel. This calculation excludes any VAT on the production of CORAF refined products.

9. The authorities need to implement the regulatory formula to limit fiscal exposure, and improve transparency. In addition, the pass-through of international prices to domestic prices is necessary to provide adequate price signals to consumers who currently perceive fuel prices as fixed and could assume that their immutability is a permanent entitlement. Under current conditions, with international prices close to the regulated retail price,5 the application of the price formula would not imply significant price increases. Moreover, previous Fund research has shown that the benefits of the subsidy regime are skewed in favor of higher income households, though poor households could also be adversely affected by price increases given the high share of energy in their total consumption.6

10. The reform strategy could include a smoothing mechanism to moderate short-term price changes and a system to compensate vulnerable groups. In particular, the reform could consider an automatic fuel pricing mechanism with a smoothing component, in line with the experience in a number of other countries.7 Liberalized retail prices would eliminate the potential re-emergence of the price gaps that have led to the subsidy in the past. At the same time, a more market-oriented system may also provide opportunities for broader reforms to promote sector efficiency.

11. Fiscal transfers to the state-owned refinery are very large and savings could be used for more efficient, poverty-focused programs. To put this in perspective, the estimated fiscal cost of fuel subsidies in 2019 (CFA 68 bn or 2.6 percent of non-oil GDP) amounted to almost four times the budget commitment for the social cash transfer program “Lisungi”. Efforts to reform energy subsidies should be well-designed and take into consideration the impact on vulnerable households, including from interventions in the form of conditional cash transfers and subsidies for public transportation.

12. The fact that the explicit budgetary allocation to CORAF is much larger than the implicit fuel subsidy is problematic. The current approach of covering CORAF’s inefficiencies through the economic adjustment factor or markup in the EDP should be gradually eliminated by making CORAF accountable for its performance and transform it into a more efficient company. The recent cap on budgetary transfers to CORAF for the 2019 budget imposed by Parliament is a step in the right direction, but a more comprehensive cost-cutting exercise needs to take place. This may take place following an audit of CORAF operations that is expected to take place over the coming months as the closure of the bidding process for the audit service was expected to be finalized at end November.

13. The downstream fuel sector in Congo faces some deep-rooted structural challenges that need to be tackled to make it more efficient and contain large fiscal subsidies. The analysis presented in this SIP suggests that there are four considerations that the government needs to bear in mind as they prepare their reform strategy.

14. The Pricing mechanism needs to become functional. The freeze of fuel prices since 2008 is problematic because it gives consumers the impression that fixed fuel prices are an entitlement. Best practice suggests that the new price system should be transparent, easily understood, and predictable for consumers and distributors alike. It should also include a smoothing component to prevent large swings in prices.

15. The government needs to develop a clear communication strategy. The strategy should explain how the regulatory framework works and include information on how the price mechanism operates so that consumers are able to understand future price fluctuations.

16. Mitigation measures to protect vulnerable groups should be a key element of any reform proposal, and should be in place before the automatic pricing mechanism is implemented. Consumers, especially the most vulnerable groups, should receive reassurances that the application of the formula will be accompanied by measures that mitigate the potential negative impact of price increases on their household income. The priority should be given to the expansion of a well-targeted social safety net for the most vulnerable groups. The development of the Lisungi cash transfer system offers a good option in this regard.

17. Reforming the CORAF refinery is key. The government needs to restructure the state-owned oil refinery CORAF to make fuel products competitive with the internationally imported petroleum products. This concern goes beyond the issue of applying the formula, given that he current formula allows CORAF to operate despite its inefficiency. Having a domestic refinery can be justified on strategic or economic grounds if it helps provide a more secure supply of energy and helps develop other positive externalities through various economic linkages with other sectors. However, CORAF has been receiving excessively large subsidies that are much higher than the level that would be needed to contain fuel prices. This practice needs to stop, and the government should evaluate the trade-offs of having a refinery that should only be preserved if it can have a minimum level of operational efficiency, which does not seem to be the case at present.

This SIP has been prepared by Alfredo Baldini and Alun Thomas. We thank Alex Segura-Ubiergo, Tonadio Nsongui (all AFR) for helpful comments and suggestions, and the Congolese authorities for their insightful suggestions during the seminar held at the Ministry of Finance in Brazzaville on November 4, 2019. Linnet Mbogo (AFR) provided excellent research assistance.

By looking at unpublished aggregate data on production and consumption, we estimate that SNPC imports and distributes about 5–10 percent of finished oil products and provide crude oil to CORAF.

These dispositions on the price structure were implemented with the Presidential decree 2005–699 issued on December 30, 2005.

As of 2019, the application of the formula for retail prices would imply a reduction in gasoline prices by 13 percent and an increase in diesel prices by about 14 percent.

See IMF 2015 for a summary of the distributional impact of fuel subsidies in Congolese households. The results are consistent with Alleyne (2013) which shows that subsidies in SSA countries have tended to provide some benefit to all segments of the population, though the benefit has been disproportionately larger for higher income households.

In the SSA region, Mozambique, Togo and Zambia have a recurrent smoothing price mechanism that allow the Energy Regulatory Agency to pass-through prices within some pre-set margins.

Description of the Fuel Price Structure1 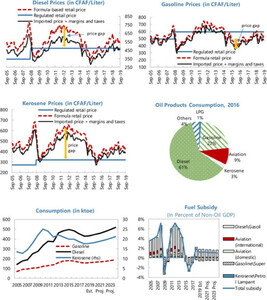 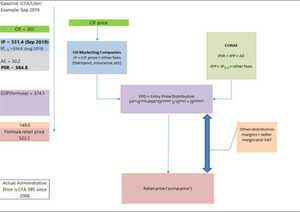 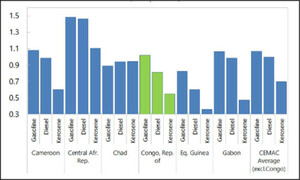 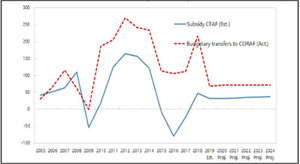