1. Turkey’s economy has grown rapidly over the past decade, mainly by increasing inputs. With an average annual real growth of around 5½ percent over the last 10 years, Turkey has been one of the fastest growing economies in G20 and other larger emerging markets. However, growth has become more unbalanced. Strong post-2009 output growth has been largely due to increased capital accumulation, driven by construction investment activities and financed, in large part externally, and by rapid credit growth. Labor inputs also contributed positively to growth, supported by a pick-up in female labor force participation—but its contribution appears to have leveled off in recent years. Over the same period, the high investment rate (greater than the neoclassical golden rule benchmark would suggest), together with high inflation and elevated private sector and external debt, point to past over-investment.1

2. Growth prospects have weakened due, among other things, to declining total factor productivity (TFP) growth, calling for well-prioritized productivity-enhancing structural reforms. The high contributions of factor inputs is consistent with average annual TFP growth declining from 1.9 percent in 2002-06 to around zero in 2010-18. As the potential of input-led growth is slowing, structural reforms are needed to boost productivity and Turkey’s medium-term growth potential. Nonetheless, as in many other countries, undertaking structural reforms can be economically and politically challenging including due to their possible temporary costs.2 Prioritizing reform measures and packaging reforms to benefit from their complementarities are therefore key to the success and durability of reforms.

3. This paper will assess the role of structural reforms in enhancing productivity growth in advanced and emerging economies, and discuss results that are relevant for Turkey. The paper is structured as follows. To investigate the role of structural reforms in boosting productivity growth, Section B first describes the stochastic frontier set-up for analyzing factors that affect output through technical efficiency; and subsequently presents empirical results. To highlight policy priorities for Turkey, the section also simulates productivity gains from closing the structural reform gaps between Turkey and its benchmark. Section C discusses policy implications and concludes.

4. To estimate the impact of structural reforms on productivity growth, TFP growth is decomposed into contributions from common technological change and a country-specific technical efficiency; and is estimated using a stochastic frontier analysis (SFA) approach. Following Cardarelli and Lusinyan (2015); and Lusinyan (2018), the level of output for country i at time t, Yi,t, can be written as:

As opposed to the traditional way of regressing TFP growth, proxied by a Solow-type residual, on structural reforms variables, the SFA approach allows for a simultaneous estimation of the parameters of the stochastic frontier production function, and the model for technical efficiency using a maximum likelihood method (Battese and Coelli, 1995; and Belotti et al, 2013). Using a loglinear Cobb-Douglas production function with capital (Ki,t) and labor (Li,t) inputs, Equation (1) can be rewritten as:

where ui,t = —ln θi,t is the country-specific inefficiency. The point estimate of technical efficiency can then be calculated as E(exp(— ui,t|ei,t) with ei,t being the model’s error term comprised of the two independent, unobservable, error terms, νi,t — ui,t.

5. The efficiency frontier and technical inefficiency are estimated over cross-country panel data, using a broad range of structural reform variables.4 A sample of about 110 advanced and emerging economies covering 1990-2017 is constructed for the analysis. Macroeconomic variables—such as real output, stock of capital, employment, and output gap—are obtained from the IMF’s World Economic Outlook (WEO) database, the Penn World Table, and the World Bank’s World Development Indicators (WDI). A number of data sources are used for structural reform variables covering the areas highlighted by the literature—such as business regulations, labor market (rigidity, wage-setting, skills), and domestic and foreign competition in the product markets.5 The structural reform variables used in the regressions are those available for a relatively longer time span (See Appendix I for data description and sources). Correlations between structural variables from different sources are also analyzed and presented as robustness checks.

6. Indicators of the business and regulatory environment, as well as labor and product markets are found to affect technical efficiency. The results of the SFA regressions using the aggregate indicators of structural reforms are presented in Table 1, with the first sub-panel showing the estimated frontier production function and the second sub-panel showing the simultaneously estimated model of inefficiency. Better regulatory quality to support private sector development and higher competition in the product markets are associated with higher efficiency (negative impacts on inefficiency). Labor market flexibility, as well as education and training, also help reduce inefficiency. In terms of the magnitude of the impact, labor market flexibility seems to be associated with the largest efficiency gains, followed by competition in the product markets, regulatory quality, and education.

7. Using sub-indicators of these broad reform categories provides a robustness check and highlights specific aspects of labor and product markets that are key to enhancing efficiency. Table 2 displays the results when inefficiency is estimated as a function of detailed structural indicators, which are sub-components of labor market flexibility, product market competition, and education and training.

8. Structural reform priorities for Turkey can be identified by the expected gains from closing existing structural policy gaps. Turkey’s structural policy gaps are measured by comparing the country to the 75th percentile of OECD countries, and the impacts on long-run real GDP growth are simulated for a scenario that assumes that Turkey moves closer to the OECD benchmark. Specifically, as most reforms take time and their effects typically materialize gradually (see for example Dabla-Norris et al, 2015; Bordon et al, 2016; IMF, 2016; and IMF, Forthcoming), the simulation assumes that the structural policy indicators for Turkey converge towards the chosen OECD benchmark over a twenty-year period. Figure 1 presents both the policy gaps between Turkey and the OECD benchmark and the expected long-run gains from closing half of the gaps based on the SFA regression results from Tables 1 and 2.

9. The empirical results should not be viewed as precise payoffs, but rather be used to guide reform prioritization. Due to potential endogeneity problems and also relatively smaller gains found in the recent literature (IMF, 2019), these empirical results should be interpreted with caution. Nevertheless, the relative payoff magnitudes across different reforms could help inform policy prioritization.

11. Structural reforms to improve hiring and firing regulations, the business and regulatory environment, and skills are found to have the largest estimated long-term productivity gains for Turkey. Closing each of these policy gaps by half, relative to the OECD benchmark, is associated with output gains equivalent to an increase in annual real GDP growth of around 0.2-0.3 percentage points. Meanwhile, other structural reforms related to both labor and product markets—such as enhancing competitiveness in the product market, better aligning pay and productivity, and improving worker-employer relations—are also expected to yield positive gains equivalent to about 0.1 percentage point increase in the real GDP growth rate.

12. To bolster Turkey’s sustainable medium-term growth prospects, structural reforms should be implemented sooner rather than later, and any possible negative reform impacts in the short run could be limited by a reform sequencing and reform complementarities. Although the dynamic impact of structural reforms and reform complementarities are beyond the scope of this paper, some other studies find that the short-run negative impacts can be mitigated as follows.7

To focus on the role of country-specific structural reforms, the common technological change is assumed to be zero, as is typically assumed in the existing literature.

In all regressions, the output gap and output volatility variables are also included in the model of inefficiency to control for cyclical variation which could impact efficiency.

See for example, Prati et al (2013), IMF (2015, 2016), Bordon et al (2016), Biljanovska and Sandri (2018), and Lusinyan (2018). Some of these studies also include variables capturing structural reforms related to the financial sector, such as restriction to bank competition and access to finance. In most SFA specification, the coefficient estimates of these variables are statistically insignificant (results not shown here), and hence are dropped from the analysis.

The correlations between some product market reform indicators from different sources are slightly weaker, potentially due to a smaller number of observations (as indicators from alternative sources span over a much shorter time period). However, they remain statistically significant.

It is important to note that, in some cases, even with weak demand and limited fiscal and monetary policy support, the short-run negative effects could be reduced by implementing both labor and product market reforms in tandem (Caldera-Sanchez et al, 2016). Product market reforms to reduce entry barriers and enhance stronger competition could help lower prices, increase output and employment, and so reduce the negative impacts of labor market reforms on real wages and employment. A well-communicated, comprehensive, and credible reform package could also help improve business and consumers’ confidence, which could in turn boost consumption today and reduce the need for excessive precautionary savings. 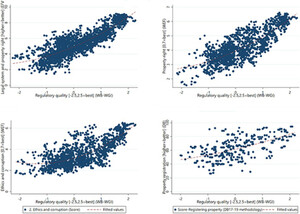 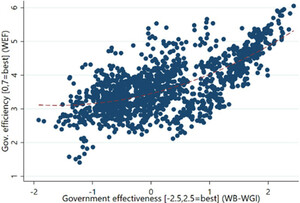 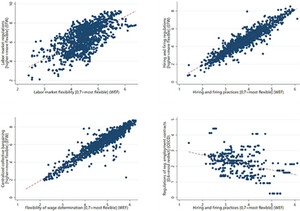 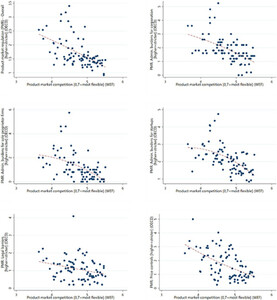