On December 6, 2019, the Executive Board of the International Monetary Fund (IMF) concluded the Article IV consultation1 with Cambodia.

Growth accelerated to 7½ percent in 2018. Economic activity remains robust this year with real GDP growth expected at around 7 percent, owing to continued export growth and strong construction activity, while inflation remains stable at around 2.5 percent.

The current account deficit widened to about 12 percent of GDP in 2018 and is expected to widen further this year. Robust Foreign Direct Investment inflows, as well as an increase in other short-term inflows, have nevertheless contributed to an accumulation of gross international reserves to about 7 months of prospective imports in August 2019.

Financial conditions have been accommodative. Private sector credit, increasingly concentrated in the real-estate and construction sectors, has accelerated and is expected to grow around 28 percent in 2019.

Robust revenue performance continues, and, thanks to strong administrative efforts, the 2018 fiscal balance (following the Government Finance Statistics Manual 2014 format) shows a surplus close to 1 percent of GDP in 2018. The fiscal position is projected to remain in surplus also this year.

Deterioration of external conditions is expected to lead to a slowdown in growth to below 7 percent in 2020. Cambodia’s economic outlook is subject to significant downside risks. The on-going Everything but Arms (EBA) review by the EU—Cambodia’s primary export partner—could lead to a suspension of preferential trade access later next year, which could have a large negative impact on economic activity.

Executive Directors commended Cambodia’s strong and sustained economic growth over the past years and significant progress in reducing poverty. Directors noted, however, that near-term economic activity is likely to moderate and the outlook is subject to notable downside risks, including from a potential suspension of trade preferences under the EU’s Everything But Arms scheme and weaker-than-expected global growth. Directors encouraged the authorities to implement policies to safeguard fiscal sustainability, address macro-financial risks, and support continued progress toward the Sustainable Development Goals (SDGs).

Directors commended the authorities for strong revenue performance, which has helped keep public debt low and allowed government deposits to reach high levels. They welcomed the authorities’ plans to scale up priority social and infrastructure spending given the large needs to meet the SDG targets by 2030. Directors stressed, however, the need to support fiscal sustainability by restraining non-development current spending, including the wage bill, and by continuing to strengthen revenue mobilization and enhance tax efficiency. Directors considered that fiscal governance should be further improved to raise revenue collection, manage fiscal risks from public-private partnerships, increase spending efficiency, including by strengthening public investment management, and reduce opportunities for corruption. Publishing the medium-term fiscal framework and implementing a debt-based fiscal anchor would help safeguard fiscal sustainability over the medium term.

Directors noted positively that the Cambodian financial system is profitable, has sizeable capital buffers, and has low nonperforming loan ratios. They noted, however, that credit has accelerated and is increasingly concentrated in the real estate sector and consumer lending. They called for prompt actions to moderate credit growth, including through additional macroprudential measures and a broad-based policy response to address risks stemming from the real estate sector. Directors considered that lower credit growth, coupled with prudent fiscal policy and structural reforms, would also help reduce external imbalances. Directors called for further progress to strengthen financial sector oversight, including AML/CFT supervision. They noted that promoting further financial market development and local currency use would allow the central bank to move toward a more robust and flexible monetary policy framework.

Directors commended Cambodia’s significant progress toward the SDGs owing to strong economic growth and structural reforms. They welcomed the authorities’ structural reform plan aimed at improving competitiveness and diversification, including through trade facilitation, lowering the cost of doing business, and improving governance. They emphasized that meeting the SDG targets by 2030 will require sustained policy efforts, particularly in improving education and health outcomes and investing in infrastructure. To improve economic resilience, structural constraints should be addressed, including through diversifying growth drivers, ensuring a reliable energy supply, strengthening anti-corruption efforts, and enhancing the regulatory environment. Directors also underscored the importance of renewed efforts to address data gaps and improve data quality. 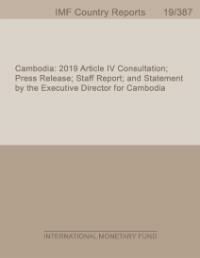