On December 16, the Executive Board of the International Monetary Fund (IMF) concluded the Article IV consultation1 with Barbados. During the same meeting, the Board also completed the second review of Barbados’ economic reform program supported by an arrangement under the Extended Fund Facility (EFF); a press release on the review was issued separately.

During the first nine months of 2019, the economy contracted by 0.2 percent, in line with program projections. With the economy heavily dependent on external demand for tourism services, the impact of the fiscal adjustment on growth has been limited.

Executive Directors agreed with the thrust of the staff appraisal. They welcomed the authorities’ progress in implementing their ambitious homegrown economic reform program. Directors agreed that program implementation has been strong, with notable gains to restoring fiscal sustainability, rebuilding reserves, and increasing growth. They considered that domestic and external risks remain, including weaker global growth, tighter global financial conditions, and vulnerability to natural disasters.

Directors were encouraged by the authorities’ commitment to fiscal discipline and emphasized the importance of achieving and maintaining the targeted primary surplus of 6 percent of GDP. They considered that the FY2019/20 budget provides a solid basis for reaching this target.

Directors welcomed tax reforms aimed at enhancing revenue and considered that improvements in tax and customs administration are essential to support medium-term revenue. They supported the planned adoption of a fiscal rule to sustain the adjustment effort over the medium and long run. Directors also underscored that social spending and an improved safety net to protect low-income households are key priorities for the program.

Directors emphasized that reforms to state-owned enterprises (SOE) are essential for achieving the primary surplus target and maintaining it over the medium term. They supported the authorities’ plans to reduce transfers to SOEs by a combination of stronger oversight, reduced costs, revenue enhancement, and mergers and divestment. Reducing transfers to SOEs will create fiscal space for investment in physical and human capital.

Directors encouraged steps to improve the governance framework of the Central Bank of Barbados (CBB). They underscored the need to limit monetary financing to the government, and strengthen the CBB’s mandate, autonomy, and decision-making structure. Efforts to strengthen the AML/CFT regime were also encouraged.

Directors emphasized that strengthening disaster resilience is key to boosting medium-term economic prospects, particularly as weather-related events could have a major impact on the Barbados economy. They welcomed the inclusion of natural disaster clauses into new debt instruments, noting it will help strengthen Barbados’ protection against natural disasters. 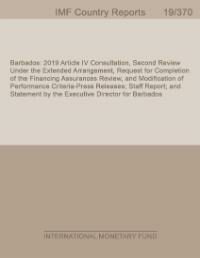