Our Mongolian authorities appreciate the continued engagement with the Fund as well as the candid and constructive discussions during the Article IV mission. Most structural reforms envisaged at the beginning of the EFF program have been implemented. These reforms are supporting the recovery of the economy and providing a strong basis for future economic reforms. Unfortunately, some of the implementation of the post asset quality review (AQR) actions in the banking sector raised some concerns and consequently delayed the EFF program. The authorities recognize the importance of the Fund’s EFF arrangement to reform the country’s economy and are strongly committed to the continuation of the EFF program.

The economy has performed strongly since 2017 supported by the Fund’s EFF arrangement and a buoyant mining sector. The economic outlook is positive, thanks to increased investment into the mining sector and to improved business confidence. The economy is projected to grow at an average annual rate of 5 percent over the medium term. Gross international reserves nearly tripled during the last two years and inflation remained stable within the central bank’s target range of 8 percent. In the medium-term, inflationary pressures persist and this is one of the challenging areas for the authorities to balance with optimal growth policies.

The combination of a strong fiscal consolidation and upbeat mining sector led to a reduction in the primary balance from a deficit of 11.2 percent of GDP in 2016 to a surplus of 5.9 percent of GDP in 2018. Over the last two years, public debt has reduced significantly by 13 percentage points of GDP. It is worthwhile to note that two-thirds of the overall adjustment came from reduced expenditure.

Inflation for the first half of this year is 7.4 percent, close to the central bank’s target. The exchange rate has remained stable, and the monetary policy rate is unchanged since December 2018. The macroprudential measure to introduce a debt service to income ratio of 60 percent has provided positive results, reducing the pace of credit growth and protecting households from indebtedness. The central bank will continue with a cautious monetary policy stance and will take every opportunity to build foreign reserves.

The lack of quality time-series data and robust formal studies of the monetary transmission mechanism and the role of exchange rate flexibility in Mongolia creates challenges for the authorities to implement policy actions effectively. The authorities are keen to work with the Fund in conducting more studies on these areas to improve capability to undertake policy actions by the central bank.

The authorities are working to address AML/CFT deficiencies identified by the Asia Pacific Group. The possibility of grey listing and withdrawal of correspondent banking relationships may impact the economic environment dramatically, and the authorities are committed to resolving remaining issues identified by the AML/CFT framework. Further work remains to be done, including increasing the supervision of non-bank financial institutions and high-risk entities and improving criminal investigation into possible cases of money laundering.

The 6th review of the EFF program is delayed, due to a lack of progress on completion of two financial sector actions. Quantitative targets for previous reviews were met continuously and in some cases met with big margins. On structural reforms, numerous fiscal, monetary and financial markets reforms have been undertaken since the start of the program, and these reforms provide a strong foundation for building a resilient economy.

The remaining major structural reform is strengthening the banking sector. The AQR concluded in 2018 and showed that a number of banks were required to increase their capital. These banks raised their required capital by December of 2018, however some capital-raising transactions raised some concern in terms of consistency with local laws and international best practice.

As requested by the staff, a specialist firm completed a forensic audit between June to August of this year into these capital-raising transactions. The forensic audit has revealed a number of irregularities in the transactions aimed at recapitalizing banks following the AQR. The authorities are analyzing the findings of the audit and, in consultation with staff, considering what steps to take.

The authorities are committed in taking all necessary actions to implement the remaining items of the post-AQR in the banking sector and complete the 6th review of the program.

We thank staff for providing selected issues papers on the principal governance challenges and achieving green and inclusive growth in Mongolia. The authorities broadly agree with the main findings and recommendations of papers. Improving governance, reducing poverty, achieving green and inclusive growth are challenging issues which need attention from the authorities. The main recommendations from these papers, such as using tax policy to resolve overgrazing and climate issues, tackling corruption, improving fiscal and central bank governance, are important and the analysis will be useful in future reform packages.

The economy of Mongolia performed strongly, averted financial crisis and recovered over the last two years thanks to the EFF program and a positive external environment. Despite these positive developments the authorities are keenly aware that current buffers are not adequate, the country is still vulnerable to external shocks and Mongolia should continue with structural reforms and to build fiscal buffers and reserves.

The Fund’s continued engagement through the EFF program and support from development partners are vital in achieving macroeconomic stability. 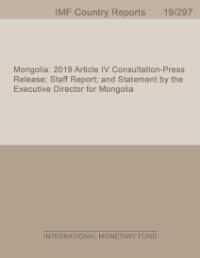