Request for Three-Year Arrangement Under the Extended Credit Facility-Press Release; Staff Report; and Statement by the Executive Director for Mali

Request for Three-Year Arrangement Under the Extended Credit Facility-Press Release; Staff Report; and Statement by the Executive Director for Mali

On August 28, 2019, the Executive Board of the International Monetary Fund (IMF) approved a new three-year arrangement under the IMF’s Extended Credit Facility (ECF) for Mali in the amount of SDR 139.95 million (about US$191.9 million), as well as the release of the first disbursement under the arrangement of SDR 20 million (about US$27.4 million).

“Mali has made significant progress under the previous Fund-supported program despite challenging conditions. Looking ahead, while the economic outlook remains generally positive, it is subject to important downside risks related to possible challenges arising from the security situation, potential shocks to the terms of trade (the price of gold, cotton, and fuels), and adverse weather conditions.

“The authorities’ corrective measures taken in the first half of 2019 have significantly improved domestic revenue collection. Going forward, decisive efforts aimed at domestic resource mobilization through tax policy and revenue administration reforms will be key to meeting the ambitious, but realistic program targets. The fiscal framework of the program is robust and adequate mechanisms are in place to deal with any revenue shortfall.

“The authorities’ reform strategy for the state-owned electricity company (EDM-SA) is welcome in view of its strategic importance for the Malian economy. The authorities are encouraged to seek participation from the commercial banks in the financial restructuring of the company.

“Going forward, it is essential to pursue greater spending efficiency, including through strengthened project selection and execution, as well as the rationalization of subsidies. The authorities’ efforts to increase financial inclusion and narrow the gender gap, including by direct measures to economically empower women are welcome. Steadfast perseverance in the government’s efforts to improve governance and fight corruption would also enhance the business climate.” 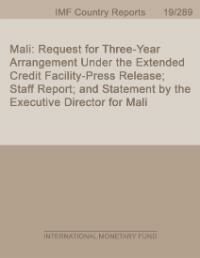 Sources: Ministry of Finance; and IMF staff estimates and projections.