1. The financial sector of the Democratic Republic of the Congo (DRC) is shallow, underdeveloped, and dominated by banks. The financial sector comprises 17 active licensed banks (including the BIAC currently under Central Bank of Congo (BCC) administration) with total assets of US$5.3 billion (or 7 percent of GDP at end-2018). Banks can be classified in three groups: (i) 3 large banks (Rawbank, BCDC, and TMB), which dominate the sector with 49 percent of total assets, 53 percent of deposits, and 49 percent of loans; (ii) 4 medium size banks (Equity Bank, Ecobank, Afriland FB, and FBNBANK DRC) with 48 percent of total assets, 32 percent of deposits, and 31 percent of loans; and (iii) 10 small banks. One of the smallest banks, Advans Banque, applied to become a microfinance institution (MFI). The relatively large high number of lenders is due to loose banking regulations and relatively low minimum capital requirements. The competition is fierce, but many banks are poorly capitalized which leaves them vulnerable to shocks. Out of the 17 banks, 10 have met the capital requirements of US$30 million, and the remaining 7 should comply before the end of the year. The minimum capital requirements will increase to US$50 million at end-2020. Over 85 percent of loans and deposits are concentrated in the provinces of Haut-Katanga and Kinshasa.

2. The financial sector is highly dollarized. At end-2018, 90 percent of deposits were in US dollars. Banks’ funding is mainly composed of sight deposits from the private sector (companies and households hold, respectively, 37 and 54 percent of total deposits). 94 percent of loans are also denominated in US dollars, with the largest share of clients being commercial entities (59 percent of total loans) mostly in the trade, services, and mining sectors.

3. Non-bank financial institutions are numerous but represent only 5 percent of the banking system’s assets. They are a state insurance company (SONAs), the National Social Security Institute (INSS), 4 private insurance companies and 2 insurance brokers, 5 specialized institutions, 98 microfinance intermediaries (cooperatives and MFIs) 83 financial messaging companies, and 32 forex exchange bureaus. There are no stock or debt capital markets in the DRC.

5. Correspondent banks are few and represent an important vulnerability of the financial sector. Three banks serve as correspondent banks in principle, however Citibank is the only effective operator. The BCC has been facilitating operations to settle international transactions among local banks as using swift transfers could be time consuming and, consequently, avoiding international regulation. Some prominent Congolese nationals have been sanctioned by the USA and the EU, affecting negatively the country’s image. Completing AML/CFT framework and adopting anti-corruption laws are crucial to avoid disruptions in the financial sector, limit transaction costs, and protect bank ratings.

6. The banking regulatory framework is being strengthened. A new Central Bank Law entered into force in January 2019. It enhanced the BCC functional and financial autonomy and strengthened its governance, transparency, and accountability frameworks. The Banking Law governing all credit institutions is being revised.

7. The mining sector is a key driver of the country’s economy as it represents the main source of growth. It represented about 10 percent of GDP and 94 percent of exports and contributed to 40 percent of GDP growth in 2018. The sector is composed by industrial mining dominated by foreign companies driving large scale mining and artisanal mining. Both industrial and artisanal mining employ officially only around 4 percent of Congolese workers. [However, it is estimated that [10] million people depend directly or indirectly from the artisanal mining sector, or 12.5 percent of the total population]. The sector is entirely dollarized and plays an essential role in ensuring the availability of foreign currency. While the 2002 Mining Code was designed to attract foreign investment, the 2018 Mining Code aims at increasing spillovers to the rest of the economy. To that effect, taxes and royalties increased, and the mandatory repatriation of export revenues was raised to 60 percent from 40 percent previously (see SIP on Natural Resource Management).

8. The exposure to commodity price or production shocks has strong macro-financial implications. The recent commodity price shock illustrates well the vulnerabilities of the country and its financial system (Figure 1). Copper—accounting for 50 percent of exports—lost 45 percent of its value compared to 2011. The currency depreciated by a cumulative 71 percent, and inflation rose by 42 percent between 2015 and 2017. Fiscal revenues dropped by more than 2 percentage points of GDP as resource revenue accounts for about a quarter of fiscal revenues. Even with a drastic reduction of its expenditure levels, government deposits at the BCC were depleted, the rule of no BCC financing of the budget was breached, and domestic arrears started to be accumulated. In that context, foreign reserves dropped below 3 weeks of imports.

9. Given limited buffers and access to external financing, the government response to the shock affected the banking system in various ways. The lower level of public spending hit the non-mining sector directly through economic agents depending on public contracts. This triggered lower growth in the non-mining sector and an increase in NPLs as public contracts did not materialize or obligations were not honored as the government accumulated domestic arrears. Net credit to the government by the banking system increased, as the government had limited means to finance its increased deficit, leading to a crowding out of credit to the private sector. Additionally, the fiscal deficit was monetized by the BCC which fueled inflation and led to a depreciation of the local currency. This affected the purchasing power of domestic economic agents and their capacity to repay bank loans and exposed banks to currency risks from a mismatch between assets and liabilities in foreign currency. The resulting and compounded increase in NPLs weakened the balance sheet of the banks.

Source: Central Bank of the Democratic Republic of the Congo (BCC).
Text Table 1.

Source: Central Bank of the Democratic Republic of the Congo (BCC).

10. Most financial soundness indicators deteriorated dramatically since 2014 (Text Table 1), showing the low resilience of the financial sector to external shocks. Loans are mostly denominated in foreign currency (94 percent in 2018), but many borrowers’ income is in local currency. As a result, employees that are paid in Congolese franc reportedly convert their salaries in foreign currency immediately to minimize exchange rate risk. NPLs reached almost 17 percent of total loans in 2018, up from 7 percent in 2014 as a result of the difficulties faced by domestic borrowers to reimburse their loans following a large exchange rate depreciation and a slowing economy. In addition, the accumulation of domestic arrears by the government worsened the situation of private suppliers depending on public contracts. The return on assets became negative during the crisis and capital adequacy ratios worsened. An increase in capital requirements, to be completed by 2020, is expected to reverse this. By contrast, liquidity ratios strengthened over this period, reflecting a more prudent attitude by banks.

11. Direct credit risk to the mining sector appears limited. Mining companies operating in the DRC are mostly foreign-owned and have limited borrowing from banks operating in the DRC. Loans from extractive industries represented only 8 percent of total loans as of January 2019, likely from the artisanal mining sector. Credit growth is correlated to the non-mining sector as most of the loans are concentrated in the trade sector, however, it seems that there is a strong correlation between the increase in NPLs and the fall in copper prices (Figure 2), which suggest a strong spillover of the mining industry to the rest of the economy and the banking system.

12. Monetary policy has limited impact on the banking system as transmission channels are weak. The share of transactions in local currency in the banking system is limited. Efforts to reduce dollarization stopped during the crisis and the authorities even asked mining companies to pay their taxes in foreign currency. The banks have ample liquidity in both local and foreign currency. The BCC has tried to mop up excess liquidity without much success. The increases in the policy rate and in the mandatory reserve requirement ratios had limited results. Issuance of BCC bonds would be a more effective instrument of monetary policy. However, the BCC is undercapitalized, which weakens its operational position and its ability to conduct an effective monetary policy.

13. Financial inclusion is weak with a penetration rate of 6 percent, against the (already limited) SSA average of around 25 percent. The DRC made considerable progress in account ownership, from less than 4 percent to a quarter of the population between 2011 and 2017. However, the country still lags its peers with 40 percent less account ownership than the average for the SSA region (Text Table 2). The difference in account ownership between men and women has been largely eliminated, and the country is performing better than the rest of the region in reducing that gender gap. Increasing financial inclusion would help increase the effectiveness of monetary policy.

14. The microfinance sector could play a major role in supporting inclusive growth and reduce poverty. It has been growing rapidly but remains underdeveloped, with US$262 million in assets in 2018 compared to US$230 million in 2013. The sector is composed of 20 MFIs and 78 cooperatives and is concentrated in three provinces (North and South Kivu and Kinshasa). It operates under BCC regulation. The sector is largely focused on savings and loan services, with deposits and loans representing respectively US$217 and US$127 million in 2018 (compared to deposits of US$162 million and loans of US$118 million in 2013). The sector is highly concentrated (and unprofitable) with the three leading institutions that specialize in loans to micro, small, and medium enterprises accounting for 44.2 percent of the microfinance sector.

15. Financial stability depends on the country’s ability to build buffers against external shocks and on an appropriate regulatory framework. This would require a combination of appropriate policies.

Macro-Financial Linkages in the Case of an External Negative Shock 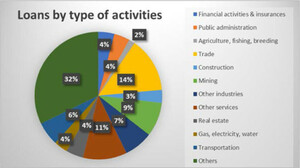 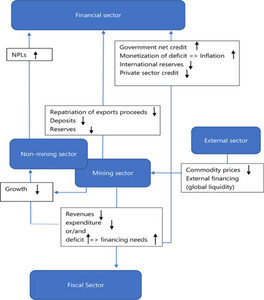