The Spillover Effects of the U.S.—China Trade Policies1

As the two largest economies of the world, the U.S.—China trade tensions pose a key risk to the rest of the world. Both continued tension or any managed trade deal is likely to result in trade diversions and negative sectoral effects for some via supply chain dislocations—and will also be a step away from multilateral solutions. In the absence of a meaningful boost in China’s domestic demand and imports, bilateral purchase commitments are likely to generate substantial trade diversion effects. For example, the European Union, Japan, and Korea are likely to have substantial “exports-at-risk” due to exposure in items like vehicles, machinery, and electronics. Small oil exporters and some ASEAN economies would also be significantly affected. Trade tensions between the U.S. and China should thus be quickly resolved through a comprehensive agreement that supports the international system and avoids managed trade.

A. The U.S.—China Trade Policies

1. As the two largest economies of the world, the outcome of the U.S./China trade talks—either a deal or higher tariff imposition—would have important implications for the rest of the world.

B. Closing the U.S.—China Bilateral Trade Deficit Via Managed Trade

2. In the event of a new deal that involves China purchasing U.S. goods to reduce the bilateral trade balance, there will be significant trade diversion effects. From late 2018 to around April 2019, the U.S.—China trade policy rhetoric had focused on a plan to eliminate the U.S. trade deficit with China over a couple of years, through China stepping up purchases of U.S. goods. In addition, the discussions focused on China committing to structural reforms in IP, technology transfers, and SOEs. Given that China is unlikely to significantly boost domestic demand in the short-run to accommodate significantly higher imports, the increase in purchases from the U.S.—if a similar deal materializes— is likely to be offset by decrease in imports from rest of the world, leading to huge trade diversions.

3. The type of products that China purchases will determine which countries get affected due to trade diversion. The above chart shows China’s product structure across the top-ten items imported from the U.S., ranked according to the size of imports—i.e. electronics is China’s top imports from the U.S. and wood pulp is the 10th. The right-hand side of the figure, showing other countries’ export exposure towards China’s purchase of these products, gives a good intuition of whose exports might be at risk. For example, purchases of more oil seeds (e.g. soya beans) will affect countries like Brazil, Canada, and Argentina; purchases of vehicles will affect Germany, Japan, and the U.K.; purchases of aircrafts will affect France and Germany; while purchases of machinery will affect Japan, Germany, and Korea.

4. To identify the likely affected countries, we examine the spillover effect of a scenario where the U.S.—China bilateral trade deficit is reduced to almost zero. It is assumed that China will close the trade deficit (USD 336bn in 2017) by purchasing U.S. goods, and China’s total imports will not change—in other words, the extra purchases from the U.S. will be at the expense of cutting purchases from the rest of the world.

Targeting bilateral trade balances will not help to reduce a country’s overall current account deficit. Changes in current account balances—the difference between national saving and investment—is best achieved through adjustments to macroeconomic policies that influence saving/investment decisions, not trade policies (see IMF World Economic Outlook, April 2019; IMF External Sector Report 2018). Tariff increases, for example, will have no significant effect on the trade balance, as the impact of lower imports will be offset by an appreciation of the currency. Hence, reducing the bilateral trade deficit with China might not result in a decline of the overall U.S. trade balance.

Though declining over time, China’s gross exports to the U.S. continue to include significant value added from other countries (including U.S.). The U.S. bilateral trade balance with China in 2015 (the latest available data in OECD TiVa database) was 13 percent lower in value added, compared to gross terms (see 2019 China Selected Issues Paper “The Drivers, Implications and Outlook for China’s Shrinking Current Account Surplus”). Similarly, China’s gross exports to the U.S. (as the final destination) included 82.3 percent of China’s domestic value added in 2015, up from 76.7 percent in 2008, with the rest of the value added coming from economies like Germany, Japan, Taiwan Province of China, Korea, and U.S. In other words—apart from the traditional channels of trade diversion— policies affecting U.S.—China bilateral trade will also have direct implications for the rest of the world due to supply chain linkages amongst countries.

6. Which countries will be affected? China’s top-ten non-U.S. exporters for each product is considered. For the identified amounts of each product, the loss in exports of other countries will be proportional to their share in China’s imports in that product—the countries that are more exposed to these products will have more “exports-at-risk”.

7. There will be substantial “exports-at-risk” for European Union, Japan, and Korea.2 Putting everything together, the scenario analysis shows that there is likely to be “exports-at-risk” worth: USD 61bn from European Union countries included in our sample due to significant exposure in vehicles, machinery and aircraft; USD 54bn from Japan (machinery, vehicles, and electronics); USD 46bn from Korea (electronics, opticals, plastics); and USD 45bn from ASEAN countries (electronics, plastics, machinery). In addition, there will be substantial “exports-at-risk” from oil exporters and soya bean producers.

10. In the absence of a meaningful boost in China’s domestic demand and imports, bilateral purchase commitments are thus likely to generate substantial trade diversion effects. Some of the caveats of this exercise should be borne in mind. The scenario analysis assumes perfect substitution of imports across countries and does not take into account rigidities associated with existing GVCs, established relationships, etc. Smaller countries may be more affected if the burden of adjustment falls more on primary products and more easily substitutable homogeneous commodities and less on sophisticated manufactured goods and electronics. In addition, the “exports-at-risk” is not the same as the value added that could be lost. The impact on value added depends upon factors like how easy it would be to switch to other markets. Finally, the analysis is performed on 2-digit Harmonized System (HS) codes. In some cases, the products can be considerably different under the same 2-digit code. Robustness check using HS 6-digit data suggest that the results are mostly similar (Box 2).

The main results are robust to using more granular data. Of the 39 economies reported, the differences in the “exports-at-risk” (as a share of individual economies’ GDP) are within 1 percentage points for 35 and within 0.1 percentage points for 8. The total “exports-at-risk” in US dollar terms for aggregates can differ due to the inclusion of more countries in the robustness analysis (see footnote 2 of main text). For example, while the total “exports-at-risk” for European Union is higher in the robustness analysis due to the inclusion of all countries, the underlying numbers for the countries present in both samples are similar: e.g. 1 percent of GDP for Germany in both cases, 0.3 (2-digit) versus 0.2 (6-digit) percent of GDP for France.

11. While the resumption of trade talks between the U.S. and China in June 2019 is welcome, the already implemented tariffs are holding back global trade, and the unresolved issues create uncertainty about the future.3 The U.S.-China tariff increases in 2018 and related uncertainties led to a slowdown in global trade and industrial production, and are weighing on investment and business sentiment (IMF External Sector Report, 2019). The additional tariffs announced by the U.S. and China in May 2019 should have negative effects for both the countries directly involved and many others owing to GVCs and cross-border investments. Simulations suggest that global GDP could decline by an additional 0.3 percent in 2020 due to these measures, on top of the impact of the 2018 tariffs, which have been projected to lower global GDP by 0.2 percent in 2020 (see G-20 surveillance note, June 2019; October 2018 IMF World Economic Outlook).4 The detrimental effects of tariffs are due to the decline of trade and dampening of confidence and financial market sentiment, leading to adverse effects on investment, productivity, and growth.5

12. In the scenario of increased trade tension and tariff imposition, sectoral spillovers across some countries are likely to be large as global value chains are repositioned. The impact of the U.S.-China tariffs will be disruptive to GVCs and could have negative spillover effects, as countries tend to have forward participation with China. This is also evident from the fact that China’s exports of some of the “affected” items contain significant value added from other countries (e.g. Australia, Korea, Germany; Figure 2). Using a multi-sector computable general equilibrium (CGE) trade model calibrated to 165 countries, Caceres, Cerdeiro, and Mano (2019) find that a potential escalation in bilateral tariffs between the U.S. and China could lead to significant sectoral disruptions and the positive and negative spillovers to highly exposed ‘by-stander’ economies can be large.6

13. Trade tensions between the U.S. and China should thus be quickly resolved through a comprehensive agreement that supports the international system and avoids managed trade. It is important that an agreement between the two large and systemically important trading partners serves to reinforce WTO rules, is non-discriminatory, and is based on market mechanisms and macroeconomic fundamentals.

Prepared by Pragyan Deb, Albe Gjonbalaj, and Swarnali A. Hannan.

See Chapter 1 of the October 2018 World Economic Outlook for a detailed description of the channels at work.

(In percent US GDP)

Origin of value added in China’s exports to the U.S.

In billions of US dollar

Results from Alternative Scenarios of the Trade Deal

Origin of Value Added in China’s Exports to the U.S. in Likely Affected Industries

GVC Integration with China in 2015 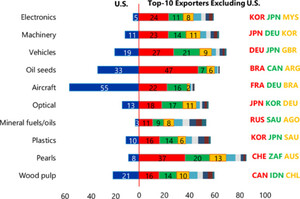 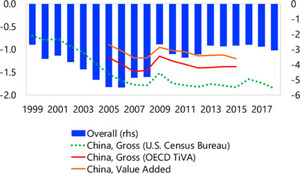 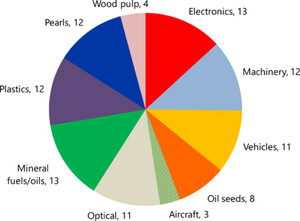 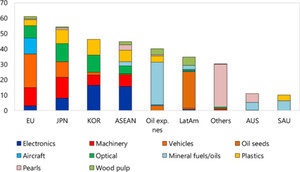 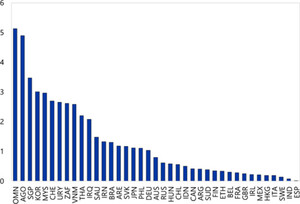 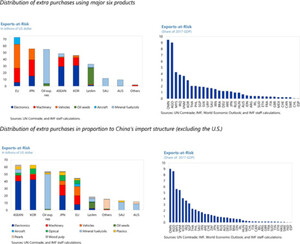 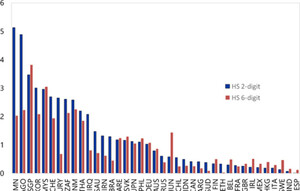 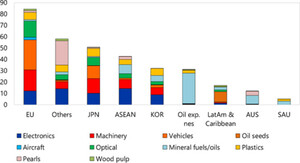 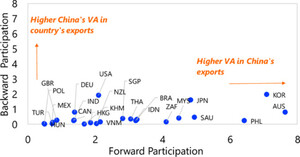