2. The growth-at-risk (GaR) framework links both financial conditions and macrofinancial vulnerability to the probability distribution of future GDP growth (IMF, 2017; IMF, 2018). The GaR framework offers a number of appealing features that enhance macrofinancial surveillance, which has focused on the central forecast. First, it allows to take into consideration the entire growth distribution—reflecting both downside and upside risks—in addition to the central forecast. Second, it provides a framework to analyze key driving factors for future real GDP growth, including their relative importance over different forecasting horizons.2 Third, it helps quantify the impact of systemic risk on future real GDP growth and the intertemporal tradeoff associated with a tighter macroprudential stance.3

4. Financial conditions serve as a useful predictor for downside risks to GDP growth (Adrian and others, 2019). Using the principal component analysis (PCA), the financial condition index (FCI) is constructed by extracting the first principal component from a collection of eight financial variables. As shown Figure 1, the FCI is found to be a good leading indicator of GDP. The accompanying factor loadings show that both domestic and external financial conditions (e.g., sovereign spreads and VIX) play an important role in explaining future GDP growth in Indonesia. The Global Financial Crisis is clearly reflected in the FCI by a sharp tightening, and other episodes, such as the taper tantrum in 2013 and the global stock market in 2015, are also noticeable, which reflect well the heavy reliance on capital flows to finance the current account and fiscal deficits.

5. Financial conditions in Indonesia have tightened to a neutral level at end-2018. This tightening has been mainly driven by worsening external financial conditions and global trade tensions, whose developments Indonesia remains exposed to. It was also partly contributed by BI’s policy rate hikes, which was done as a response to the global market turbulence and the EM sell-off in 2018. However, financial conditions in Indonesia are still at the neutral level by historical standards and are expected to loosen a bit in 2019:Q1, based on growing optimism about U.S.China trade negotiations and expectations that major central banks would take a more patient approach to monetary policy normalization. Thus, they would continue to be supportive of growth in the near term for Indonesia.

7. As of end-2018, macrofinancial vulnerability is broadly contained. Indonesia’s external debt is still moderate and sustainable. The credit cycle moved out of a prolonged downturn with credit gap closing, and the banking system remains broadly sound with large capital buffers, strong profitability, and asset quality improvement. However, the vulnerability level turned to slight positive as current account deficits were widened and corporate external debt increased.4 It can be elevated further if credit, especially to the corporate sector, grows rapidly without reins.

9. Given the neutral financial conditions and macrofinancial vulnerability, the 2019 GDP growth rate is most likely to be 5.2 percent under the baseline (Figure 4). The distribution of 4-quarter ahead GDP growth is derived by fitting a t-skew distribution to predicted values of the conditional quantile regressions. The predicted growth mode for one-year ahead closely tracks the realized growth, especially since the global financial crisis (the bottom left chart). The GaR at 5 percent is 2.7 percent, implying that there is a 5 percent chance that real GDP in 2019 will grow by at most 2.7 percent. The probability of a recession is less than 1 percent in 2019 (the bottom right chart). The interquartile interval of the GDP forecast ranges from 3.9 to 5.3 percent at the end of 2019, with the mode and median being 5.2 and 4.5 percent.

For example, in the near term, loose financial conditions can help support growth. But, over the medium-term, they can induce a build-up of macrofinancial imbalances that could undermine growth down the road.

While such a tightening could induce a short-term slowdown, it could lower the medium-term downside risks to growth with contained macrofinancial vulnerabilities.

Current account deficits are expected to gradually narrow over the medium term. 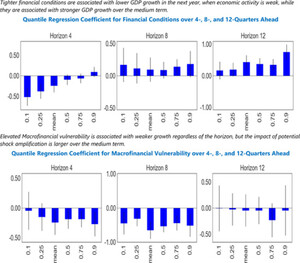