The solid performance of the economy continues to be supported by domestic demand and labor market pressures are gradually building.

The solid performance of the economy continues to be supported by domestic demand and labor market pressures are gradually building.

On June 5, general elections took place in Denmark, resulting in a new parliamentary majority. Government formation negotiations are ongoing, and a new government’s policy views are forthcoming. On behalf of the outgoing caretaker government and other Danish authorities, we would like to thank staff for candid and constructive policy discussions during the Article IV mission held in May. The authorities appreciate staff’s high-quality report and analytical work on relevant issues.

The Danish economy has been growing robustly for the past four years, where growth in GDP has averaged more than two percent per year. Employment has increased continuously since 2013 and has reached a high level. There is a solid foundation for the expansion to continue in 2019 and 2020, where domestic demand is expected to be the main growth driver.

Risks to the outlook are mainly to the downside. There is uncertainty surrounding the strength of the global economy, which is exacerbated by the ongoing trade conflict between the United States and China. At the same time, the future relations between the United Kingdom and the EU after Brexit are still unclear. A no-deal Brexit would affect the Danish economy more strongly than most other European countries.

The Danish economy is operating above normal capacity utilization. Monetary policy in the euro area remains extraordinarily expansionary and is expected to remain so for some time. This underscores the important role of other policies in supporting economic stability.

For more than two decades, Danish fiscal policy has been conducted within a forward-looking medium-term fiscal framework. The associated plans contain operational targets for the medium-term structural fiscal balance and play an important role in ensuring long-term fiscal sustainability. The most recent update of the 2025-plan aims at structural fiscal balance in 2025.

The Budget Law was introduced in 2012 and took effect from the fiscal year of 2014. A key feature is expenditure ceilings, which set legally binding limits for expenditures in central government, municipalities, and regions respectively. The expenditure ceilings have, to date, put an end to the recurrent expenditure slippages, which were the Achilles heel of Danish fiscal outcomes for much of the 1990s and 2000s. The Budget Law also implements the European Fiscal Compact in Danish law, including a structural deficit limit of 0.5 percent of GDP, but also allowing for some flexibility in exceptional circumstances such as, e.g., a severe economic downturn.

The Budget Law will be evaluated in the parliamentary session that starts after the summer on the basis of, inter alia, comprehensive analyses of the experience with the Budget Law so far.

Wide-ranging reforms – of retirement and early retirement rules, the labor market, and taxes -have contributed significantly to the growing labor supply in recent years and will continue to do so in the coming years. This has mitigated the build-up of capacity pressures in the economy.

Whereas the isolated impact of fiscal policy initiatives from 2014 to 2018 has been broadly neutral for demand, the strengthening of the supply-side through reforms has helped to accommodate the growing demand and dampen the gradual build-up of capacity pressures.

Overall, the combined impact of fiscal and structural policies from 2014 to 2018 is estimated to have dampened capacity pressures to the tune of 0.8 per cent of GDP – helping to ensure that the estimated output gap is only moderately positive at around 1 percent currently.

The outgoing government and a broad majority in the Danish Parliament has been committed to strengthen the fight against money laundering and terror financing. The AML/CFT framework must be effective and the sanctions severe.

On March 27, 2019, a broad majority of the parties in the Danish Parliament agreed on a new political agreement, which contains 16 initiatives to strengthening the AML/CFT regulation and expanding the Danish Financial Supervisory Authority’s (FSA) sanctioning powers.

With the March agreement, the FSA will have additional tools for control and intervention, among other things be able to levy administrative fine notices for non-compliance with the AML/CFT obligations. In addition, the FSA has had its budgetary resources increased significantly. The agreement’s thrust is to make sure that there are tougher consequences when bank management fails its responsibility, and to ensure that the authorities have the resources and means to achieve an AML/CFT supervision in the European elite.

This agreement further builds on a political agreement from September 2018, in which a broad majority of parties in the Parliament agreed that Denmark, within the framework of the Danish EU opt-outs, will actively participate in the upcoming and ongoing international work (at EU level and at Nordic/Baltic level) to strengthen and increase cross-border cooperation in the fight against money laundering and terror financing.

As regards considerations on Danish participation in the Banking Union, a designated government committee was established in July 2017. The committee is expected to conclude its work with a final report to the Government in fall 2019.

The authorities welcome staff’s assessment that Danmarks Nationalbank should remain ready to defend the peg. Maintaining the peg to the euro is the exclusive policy objective and hence, monetary policy rates are adjusted solely to keep the krone stable against the euro. Other considerations – such as cyclical developments in Denmark – are not taken into account when setting monetary policy rates.

The authorities agree that the current account surplus is high, although the surplus declined notably in 2018. A current account surplus is not a policy objective per se, but the result of individual decisions by households and corporations. The surplus partially reflects a high private sector savings surplus in Denmark through the build-up of labor market pensions. For many years, Denmark has had a focus on preparing for future demographic changes due to an aging population. To some extent, the surplus may also reflect deleveraging among households with high levels of debt. Finally, public finances are designed to be sustainable in the long run. 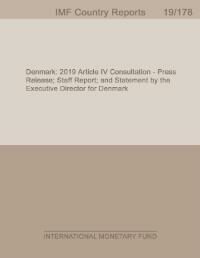