2. Why the SBC approach? While other approaches are available, ranging from simple detrended price-to-income indicators and regression analysis to more complicated structural dynamic economic models, the SBC approach has several attractive features:

3. The chapter proceeds as follows. Section B outlines the SBC approach and its implications for households’ borrowing capacity. Section C describes the data and assumptions used in the analysis and sections D and E discuss the results and other findings. Section F concludes with a summary of the findings and a policy discussion.

4. The static borrowing-capacity approach (SBC) determines how much housing a household can afford given its income, the prevailing mortgage rate, and leverage requirements.4 A household can allocate a portion α of its income Yt (at origination) to service its mortgage payment, At:

Household’s mortgage loan, Lt, and its savings for the down payment, Dt, add up to the “housing”, PHt, it can attain:

5. Assumptions about each household’s down payment are crucial for estimates of “attainable” house prices. One possible assumption is to consider the down payment as a constant share of income, or household wealth. Another option is to let households choose their down payment as implied by a stable loan-to-value (LTV) ratio (for example, a down payment of 20 percent of the property price). Given that a stable LTV is observed for the marginal buyer, it is used in the baseline model, resulting in a closed-form solution for attainable housing:

7. In the long term, house price deviations from fundamentals will adjust through changes in price, changes in borrowing capacity, or both. Deviations from fundamentals can be caused by supply-side constraints and a number of other factors (e.g. speculation). The bigger the deviation, the higher the risk of a sharp correction in prices. This is because house prices can adjust more quickly than housing supply and income.

8. The analysis uses data from a variety of sources. Detailed descriptions and data references can be found in the appendix.

9. Median-income households are assumed to take on mortgage loans for 25 years with interest rates fixed for 5-year intervals. Correspondingly, “conventional mortgage lending rate” for the five-year term from CMHC is used in all computations. Unless otherwise noted, the baseline loan-to-value (LTV) ratio is 80 percent. The fixed LTV affects estimated house price levels but not their dynamics. Median-income households are assumed to be the prospective buyers of median-priced housing. House prices are sourced from Real Property Solutions and Teranet, expressed in nominal Canadian dollars.

10. The share of income allocated to DSTI at origination, a, is a crucial assumption. An obvious option is to set a to an identical value across all CMAs, say 30 percent of after-tax median household income. This choice, however, ignores the fact that there may be good reasons for a to vary across regions. Even under an assumption of perfect regional mobility and households equalizing utility across regions, outlays on housing as a share of income can differ, as indicated by the literature on spatial equilibrium (see Roback, 1982, for example). Regions differ in their amenities, productivity, local taxes, price of services, etc. But even with the same amenities, the share of income allocated for housing expenses may vary with income. For instance, earning C$100,000 a year and paying 50 percent of your income on housing may still be preferable to earning C$70,000, allocating “only” 30 percent of your income to housing, and having lower “ex-housing residual income”.8

11. For transparency, both the region-specific housing share of income, a, and the common share are used in the analysis. To estimate the region-specific aut, SBC formula (4) is used with available income, mortgage rate, and observed regional house prices. An average for 2004—2006 is then used for the whole sample of 2000Q1—2018Q4. The normalization aims to avoid the sample around the dot-com and financial crisis episodes.

13. However, house prices in Hamilton, Toronto, and Vancouver are significantly higher than estimated attainable levels. The pricing gaps in 2018 are around 50 percent for Toronto and Vancouver, and almost 60 percent for Hamilton.10 Additional factors beyond borrowing capacity are needed to explain the evolution of house prices in these CMAs, such as supply-side factors.11 Such large pricing gaps are not without precedent in Canada, with developments in Calgary and Edmonton over 2006 to 2012 being examples.

15. The experience of Calgary and Edmonton metropolitan areas are examples of a “soft landing”. In Edmonton, the median house price exceeded the attainable level by 60 percent at its peak in 2007Q3 (figure 3). By 2012Q1, the median price became more aligned with fundamentals due to a moderate decline in house prices, income growth, and sizable declines in mortgage interest rates. Their experience suggest that market exuberance and supply constraints may widen the price deviation from fundamentals only temporarily. In this context, Calgary and Edmonton offer credence to the magnitude of the price deviations in Hamilton, Toronto, and Vancouver and reassurance that the gaps will eventually close. However, the adjustment path will be different because such a large decline in mortgage rates is unlikely in the future.

16. Real estate transactions occurring at very elevated prices suggest a rising share of purchases by households with high income. For example, in 2016, households in Toronto with 1.7 times median income could comfortably afford to devote 30 percent of their income to mortgage debt servicing. There were at least 20 percent of such households in the Toronto CMA, but this share has shrunk as house prices have continued to climb since 2016. As a result, housing affordability has deteriorated.

17. There are sizable differences in DSTI ratios across CMAs. Figure 4 displays the estimates for all the CMAs.12 The share of income needed to service the mortgage loan to afford housing at a prevailing price depends on the definition of income (household income vs. family income) but the relative differences are stable. In Toronto, Vancouver, or Victoria median-income households would need to devote more than 50 percent of their after-tax income to housing. The share is considerably lower in other CMAs, averaging around 30 percent. In Hamilton, the share was around 30 percent up until 2016, and then a sharp increase in house prices pushed the required DSTI for the median household towards 45 percent.

18. As mortgage rates increase, house prices need not decline if income growth compensates for rising interest costs. If mortgage interest rates continue to increase, they will put house prices under pressure. Without additional policy measures, income growth will be the decisive factor for keeping attainable house prices stable or even increasing in the future.

20. House prices in most Canadian regions can be explained by economic fundamentals, but prices in Hamilton, Toronto, and Vancouver are currently well-above estimated attainable levels. Since 2000, house price developments in most metropolitan regions can be explained by robust income growth and a decline in mortgage interest rates. House prices have broadly increased in line with households’ borrowing capacity. However, since 2015, prices in Hamilton, Toronto, and Vancouver have deviated significantly from fundamentals. By the end of 2018, pricing gaps stood at around 50 percent for Toronto and Vancouver, and almost 60 percent for Hamilton.

21. The overvaluations currently observed in Hamilton, Toronto, and Vancouver are not unprecedented. In 2006, house prices in Calgary and Edmonton increased sharply above estimates of borrowing capacity. Pricing gaps normalized by 2012 due to a combination of moderate declines in house prices, strong household income growth, and a decline in interest rates. Looking ahead, housing markets in Hamilton, Toronto, and Vancouver are not likely to benefit from such significant declines in interest rates. This suggests that without very strong income growth, there is a risk of further price corrections in these markets.

23. If house prices rapidly reflect households’ ability to borrow, even well-intentioned policies that improve access to credit are likely to increase house prices and adversely impact affordability. Policy measures that increase households’ capacity to borrow—such as increasing the mortgage loan amortization period or subsidizing loans—will likely put additional upward pressure on prices. Indeed, for such measures to work, the supply of housing would need to be exceptionally (and unrealistically) elastic, even in the short run. As such, policy measures focused on increasing housing supply are needed to durably improve housing affordability over the long term.

Andrle and Plašil (2019) also develop the concept of “dynamic borrowing capacity”, where the future path of income and interest rates are reflected in household capacity to borrow, with emphasis on the financial stability.

The formula is labeled as “pricing”, rather than “valuation” due to differences between the static borrowing-capacity approach and the investment approach, see Andrle and Plašil (2019) for more details.

Should one assume that the down payment is, for simplicity, a constant fraction of income Dt = κYt the resulting estimate of the price of housing would be . Under this assumption, the estimated house price would be less elastic with respect to the mortgage rate and the estimated a would differ. Also, assuming each household saves a portion of its current income for R years results in a similar expression. Loan-to-income ceilings would have even larger effect, with PHt = LTImax × Yt + Dt when LTI limit is binding. With binding LTI limit, a reduction in interest rate would lead to decline in DSTI.

Adalid and Falagiarda (2018) illustrate in detail the delayed effects of new loan origination and loan repayment on the stock of credit.

This would be a natural result with non-homothetic preferences. For instance, with Stone-Geary utility over housing, H, and other goods, C, a minimum necessary consumption of other goods, C_min, the share of housing services on total income will increase with the income, Ph*H = alpha * (Y – Pc*C_min). It will be a constant share of the “after-necessities residual income”, (Y – Pc*Qc).

The attainable house prices estimate with uniform 30 percent DSTI assumption are in Figure 2 in the Appendix.

The analysis of supply-side factors in Canada is detailed in the 2018 Staff Report (IMF 2018).

Figure 2 in the Appendix presents the estimated “attainable” house prices from the SBC model under the common assumption of 30 % of after-tax median household income going to mortgage payments (at origination).

It is worthwhile noting here that exactly how house-price gaps ultimately adjust is highly uncertain, and can occur through changes in prices, changes in attainable prices, or some combination of both. 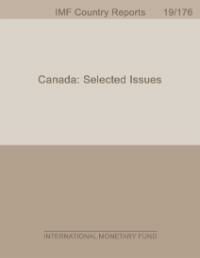 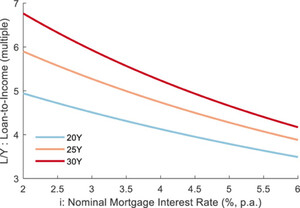 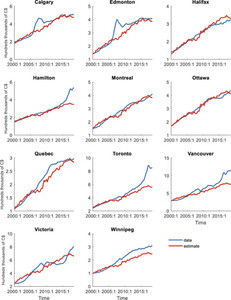 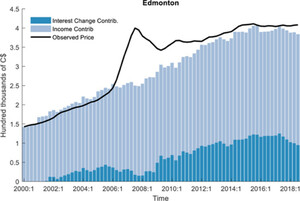 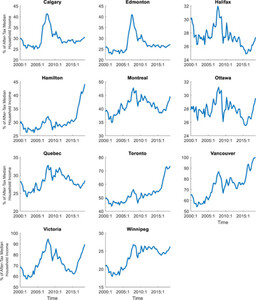 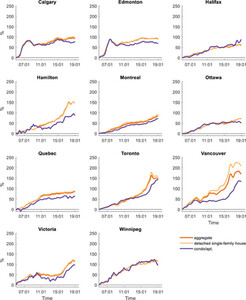 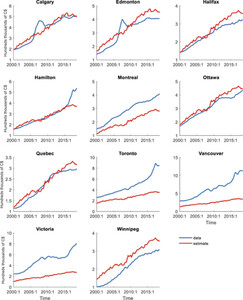