2019 ARTICLE IV CONSULTATION—PRESS RELEASE; STAFF REPORT; AND STATEMENT BY THE EXECUTIVE DIRECTOR FOR THE UNITED STATES

Under Article IV of the IMF’s Articles of Agreement, the IMF holds bilateral discussions with members, usually every year. In the context of the 2018 Article IV consultation with United States, the following documents have been released and are included in this package:

The U.S. economy is in the longest expansion in recorded history. Unemployment is at levels not seen since the late 1960s, real wages are rising, and inflationary pressures remain subdued. Economic activity, while still growing above potential, is expected to slow to around 2.6 percent this year and 1.9 percent in 2020.

Despite these positive macroeconomic outcomes, the benefits from this decade-long expansion have not been shared as widely as they could. A broader set of social indicators shows a troubling picture. Average life expectancy is falling, income and wealth polarization have increased, poverty has fallen but remains higher than in other advanced economies, social mobility has steadily eroded, and education and health outcomes are discouraging.

The financial system appears healthy but medium-term risks to financial stability are rising. More accommodative guidance by global central banks has supported a broad-based increase in asset prices and a compression in the market pricing of volatility. At the same time, vulnerabilities in leveraged corporates and, potentially, in the nonbank system are elevated by historical standards. There has been little institutional response to counter these growing risks.

An abrupt reversal of the recent supportive financial market conditions represents a material downside risk to the U.S., with spillover implications for other economies. A sudden tightening of financial conditions could interact with high levels of corporate and public debt, creating a feedback loop between financial conditions and real activity, with negative implications for financial stability. This would undoubtedly have negative outward spillovers for non-U.S. corporates, sovereigns and financial institutions, particularly those with significant leverage or rollover needs in U.S. dollars.

The U.S. public debt is on an unsustainable path. Policy adjustments are needed to lower the fiscal deficit and to put public debt on a gradual downward path over the medium term. There are a range of possible policy options, but any successful package will likely require steps to address the expected increases in entitlement spending on health and social security, to raise indirect taxes, and to institute a federal carbon tax.

Further increases in the federal funds rate should be deferred until there are greater signs of wage or price inflation than are currently evident. Faced with falling inflation, anchored inflation expectations, a flat trade-off between inflation and slack, and continued uncertainties around the global outlook, the balance of risks argues in favor of a pause to further changes in monetary policy. Such a pause will give policymakers time to gauge the balance of risks to both inflation and employment outcomes and to build a clearer picture of whether further adjustments in the federal funds rate are warranted.

Providing greater clarity, and a more holistic picture, of the expected evolution of the operating framework for monetary policy would be valuable. Operational changes could involve introducing a standing repo facility (to help cap spikes in money market rates); moving away from the federal funds rate as the operating target; and returning to a point target for the policy rate (rather than the current target range).

For the global economy to function well, it needs to be able to rely on a more open, more stable, and more transparent, rules-based international trade system. The U.S. and its trading partners should work constructively to better address distortions in the trading system that are partly rooted in the system’s inability to adapt to long-term changes in the international environment. It is especially important that the trade tensions between the U.S. and China—which represent a threat to the global outlook and create important negative spillovers to other countries—are quickly resolved through a comprehensive agreement that strengthens the international system.

The external position is judged to be moderately weaker than implied by medium-term fundamentals and desirable policies. The current account deficit is expected to rise modestly over the medium-term, moving it further away from the estimated current account norm. The real effective exchange rate remains somewhat overvalued. The combination of gradual fiscal consolidation, an improving oil balance, and supply-side reforms are necessary to lower the current account deficit (not through tariffs or other policy efforts aimed at reducing bilateral deficits).

The Western Hemisphere Department (in consultation with other departments) 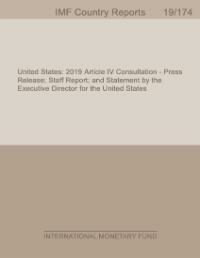