We thank staff for their continuing positive engagement with our authorities and their insightful Report and Selected Issues Papers. The Irish economy is at an unusual conjuncture – faced with significant risks from Brexit and global trade developments on the one hand, and potential excess expansion on the other. The authorities acknowledge the challenges in the coming years but, importantly, these are being met from a strong position. GDP increased by 6.7 percent last year and modified (final) domestic demand (MDD) – a more accurate measure of underlying economic activity in Ireland – increased by 4.5 percent. On the domestic front, a combination of strong growth in disposable income, improving consumer confidence and modest inflation underpinned personal consumer spending growth of 3 percent in 2018. The headline export performance recorded growth of almost 9 percent in the same period. This healthy growth is paying dividends in the labor market, where the number employed last year reached the highest level in history.

The current administration – a minority government in a multi-party coalition – has been in place since 2016, extending its coalition agreement to unite behind the national Brexit strategy and contingency plans. After a decade-long fiscal adjustment path, it faces numerous competing pent-up spending pressures, including public sector wage increases and current and capital spending demands. Nevertheless, the authorities are committed to implementing prudent budgetary policy and rebuilding buffers, to be in a position to provide support in the event of a downturn and / or “No-Deal Brexit.”

Ireland will be uniquely affected by Brexit, regardless of the ultimate arrangement. Reports commissioned by the authorities provide extensive analysis of the macroeconomic and trade impacts for Ireland. Compared to the UK remaining in the EU, GDP in Ireland is estimated to be c.2.6 percent lower after ten years in a “Deal” scenario, and 5 percent lower in a “Disorderly No-Deal” scenario.1

Whole-of-Government preparations have been taking place since before the Brexit referendum for many possible outcomes. These have developed into the Government’s Contingency Action Plan 2 – primarily for a “no-deal” scenario – which includes a planned fiscal response and the preparation of Brexit related legislation 3 to support the economy, enterprise and jobs, particularly in key economic sectors such as agriculture, food and transport. Several credit schemes aimed at the most vulnerable parts of the SME sector include a €300m Future Growth loan scheme to support long-term capital investment. In addition, the authorities have undertaken extensive financial sector contingency planning and collaborated with the EU and UK authorities as appropriate.

The authorities are committed to careful management of the public finances, while also providing for spending plans that enhance the productive capacity of the economy into the future. While compliance with EU fiscal rules has provided an anchor, the authorities have gone beyond those requirements to generate some additional fiscal space. The 2019 Stability Program Update projects a small surplus this year, followed by a larger surplus in 2020 in the baseline case. Transfers amounting to €500m each year from 2019-2023 are committed to the “Rainy Day Fund,” subject to the enactment of the necessary legislation this year. Nevertheless, the authorities acknowledge staff’s advice on the need to tackle spending overruns in the health sector.

While the debt-to-GDP ratio is projected at 61.1 percent in 2019 – close to the EU fiscal rule threshold of 60 percent – other metrics such as the ratio of debt-to GNI* 4 show that, while declining, public indebtedness remains quite high. The government’s fiscal strategy will further reduce public debt, via projected surpluses, receipts from the disposal of State ownership of banking assets, and the winding down of the National Asset Management Agency (NAMA). The latter is expected to generate a €4 billion surplus to the State in 2020-21.

The authorities welcome the results in the Selected Issues Paper on Personal Income Tax Reform: Past and Present. In particular they welcome the recognition of the overall high progressivity of Ireland’s current PIT system, which is recognised internationally as having played an important role in income redistribution and alleviation of poverty (combined with Ireland’s welfare benefits system), and which underpinned Ireland’s inclusive framework in the years of fiscal retrenchment in response to the financial crisis. The authorities also consider that the main conclusion of the paper – suggesting further reform of the income tax system – is helpful, albeit merits further detailed consideration. However, the authorities are less aligned with staff on the link drawn between the increase in CIT revenues and the funding of the reductions in personal income taxes.

The authorities continue to support and work towards an international, multilateral, cohesive and agreed approach to the international corporate tax environment. As a country with a small open economy, having a stable and consensus-based international tax framework is very important for Ireland, as it provides the necessary stability and certainty for investment decisions to be made. Ireland has been a strong proponent and implementor of BEPS and has taken significant steps to address aggressive tax planning, including amending tax residency rules, enhancing tax transparency and mandatory disclosure of tax planning arrangements by advisors. Indeed, Ireland achieved the highest standard for transparency under the BEPS framework.

Brexit-related applications and plans for authorization are significantly impacting the Irish financial sector landscape. The Central Bank of Ireland has implemented a vigorous authorization process, in collaboration with EU authorities, where applicable, and is committed to upholding the highest standards of regulation and supervision to protect financial stability, consumers and investors. While the final relocation of financial services to Ireland post-Brexit will not be in place for some time, the expectation is that Ireland will become the fourth largest financial services centre in Europe, although the number of systemically-important institutions will not markedly change.

The financial position of the Irish banks continued to improve, and the two main banks recorded profits for the fifth consecutive year. In addition, net loan books expanded for the first time since the financial crisis.

Progress on NPL reduction continued, following vigorous policy and structural actions over a number of years. The average NPL ratio of domestic banks fell from 13.8 percent to 8.5 percent in the year to December 2018, 88 percent below their 2013 peak. Mortgage NPLs (70 percent of all NPLs) fell 39 percent in the Irish banks year on year, aided by loan sales as well as work through measures. The authorities are aware that ongoing work is required to continue these reductions, while also noting that the oldest NPL segments are dominated by restructured loans not currently in arrears and with a larger share of collateralization than EU norms.

The Macroprudential Policies, introduced in 2014, represented a key structural improvement in the Irish policy framework. The mortgage lending limits are reviewed annually to ensure they continue to achieve the objective of protecting the economy from unsustainable credit growth; the 2018 review concluded that the rules, as calibrated, remain unchanged, while becoming more binding as property values rise. The CBI has set the countercyclical capital buffer (CCyB) at 1 percent effective from 1 July 2019 and has requested powers to introduce a systemic risk buffer.

Authorities welcome the Selected Issues Paper on the non-bank financial sector in Ireland. The Central Bank of Ireland has carried out extensive analysis to profile the many types of entity, business modes and activities of this sector, and the authorities welcome the Fund’s focus on this area. In particular, they appreciate staff’s focus on the non-bank activity and its potential interlinkages to the real economy (including non- bank investment in property and related assets), while agreeing with the conclusion that the employment and value-added linkages to the domestic economy remain weak.

The Financial Action Task Force (FATF) mutual evaluation report of Ireland in September 2017 acknowledged the strength of Ireland’s AML/CFT systems, the measures taken nationally on AML/CFT risks and the cooperation mechanisms developed thereon, while also making recommendations about the areas for further improvement. As part of the regular follow-up reporting, the authorities have submitted evidence for upgrades to compliance ratings on 13 of 40 FATF recommendations, based on the actions taken since 2017, which will be considered by FATF in October 2019. Accordingly, the authorities concur with the staff recommendation to continue to strengthen the AML/CFT regime and have many such measures underway. The 4th Directive has already been transposed into law while the 5 th AMLD is largely transposed 5 and the beneficial ownership of trusts provisions are on schedule to be transposed before their deadline. A central register of beneficial ownership for corporates – required under 5AMLD – is expected to go live shortly, well ahead of the January 2020 deadline, as is work on establishing a central mechanism for the retrieval of information on the beneficial ownership of bank accounts and safety deposit boxes.

Sustained macroeconomic and demographic growth, strong employment and incomes growth, combined with structural factors limiting housing supply led to significant house price recovery since the trough in prices in early 2013. Given the criticality of a supply-side response to the housing market, a comprehensive 5-pillar government housing supply strategy has been underway for several years, facilitating an annual average supply increase of over 30 percent in 2014 – 2018. In the private sector, reforms such as fast-track planning, new building guidelines and the creation of Home Building Finance Ireland (HBFI) are facilitating further investment, as noted by staff in Box 2 of the Report.

The increase in supply is integrated into improved spatial planning under the National Planning Framework (NPF), which guides strategic planning and development in Ireland over the next 20 years. The authorities are cognizant that further work is required in this area and are committed to ensuring that housing supply continues to meet the demands of the Irish population.

With the unemployment rate now at historical lows, employment demand is met by sustained immigration. Ireland is one of the most positively disposed countries in Europe towards immigration, with authorities viewing it as enhancing the productive capacity of the economy and fostering multiculturalism.

To foster enhanced female labor force participation, the recently introduced National Childcare Scheme is designed to address the impediment of high childcare costs to female workers. It establishes an equitable and progressive system of universal and income- related subsidies for children up to the age of 15, alongside supports for lifelong learning.

As noted by staff, Ireland is the only EU country with generally rising greenhouse gas emissions. In recognition of the need to step up action, and to ensure the delivery of Ireland’s 2030 targets, the government agreed in November 2018 to prepare a new all- of-Government Climate Plan. The Plan will build upon the existing National Mitigation Plan and aims to develop new initiatives across all sectors that contribute to reducing greenhouse gas emissions. The Irish government is committed to carbon pricing as a core element of its policy measures to reduce greenhouse gas emissions and signaled its intention, in the 2019 Budget Statement, to put in place a long-term plan (to 2030) for carbon tax increases, in line with recommendations of Ireland’s independent Climate Change Advisory Council and the special Oireachtas (Parliamentary) Committee on Climate Action. In May 2019, the government declared climate as a national emergency, to highlight its commitment to fiscal and other policies to address climate risks.

While the Irish economy continues to grow, the authorities are cognizant of the need to address the vulnerability to significant external risks of Brexit and global trade, on the one hand, and to protect the hard-won fiscal and structural reforms, on the other. Difficult trade-offs lie ahead. The authorities appreciate the useful policy advice contained in the Report as they navigate these choices.

In the Deal scenario, the UK makes an orderly agreed exit from the EU. This involves a transition period covering the years 2019 and 2020, and a free trade agreement between the UK and the EU27 thereafter. In the Disorderly No-Deal scenario, the UK exits the EU without a deal and there is an additional disruption to trade in the short run.

The Withdrawal of the United Kingdom from the European Union (Consequential Provisions) Act, which was signed into law by the President on 17 March 2019.

GNI* excludes the profits of re-domiciled companies, the depreciation of intellectual property and aircraft leasing companies 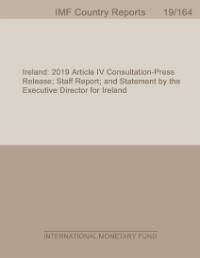