Vanuatu is a small developing state, consisting of 83 volcanic islands in the South Pacific. Tourism and agriculture are key drivers of economic activity, but distance from major markets and vulnerability to external shocks pose challenges to growth and development. Located on the earthquake-prone “ring of fire” and sitting at the center of the Pacific cyclone belt, Vanuatu experiences frequent natural disasters, including tropical cyclones, active volcanos and earthquakes, and is ranked as the most at-risk country in the world by the UN World Risk Index.

The economy has been growing strongly, boosted by spending on infrastructure and reconstruction projects following extensive damage caused by Cyclone Pam in 2015. The government has an ambitious development agenda aimed at developing urban and rural areas, improving living standards and delivering community services. As major infrastructure projects are completed, there is an increased focus on other drivers of medium-term growth, including initiatives to diversify and increase value added in agriculture and a cross-sector plan to develop air transport and tourism, the Shared Vision 2030.

The authorities largely agree with staff’s analysis and near-term outlook, and with the broad thrust of the advice. They thank staff for their thoughtful analysis and the open and collaborative approach taken by the team. Staff from the World Bank and Asian Development Bank were also invited to join relevant meetings, which allowed all involved to draw on each other’s expertise and make best use of the authorities’ time. The authorities value highly the advice and technical assistance received from the Fund and look forward to further constructive engagement in future.

The authorities are committed to maintaining fiscal discipline while making necessary investments in productive and social sectors to build economic growth.

Spending on projects to address infrastructure gaps and post-disaster reconstruction has increased in recent years. While this has been largely funded through grants and loans with a high concessional element, public and publicly guaranteed debt has increased to an elevated level. The government’s long-term fiscal objectives include maintaining a recurrent budget that is in surplus over the medium term and keeping nominal public and publicly guaranteed debt below 60 per cent of GDP (consistent with staff’s recommendation in 2018). The authorities note that staff projections show debt rising above this target in the medium term even with the domestic recurrent budget in surplus. They noted the need for additional revenue mobilization in the future, along with continued expenditure restraint and careful debt management. The authorities have taken the opportunity provided by strong growth in revenues from the economic citizenship program in 2019 to reduce debt where possible.

Significant process has been made in strengthening the debt management framework. Under the debt management strategy introduced in 2015, new loans must have a grant element of at least 35 per cent. The authorities are conscious of the need to plan and sequence projects, and new projects are required to have thorough and feasible plans to generate economic and financial returns in the medium term. Further improvements are being made to the debt management strategy, on-lending and guarantee policies and related financial regulations, drawing on assistance from development partners including the World Bank and Asian Development Bank.

Vanuatu continues to build resilience to natural disasters and climate change. This includes building fiscal policy buffers, ensuring an adequate level of international reserves, spending on resilient infrastructure and adequate maintenance. Between 2006 and 2016, Vanuatu developed a Disaster Risk Reduction and Disaster Management National Action Plan, as well as being the first Pacific Island country to have adopted both a National Adaptation Program of Action (2007) and National Action Plan for Climate Change Adaptation and Disaster Risk Reduction (2015). The new Disaster Risk Management Act 2018 aims to enhance engagement with provincial and municipal governments, support access to donor-funded disaster assistance and set up a national disaster fund. Securing access to donor-funded assistance is also needed. The authorities are discussing a development policy grant with a Catastrophe-Deferred Drawdown Option (CAT-DDO) with the World Bank which would provide immediate liquidity to the country in the aftermath of a natural disaster.

The Reserve Bank of Vanuatu’s (RBV) actions have continued to contain inflationary pressures. The exchange rate regime has worked well, providing the economy with the useful nominal anchor, while statutory reserve requirements and open market operations have been used to address domestic pressures. The RBV stands ready to adjust policy as economic conditions evolve. Excess liquidity in the banking sector poses a medium-term challenge for monetary policy implementation. A review of monetary policy instruments is underway and the staff team’s analysis of excess liquidity in the banking sector is useful in this context. As this is not a problem unique to Vanuatu, the authorities would see value in a regional analysis of drivers and policy responses for the next Article IV consultation.

Broadening access to credit is a priority, and the authorities look forward to further engagement with the Fund on this issue. The RBV is carefully monitoring the banking sector and welcomes the IMF banking sector diagnostic currently underway. Financial sector development is also being supported through stronger supervision, including the introduction of a new legal framework for credit unions and work underway with PFTAC assistance to review the RBV’s approach to risk-based supervision. The authorities are also progressing financial inclusion initiatives under the National Financial Inclusion Strategy 2018–23. While noting that fintech applications have a role in strengthening financial inclusion, the authorities are also conscious of the need to ensure that appropriate regulatory frameworks are in place.

Significant progress has been made in improving Vanuatu’s AML/CFT framework, resulting in Vanuatu’s removal from the FATF AML/CFT grey list in June 2018. While banks have been able to maintain correspondent banking relationships, these remain under pressures and compliance activities have increased costs. A substantial amount of work was needed to prepare and implement new AML/CFT legislation to enable Vanuatu’s removal from the grey list. In this context, the authorities expressed concern that Vanuatu’s recent inclusion on the European Union list of non-cooperative tax jurisdictions could undermine some of the work that has been done to support correspondent banking relationships. Work is underway to ensure that Vanuatu fulfils its international obligations in the area of taxation. Technical assistance is also valuable in this area given resource constraints; the authorities have engaged additional technical assistance under the Australian Governance for Growth project.

The authorities are committed to strong governance. Efforts underway include improving public financial management, through the Tax Administration Act, and the authorities are working with the ADB to improve the operation of Government Business Enterprises. Progress has been made in implementing the IMF Safeguards Assessment recommendations including strengthening the corporate governance structure, internal audit function and overall structure of the RBV. Ongoing IMF technical assistance in this area is appreciated. 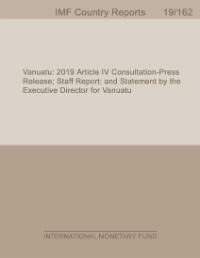