Samoa is one of the most vulnerable countries in the world to natural disasters and the effects of climate change. Samoa’s remoteness, narrow economic base and small population dispersed across four islands, adds to its development challenges and ability to fully integrate into the region. With the intensity and frequency of natural disasters increasing, the Samoan authorities face difficult trade-offs. The authorities are seeking to strike the right balance between much needed investment to deliver on Samoa’s development goals and increasing fiscal buffers to build resilience to natural disasters. Continuing concerns regarding the threat of withdrawal of Correspondent Banking Relationships (CBRs) only add to Samoa’s vulnerability and challenge financial inclusion objectives.

Authorities broadly agree with the staff’s assessment of the outlook and risks, although are slightly more optimistic on the outlook and see risks as more balanced. The economy is rebounding from a slowdown due to the closure of the Yazaki manufacturing plant and lower than expected growth in agriculture and fishing both from the impact of Cyclone Gita and changing weather patterns. Looking ahead, the authorities expect growth to be driven by some large construction projects and the effects of hosting the Pacific Games. On the upside the authorities see potential for the newly completed undersea cable to promote the IT/communications sector. The authorities also consider that new businesses have the potential to re-establish manufacturing in Samoa.

Authorities note staff’s assessment that the external position is broadly in line with fundamentals and that the level of reserves is considered adequate. Samoa’s pegged exchange rate remains appropriate and provides a welcome nominal anchor. Authorities will continue to closely monitor the reserves position which has continued to strengthen in recent months, being mindful that reserve adequacy is an important policy tool for natural disaster response.

Authorities are committed to rebuilding fiscal buffers, making progress on development objectives and ensuring fiscal sustainability. Samoa has made substantial efforts to consolidate the fiscal position since the last significant natural disaster in 2012, reducing the deficit from around 7 percent of GDP in 2011–12, to a surplus of 0.1 percent in 2017–18. Efforts to maintain a fiscally responsible stance will continue and the authorities will carefully consider the measures proposed by staff in the 2019–20 Budget context. Staff’s recommended range for the fiscal balance in last year’s staff report was ‘less than 2.0 percent of GDP’ to ensure debt is on a sustainable path. Staff’s current baseline projection is a deficit of 1.8 percent. In this year’s staff report the mission advised the authorities to target a fiscal deficit of 1.0 percent of GDP. Authorities note the increased precision of staff’s advice.

Debt to GDP has decreased from 58 percent in 2014–15 to 50.3 percent in 2017–18, slightly above the target of 50 percent in the Medium-Term Debt Strategy. Debt is transparently reported, with the Ministry of Finance publishing government debt statistics on its website every quarter. This report covers the currency and creditor composition of government debt and the lending terms. Authorities agree with staff’s recommendation to bring the debt-to-GDP target in the Medium-Term Debt Strategy down to 45 percent in the medium term given the risk of natural disasters and the need to ensure government finances remain on a sustainable footing.

Authorities are fully aware of the fiscal risks associated with public financial institutions and are continuing with reforms, including the establishment of a Debt Management Unit to help better manage fiscal risks. Cabinet recently agreed to strengthen procedures for issuing government guarantees to state owned enterprises and an on-lending policy is currently under review.

Samoa has a multi-pronged strategy for building resilience to natural disasters and climate change. This includes ensuring an adequate level of international reserves, building fiscal policy buffers and a contingency reserve as an expenditure item in the Budget. Further, the authorities are focusing on building infrastructure ‘back better’ such that it is more resilient to natural disasters and putting in place a multilayered contingent financing strategy. The financing strategy identifies financing available from international financial institutions and development partners, access conditions and the speed of disbursement to ensure that the authorities can respond swiftly in the event of a natural disaster. Samoan authorities are keen to see how a Climate Change Policy Assessment (CCPA) could further support their efforts to build resilience to natural disasters and seek the Board’s support.

Samoan authorities look forward to the completion of the LIC Facilities Review and urge the membership to consider increases to access limits for the Fund’s facilities that help members respond to natural disaster related shocks. Staff assess that major natural disasters hit Samoa on average every 5 years. The last major disaster was in 2012 and Samoa drew on the IMF’s Rapid Credit Facility (RCF) at that time. While the authorities continue to make the required repayments, given the frequency with which Samoa experiences natural disasters, Samoa would only be able to access around 35 percent of quota given current cumulative access limits. Samoan authorities also encourage Staff to explore ways to increase the speed of disbursements available under the RCF. The recent experience in Mozambique sets a new benchmark in this regard.

Staff’s assessment is that Samoa is still far from losing access to CBRs. But this assessment risks understating the fragility of the situation and the impact that losing remittance channels would have on social structures, financial inclusion and responsiveness to natural disasters. More Samoans live in Australia and New Zealand than in Samoa – so it is no surprise that the Samoan economy is heavily reliant on the flow of remittances. Remittances comprise 20 percent of GDP. Sons and daughters remit part of their income back to Samoa to support family structures. Given both the limited interaction that most Samoans have with the formal financial sector and the cost of transfers through traditional banking channels, flows of remittances tend to be received through Money Transfer Operators (MTOs). Remittance flows increase rapidly in response to a natural disaster and are often the first form of financial assistance that Samoans receive.

As the Samoan authorities spend significant resources to continue to strengthen AML/CFT frameworks, Money Transfer Operators report that they continue to have their bank accounts closed without warning. The closure of Money Transfer Operators (MTOs) remains a risk to low-cost remittances in the Pacific and significant remittance costs threatens financial inclusion. While the withdrawal of CBRs has not yet had a visible impact on the overall flows of remittances, authorities remain extremely concerned with the uncertainty of the situation and the implications for financial inclusion as MTOs in local villages on remote islands close. Fees charged for remittances in the Pacific are already some of the highest in the world and well above the G20 objective of 5 percent. A centralized database to facilitate customer identification requirements remains an expensive prospect that does not ensure CBRs remain intact. The authorities remain open to a regional solution and urge the IMF to continue to consider all options. Authorities’ thank the IMF for the convening role they have played to elevate the status of this issue and greatly appreciate recent initiatives such as the Pacific Roundtable.

Staff note the high-risk rating of the offshore financial centre (OFC) in the 2014 National Risk Assessment. Actions have been taken since 2014 to reduce the risk profile of the offshore centre and to align to international standards. Samoa amended its tax legislation to align with international standards as well as other international finance legislation in 2013, 2014, 2015, 2016 and 2017. These changes also incorporate the necessary provisions to reflect the new standard set by the OECD’s Global Forum on Transparency and Exchange of Information for Tax Purposes. Samoa completed the ‘Automatic Exchange of Information for Tax Purposes’ in 2018.

Samoa has also recently incorporated the new standard for the regulation of trust company service providers into the Trustee Companies Act 2017 and introduced a new quarterly on-site supervision program to mitigate risks. More specifically the Trustee Companies Act 2017 (TCA) reinforces AML requirements on Trust Company Service Providers (TCSPs) including identification, verification and beneficial ownership information for International Business Corporations (IBCs). The current compliance rate for the provision of Beneficial Ownership (BO) information by the 6.0 percent of IBCs already covered by onsite supervision is 98.0 percent. Further, the TCA Act requires relationships with third parties to be in-line with current AML legislation that adheres to FATF standards. The Samoan authorities believe that the statement in the report “since Samoa TCSPs rely heavily on foreign intermediaries to conduct customer due diligence” needs to be qualified.

Samoa has always been a willing member in the global fight against money laundering and terrorism financing, including adopting the global standards to combat them. Samoa is a member of the Asia Pacific Group on Money Laundering (APG), the regional arm of FATF responsible for ensuring compliance by countries in the Asia Pacific region. The FATF develops a list of high-risk jurisdictions with AML/CFT deficiencies as part of a careful and comprehensive process. Because of the FATF’s work, virtually all countries around the world are subject to a rigorous peer-review methodology that examines the legal frameworks to counter illicit finance as well as how effectively countries implement them. These reviews are an intensive process involving careful review of the legal framework, extensive fact-gathering, and onsite visits in which assessors engage in robust, iterative dialogues with assessed countries. Samoa as an APG member actively engages in this process.

Samoa successfully completed a review in 2014–2015 by the Asia Pacific Group (APG) on Anti-Money Laundering and Counter Terrorism Financing against the 2012 FATF standards. Samoa recently amended its Anti-Money laundering legislation last year to improve its compliance with the FATF standards. As a result, in the APG Annual Plenary in July 2018, Samoa was given upgrades on 3 key recommendations and was placed in the category of countries that requires reporting to APG every 12 months instead of every 6 months. Samoa does not appear on any OECD or FATF black lists.

Samoa is disappointed it has recently been included on a draft European Union AML list, alongside its inclusion on the European Union black list of non-cooperative tax jurisdictions. In regard to the EU blacklist for non-cooperative tax jurisdictions, Samoa actively responded and cooperated with the EU while continuing to meet its obligations under the international standards. Samoa has also given the EU assurances of Samoa’s commitment to maintain its endeavours to remain internationally responsible, and compliant. Regarding the recent draft AML list, Samoa is disappointed that they have not been provided with any detailed reasons for their inclusion on the blacklist, that they were provided notification that they would be included on the list only days before it was issued and that they were not provided a meaningful opportunity to challenge their inclusion, or otherwise address the issues identified. Since the listings, Samoa has maintained an open dialogue with the EU and hopes to find a constructive way forward to addressing and resolving this listing.

Finally, the Samoan authorities would like to thank development partners for their continued support and the mission team, led by Mr. Giovanni Ganelli, for the candid and constructive discussions they have had during the Article IV consultation. The authorities regret the high frequency of Mission Chief turnover that they experience, especially given that their particular risks, vulnerabilities and unique operating context takes some time to navigate. Nonetheless, the authorities value highly the advice and technical assistance received from the Fund and look forward to further constructive engagement in future. 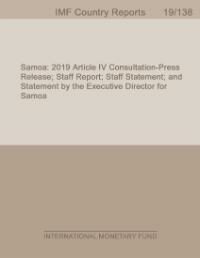