Industrial Structure and ITS Macroeconomic Implications in Korea1

1. After a remarkable growth spurt over several decades averaging above 6 percent, Korea’s economic growth has been slowing significantly for the last two decades. The growth rate declined to 4.3 percent in 2000s, and to 2.8 percent in 2010s. The volatility of growth has also declined since the 2000s, which is commonly observed in the advanced countries with economic development, such as “Great Moderation” during the 2000s in the U.S. (e.g., Blanchard and Simon, 2001; Kim and Nelson, 1999; Stock and Watson, 2003). Although in the long run economic growth and stability can be determined by various structural factors including population aging and development stages, the development path of Korea’s industrial structure can also play an important role.

2. Korean economy has become more concentrated and interconnected through the 2000s. The economy has become more concentrated in a few manufacturing industries, while interconnectedness across industries has risen via vertical relationships. At the same time, the importance of international trade has increased with a growing participation in global value chains (GVCs). The rise of economic concentration and interconnectedness could become the sources of macroeconomic instability as macroeconomic fluctuations are primarily the results of many microeconomic shocks at the sectoral or firm-level (e.g., Gabaix, 2011; Carvalho and Gabaix, 2013; Foerster et al., 2011).2 In addition, Acemoglu et al. (2017) show how tail macroeconomic risks can be created from the propagation of microeconomic shocks through the input-output network. In this regard, the recent decline in GDP volatility does not necessarily secure the economic stability in the future. Against this background, this paper attempts to shed light on the role of industrial structure in determining Korea’s economic growth and stability.

3. The structure of this paper is as follows. In Section B, we present overall industrial structure of the Korean economy and its changes over time using the data at the sector-level and industry-level, while the macroeconomic developments in the sectoral and industrial levels will be described in the following Section C. Section D explores the implications of structural changes in industrial structure for economic growth and stability. Specifically, we empirically examine the role of vertical and trade linkages, through which the economic shocks can be propagated, in determining productivity growth. Section E concludes and discusses policy implications.

B. Industrial Structure: Concentration and Interconnectedness3

5. The manufacturing sector is highly concentrated in a few key industries while services are not much concentrated. Korea’s industrial structure has followed a U-shaped relationship between economic development and diversification in manufacturing, but this relationship is not found in services.4 As the economy develops, the manufacturing sector first diversifies and it starts specializing relatively late stages of economic development: that is, the share of the three largest industries has declined to 41.9 percent in 1990s, but it has increased to 57.6 percent in 2010s.5 However, in services the share of top three industries has declined over several decades, reaching at 39.5 percent in 2010s.6

9. At the industry-level, major manufacturing industries have shown a sharp increase in export and import linkages after the GFC. Electronics and transportation show about twice higher export linkages than chemicals while import linkages are highest in electronics.

14. The potential factors of economic instability may be embedded in the Korean economy despite the recent decline of overall growth volatility. At the industry level, electronic and transportation—the two largest share manufacturing industries through the 2000s—have been relatively volatile compared to other manufacturing and service industries. Domestic or external shocks can be easily transmitted to the whole economy due to Korea’s industrial structure of high concentration and interconnectedness around a few major industries which are relatively volatile and also are dominated by a few large firms.11

17. Domestic industry shocks and external country shocks can be propagated through upstream/downstream linkages and export/import linkages. For external shocks, we focus on the transmission of GDP growth shocks from Korea’s three largest trading partners (China, the U.S., and Japan). We examine the transmission of domestic and external growth shocks on industry’s labor productivity growth which may have important implications for Korea’s long-term economic growth. The estimation equation is set up as:

18. Industry growth is estimated to be significantly affected by both downstream domestic industry shocks and own export shocks (Table 1). The estimation results on Equation (1) show that: (i) supply-side domestic industry shocks have larger downstream effects (due to supplier shocks) than upstream effects (due to customer shocks)—industries are more likely to be affected by seller’s growth shocks rather than buyer’s growth shocks; 13 and (ii) external country shocks are propagated to domestic industries mainly through its own (direct) export linkages—industries being highly involved in exports directly to foreign countries are significantly affected by the country’s growth shock.14 Separate estimation for manufacturing industries demonstrates that the propagation of domestic industry shocks via both upstream and downstream linkages is significant while the external shock propagation via direct export linkages is also effective. Other control variables have expected signs: that is, lower productivity industries have a higher growth (i.e., convergence or catch-up) while industries with higher capital intensity growth are growing faster.

19. The estimated average productivity growth impacts from domestic industry shocks and external country shocks are non-negligible. First, the left panel chart shows the average impact of domestic and external shocks on productivity growth of total industry. For domestic industry shocks, growth shocks in chemicals (one standard deviation) are estimated to have the largest productivity impacts (0.52 percentage point) mainly due to its high vertical linkages to other industries and high volatility, while growth shocks in electronics and transportation are also expected to have substantial productivity impacts. For external country shocks, China’s growth shocks would have the largest productivity impacts for total industry (0.26 percentage point) as the Korean economy is most highly linked to China via trade linkages, while growth shocks in the U.S. and Japan would have smaller but substantial productivity impacts. Second, the right panel chart illustrates the average impact of domestic and external shocks on productivity growth of manufacturing industry. The relative size of productivity impact is consistent with the results for total industry, while the effects are expected to be larger than twice for manufacturing which is highly interconnected with other industries via vertical linkages and with foreign countries via trade linkages. Lastly, the overall impact of each one standard deviation domestic and external shocks is estimated to 1.4 percentage points for total industry and 3.2 percentage points for manufacturing. The estimates highlight that the economic shocks in the largest three industries and/or in the top three trading partners can lead to large swings in the overall economy by the transmission of shocks through vertical and trade linkages.

20. The growth shocks in the top five manufacturing industries are propagated to other Korean industries mainly through downstream effects (Table 2). However, the propagation via direct export linkages are estimated to be insignificant but the sign and magnitude are broadly consistent with the baseline results. The finding confirms that the French firm-level findings of di Giovanni et al. (2017) apply to the Korean economy at the industry-level: that is, the small number of large industries exhibit higher trade and vertical linkages and significantly contribute to the transmission of domestic and external shocks.

22. Specialization in a few key industries has increased the exposure of the economy to domestic and external shocks in Korea. The electrical and electronic equipment industry has contributed almost half of the growth in the manufacturing sector since early 2000s. The dominant industries are highly interconnected with other domestic industries via upstream/downstream linkages and with foreign markets via export/import linkages. Moreover, these industries are dominated by a few large firms.

23. The empirical analysis suggests that tighter vertical and trade linkages have increased the vulnerability of the economy to domestic and external shocks. The estimation results show that: (i) domestic industry shocks have larger downstream effects than upstream effects; and (ii) external country shocks are propagated to Korean industries mainly through direct export linkages. Moreover, the overall impact of each one standard deviation shocks in the largest three industries and/or in the top three trading partners is estimated to be 1.4 percentage points for total industry and 3.2 percentage points for manufacturing. This highlights that the economic shocks in a few large manufacturing industries and/or in major trading partners can lead to large swings in the overall economy by the transmission of shocks through vertical and trade linkages. The findings imply that diversification of industrial structure would help mitigate the macroeconomic instability from the propagation of economic shocks.

24. Moreover, high trade linkages to China and the U.S. may lead to the Korean economy to be vulnerable to the unfavorable economic episodes in these countries. For instance, given high trade linkages to these countries, the recent trade tensions between China and the U.S. are expected to have significant impacts on the economic growth and stability in Korea. Therefore, further efforts are needed to mitigate a concentrated economic structure, which may include promoting fair competition between large corporations and smaller firms, fostering innovation especially in SMEs, and reducing the regulatory burden on firms, especially in the service sector.

Prepared by Dongyeol Lee (APD). The author is particularly grateful to Tarhan Feyzioglu (APD) and Johanna Schauer (SPR) for their invaluable discussions and comments.

It should be noted that specialization may also generate higher productivity through economies of scale and selection leading to the growth of productive firms/industries, which has arguably been at play in Korea over several decades.

In this section, we use both sector-level and industry-level data from national accounts (1970–2017), and World Input-Output Database (WIOD) (2000–2014) to study the overall industrial structure of the Korean economy and its changes over time.

The hump or U-shaped relationship of economic development and diversification (or specialization) is generally observed in many advanced economies (e.g., Imbs and Wacziarg, 2003; Cadot et al., 2011).

Wholesale and retail trade, real estate, public administration and defense, and education have been the three largest share industries in services.

Upstream (downstream) linkage is defined as the share of intermediate input supply (use) in sectoral or industrial output, which measures the intensity of connectedness to other industries as upstream sellers (downstream buyers).

Export (import) linkage is measured as the share of gross export (import) to (from) other countries in sectoral or industrial output.

The substantial increase in trade linkages to China over the 2000s may relate to the growing emergence of China’s presence in the global economy, especially after China joined the World Trade Organization (WTO) in 2001.

This paper considers only direct (first-order) trade and vertical linkages between Korea and other countries as well as between two industries, as in the existing literature (e.g., di Giovanni and Levchenko 2010; di Giovanni et al. 2018). For simplicity and empirical identification purposes, we assume indirect (higher-order) effects are not likely to be large empirically, although Acemoglu et al. (2016a) and other network literature introduce both direct and indirect trade and/or vertical linkages using a Leontief inverse matrix.

This result may relate to the important role of intermediate input export in productivity growth (e.g., Kasahara and Rodrigue, 2008; Keller, 2002; Lee, 2019).

Impact of Domestic and External Shock on Productivity: Total Industry

Impact of Domestic and External Shock on Productivity: Manufacturing 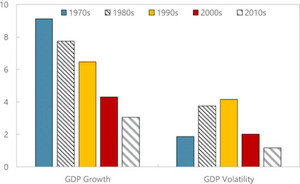 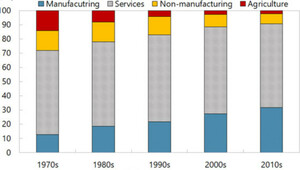 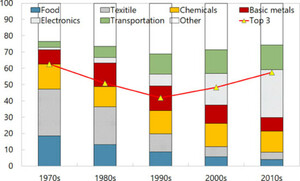 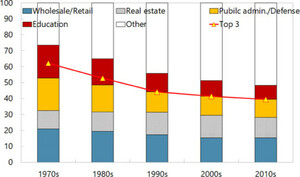 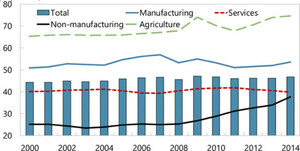 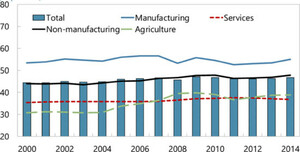 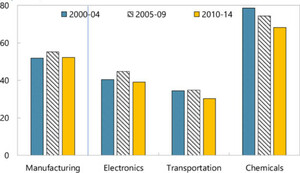 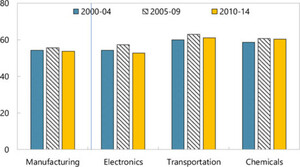 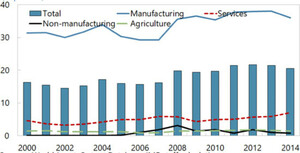 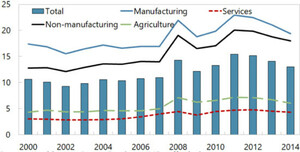 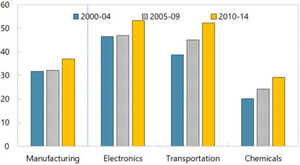 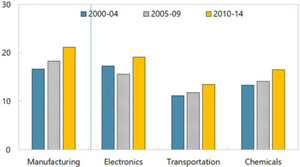 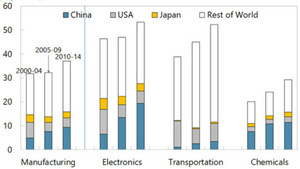 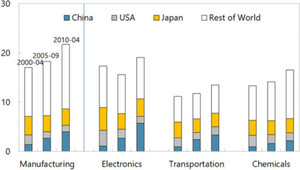 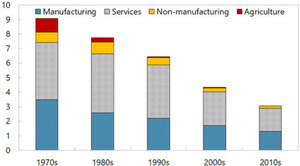 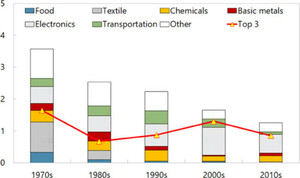 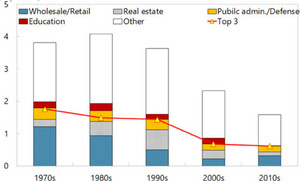 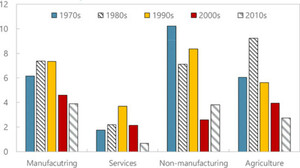 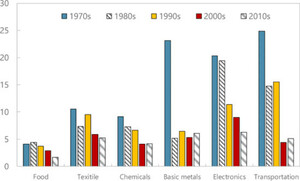 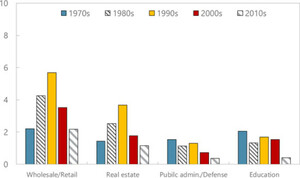 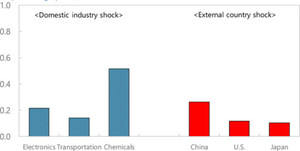 Powered by PubFactory
Close
Table A.2.