Our authorities continue to value Fund engagement and thank staff for the constructive policy discussions during the 2019 Article IV mission in Kampala. They welcome staff’s objective view of the country’s macroeconomic policies and challenges and broadly agree with the assessment.

The Ugandan economy continues to show strong performance underpinned by sound macroeconomic policies, which have enabled strong growth and improved market confidence. However, more effort is required to make further progress on poverty reduction and achieve the Sustainable Development Goals (SDGs). Further, although growth prospects are positive, they remain subject to substantial risks and vulnerabilities. To this end, the authorities are taking steps to ensure strong macroeconomic policies and address structural bottlenecks to improve economic resilience as reflected in the second National Development Plan (NDP II 2015/16 -2019/20). The NDPII seeks to strengthen Uganda’s competitiveness for sustainable wealth creation, employment and inclusive growth.

Real GDP growth accelerated from 3.9 percent in FY2016/17 to 6.1 percent in FY2017/18 largely underpinned by increased private sector activity, significant growth in the services sector, and recovery in the agricultural sector due to good weather and supportive government interventions. In FY2018/19, the economy is expected to grow at 6 – 6.5 percent, with growth close to potential, supported by improved agricultural production, strong pick up in private investment and consumption, as well as public investment, particularly in preparation for future oil production.

The current account deficit increased to 6.1 percent of GDP in FY2017/18, largely due to increased imports of capital goods related to infrastructure projects and private sector investments, which outweighed the growth in exports. The international reserves stood at 4.5 months of future imports of goods and services as at end March 2019.

Annual headline inflation edged upwards during the first half of FY2018/19, registering a 6-month average of 3.1 percent compared to 2.1 percent in the last half of FY2017/18. Annual core inflation also increased to a 3.3 percent average in the first half of 2018/19 from 1.6 percent in the last half of FY2017/18. In March 2019, annual headline inflation remained unchanged from February 2019 at 3 percent, while core inflation rose from 3.7 percent in February 2019 to 4.6 percent in March 2019, approaching the Bank of Uganda (BOU)’s medium-term target of 5 percent, driven mainly by other goods and services inflation. The low headline inflation reflects declining food, energy, fuel and utilities prices. At its April 2019 meeting, the Monetary Policy Committee (MPC) considered that inflation had developed in line with expectations and concluded that the current policy stance remained appropriate. As a result, the MPC kept the Central Bank Rate (CBR) on hold, consistent with its policy stance of maintaining price stability while supporting economic growth.

Consistent with the objective to maintain stable macroeconomic conditions, which are necessary for achieving sustainable and inclusive growth, our authorities are prioritizing higher public investment outcomes, by improving efficiency in public investment, strengthening domestic revenue mobilization efforts, and maintaining low and stable inflation, while creating opportunities for private sector development and job creation. Supported by the 5-year medium-term budget under the theme ‘Industrialization for Job Creation and Shared Prosperity’, the authorities are pursuing a number of revenue enhancement and expenditure rationalization measures.

On the revenue side, concerted policy efforts are being made to enhance the capacity of the revenue administration, improve transparency and accountability in the tax system, and enhance tax payer services, education and information. In addition, with the help of development partners, the authorities are finalizing their medium-term Domestic Revenue Mobilization Strategy (DRMS), which aims to increase revenue by 2.5 percent of GDP over five years. Domestic revenue collections for the first two quarters of the FY2018/19 exceeded set targets, owing to good performance in income taxes, increased import volumes and improved taxpayer compliance. In FY2019/20, the authorities expect to collect higher tax revenues through various measures, including property tax and the use of digital tax stamps.

Public expenditure is expected to be largely driven by development spending as the Government continues to invest in public infrastructure projects with high growth pay-offs. Completion of on-going infrastructure projects, such as the hydro power projects in FY2019/20, is expected to gradually narrow the overall deficit towards the macroeconomic convergence criteria of 3 percent, set under East African Monetary Union. The government also plans to protect priority social spending and, in collaboration with development partners, improve social outcomes.

The authorities are committed to maintaining the country’s debt at low risk of debt distress. As at end June 2018, the total public debt stock stood at 41 percent of GDP. This is likely to rise as more debt is incurred to finance government infrastructure projects but will decline in the medium term as the Government completes the investment priorities under the NDP II. In line with the Public Financial Management (PFM) Act, a medium-term debt strategy (MTDS), which provides the benchmark and thresholds within which the government acquires debt, has been developed. The authorities plan to keep debt below or as close as possible to the 50 percent of GDP target under the Charter of Fiscal Responsibility (CFR). Additional measures are also being taken to improve export earnings, improve the sequencing and execution of projects for timely realization of returns and impact on the economy. This will help increase domestic revenues and reduce the reliance on debt.

At the same time, the authorities are strengthening their public financial and investment management practices. In this regard, improved guidelines for planning and costing public investment projects have been introduced and the execution rate of infrastructure projects has improved over the last year. In addition, progress has been made on the management of domestic arrears with a view to improve monitoring and avoid further accumulation of arrears. A domestic arrears’ strategy has been developed and verification of all outstanding arrears by an external audit firm has been undertaken with a view to clear them. The authorities have also started the ascension process to the Extractive Industries Transparency Initiative (EITI).

The inflation targeting framework has been successful in keeping inflation low and stable, consistent with the BOU’s medium-term inflation target of 5 percent. Further, the BOU remains committed to maintaining a flexible exchange rate regime.

In 2018, the banking sector performance continued to strengthen, underpinned by a recovery in credit growth and improvements in asset quality. The non-performing loans (NPLs) ratio declined from 5.6 percent at the end of 2017 to 3.4 percent at the end 2018. The BOU also continued to strengthen its prudential oversight and regulations to preserve financial sector stability. In this regard, the International Financial Reporting Standard 9 (IFRS 9), to which all banking institutions are mandated to comply, took effect in January 2018 and the new financial institutions capital adequacy regulations took effect in September 2018.

Efforts by the BOU to promote financial inclusion, including developing financial consumer protection guidelines and undertaking financial literacy campaigns, have been successful. However, around 15 percent of the population still has no access to financial services. The 2017–2022 National Financial Inclusion Strategy, which aims to develop credit infrastructure and promote formal savings, investment and insurance instruments, is expected to further improve inclusion. Meanwhile, financial innovation continues to grow through agent banking, mobile money banking, and Islamic banking. A National Payments System Bill, which includes proposed enhancements to the regulations on mobile money, is in the process of being enacted. The authorities have made progress in implementing some of the recommendations of the 2018 Financial Sector Stability Review (FSSR), with support from the Fund. Implementation of other recommendations awaits legislative approval.

The authorities continue to make progress on the implementation of structural reforms. Their strategy includes enhancing private sector development, promoting human capital development, strengthening public sector investment, and improving governance while sustaining security. In this regard, efforts are being made towards addressing constraints faced by the private sector, developing industrial parks, completing key infrastructure projects and enhancing the contribution of the services sector, with a special focus on tourism and ICT sectors.

Unemployment remains a major challenge in Uganda, especially considering the fast growing and youthful population. The government is designing various programs targeting youth and women, including the development of a youth fund and industrialization programs to support job creation. To this end, skilling and the provision of relevant education programs remain a priority for the government. Consistent with the NDP II, industrial parks are being developed, with five industrial parks already in operation, creating job opportunities and increased use of local raw materials.

With respect to infrastructure development, a number of projects are underway including Isimba dam power project, commissioned in March 2019 and the Karuma dam power project, which is set to be completed at the end of 2019. These two projects are expected to increase the country’s power generation capacity by 783MW. Other infrastructure projects include the Kampala-Entebbe express highway, major roads and bridges construction and the expansion of the Entebbe International Airport. In addition, the national airline, expected to become operational in June 2019, will start with regional flights. This will help enhance competitiveness by easing connectivity to and from Uganda and support the growth of some sectors of the economy such as tourism, minerals, and oil and gas.

The authorities remain committed to strengthening governance and anti-corruption initiatives. Relatedly, they are advancing work towards aligning the AML/CFT regime with international standards to ensure compliance with the FATF requirements, following Uganda’s removal from FATF’s grey list in 2017.

Our authorities remain committed to maintaining macroeconomic stability to support inclusive and sustainable growth. They appreciate the Fund’s policy support, which has been instrumental in achieving economic stability while supporting durable and inclusive growth. Further, they welcome the enormous analytical work and capacity building support provided by the Fund in strengthening the fiscal framework, developing capacity for effective management of oil revenues, tax policy and revenue administration, public financial and investment management, strengthening the inflation targeting framework, and enhancing financial supervision and regulation. They look forward to further engagement with the Fund. 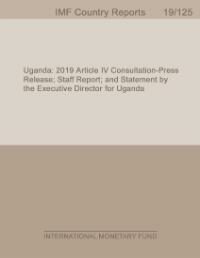