Education and health outcomes in Nigeria are among the weakest worldwide and are deteriorating in some parts of the country. Access to education is highly unequal across states and individuals’ income and gender. Regional differences in health outcomes are vast. Estimations from a micro-founded general equilibrium model suggest that narrowing gaps in education between boys and girls and between individuals at different parts of the income distribution would boost productivity, decrease income inequality, and narrow gender gaps in labor force participation rates and earnings. Closing the gender gap in years of schooling in each income quintile alone would boost long-term GDP by 5 percent, with much higher effects for more ambitious scenarios that also include anti-discrimination policies. Improving health outcomes, in particular for children, will support education outcomes and boost productivity of the labor force. Increased and regular funding for the education and health sector will be critical for supporting a range of reforms that includes all tiers of government.

1. Building human capital to boost the work force’s productivity will be essential to reap Nigeria’s demographic dividend. Nigeria’s population is growing at more than 2½ percent annually and its youth accounts for more than half of the population. This presents tremendous opportunities. However, a larger population will also add pressure on public services and infrastructure, which are already under considerable strain, with Nigeria already hosting the largest number of out-of-school children worldwide and contributing 12 percent to the global under-five mortality. Experiences from other countries suggest that declining dependency ratios (increasing the ratio of the population of working age to those too young or too old to be in the labor market), provide an opportunity for a demographic dividend. To reap this dividend, however, investments in human capital need to increase to allow workers to enter into the labor market at higher wages and higher productivity employment (CR/18/64).

2. In this context, this paper provides an overview of developments in health and education in Nigeria and their implications for the macroeconomy and offers policy options. In particular, it first provides an overview of the state of human capital and access to health and education services in Nigeria and simulates the impact of a range of policies to close gaps in education on GDP, inequality of gender and income, and other labor market outcomes. After giving a summary of ongoing government initiatives, it offers a few policy options.

3. Indicators of human capital development in Nigeria paint a worrisome picture. According to the World Bank’s 2018 Human Capital Index, capturing the level and quality of education as well as health outcomes, Nigeria ranks among the bottom six countries worldwide. For the second year in a row, it also ranks last on Oxfam’s Commitment to Reducing Inequality Index, to a large extent driven by the country’s low social spending. Spending on education, at 1.7 percent of GDP, is well below the 4.7 percent average in sub-Saharan Africa.

4. Health outcomes are poor, on average among the worst worldwide, with large variations across states (Figure 3). One in nine children dies before their fifth birthday in Nigeria (Figure 3, panel 1)—750,000 deaths each year—mostly from preventable and treatable causes. Almost one in five children in the poorest income quintile die before the age of five—twice the rate in Ghana and Senegal. About half of children this age suffer from stunting, one in three children suffers from chronic malnutrition. Malnutrition, in turn leads to slower brain and cognitive development, with some estimates implying a loss of two to three years of schooling, weaker school performance, lowered productivity in adulthood, and annual losses of GDP of 11 percent in Asia and Africa. Nigeria has the largest number of unimmunized children worldwide. Its maternal mortality is second highest globally (8 maternal deaths per 1,000 live births).

5. These averages mask wide variations and extreme outcomes in some regions of the country. For instance, every fifth child dies before reaching the age of 5 in Jigawa, Kano and Zamfara state (Figure 3, panel 3). More than half of children suffer from stunting in most North-Western states but also in Yobe in the North East (Figure 3, panel 4). Fewer than 20 percent of children are being immunized in some North-Western states, and full immunization is below 20 percent in Katsina, Kebbi and Zamfara states (Figure 3, panel 5). A woman in the North East is 10 times more likely to die related to childbirth than a woman in the South West.

6. Low spending on health and irregular release of funds complicate the implementation of necessary initiatives. At 0.6 percent of GDP, Nigeria’s health spending is comparable to that in conflict affected countries, such as Afghanistan, the Central African Republic and Yemen, and insufficient to address the sector’s vast challenges. In 2016, health expenditures accounted for only 7.1, 4.2 and 3.8 percent of budgets at the federal, state and local level, respectively. Funds are released irregularly and often with a significant lag, complicating the implementation of projects, and the utilization of funds. In 2016, e.g., only 64 percent of the health capital budget was released and only 54 percent subsequently used. Implementation of the Government’s Second National Strategic Health and Development Plan is estimated to require funding of N4.3 to 7.3 trillion between 2018 and 2022 in different scenarios, a multiple of current spending in the sector (NSHDP II 2019).

7. Quality issues in the education sector are impeding effective accumulation of human capital, and educational attainment varies strongly across states (Figure 4). The average Nigerian spends more than 8 years in school (Figure 4, panel 1) but there are substantial issues in the quality of education, halving the effective level of schooling. For instance, only 24 and 31 percent of teachers are able to score at least 80 percent on a 4th grade test in the language and mathematics curriculum, respectively, and four out of five persons that are 15 to 24 years old are not able to read a full sentence (World Bank 2018).

8. National averages are masking vast differences in educational attainment across states and the impact of conflict poses a major concern. Depending on the state, education can be almost universal (Lagos) or most of kids can be out of school (Bauchi) (Figure 5, panel 3). States’ priority spending varies widely, with just around Naira 5,000 spent per person on education, health and public administration in Katsina and Sokoto, but more than Naira 44,000 in Bayelsa. The Ministry of Education reports that, over the past nine years, almost 2,300 teachers have been killed and 19,000 displaced in Borno, Yobe and Adamawa state, and, since 2014, an estimated 1,500 schools have been destroyed. More than half of children in the Northeast have never attended school.

9. Access to education also varies strongly across individuals’ incomes and gender (Figure 5). Among the 20 percent of the poorest in Nigeria, a child’s probability to be out of school is more than 70 percent; it is 2 percent for the richest quintile (Figure 5, panel 1), contributing to Nigeria’s high number of out-of-school children (a minimum of 10 million children). Literacy rates also vary strongly across income quintiles, with additional large gender gaps: in the bottom quintile, only one in ten women is literate, compared to one in three men. These gender gaps narrow with higher income, and are virtually closed for the richest 20 percent, with average years of education similar for men and women at that level (Figure 5, panels 2 and 3). The probability of completing upper-secondary education is particularly low for poor girls: 1 percent for the bottom quintile and 6 percent for the second quintile (Figure 5, panel 4).

10. The above difficulties in health and education without doubt pose large development challenges and have macroeconomic implications. Improving health and education outcomes are development goals in themselves and part of the Sustainable Development Goals. In addition, a healthier and more educated labor force is more productive, yielding significant boosts for output and growth. While estimating the gains from improvements in health outcomes is beyond the scope of this paper, this section aims at providing gains from closing gaps in education based on a number of scenarios.

11. A micro-founded general equilibrium model with heterogenous agents quantifies the gains from narrowing education gaps. The model is part of a new wave of heterogenous agent models built by IMF staff that allow for the analysis of gender-related policies and their impact on macroeconomic outcomes. Simulations of different sets of policies using distinct versions of this framework so far have estimated to boost long-run GDP by 26 percent in Iran (narrowing the wage gap; IMF (2018)), more than 1 and 7 percent of GDP in Argentina (policies to reduce the tax-wedge and addressing reducing discrimination in the formal sector, respectively (IMF 2017)), and more than 8 percent of GDP in Senegal (for a policy that would ensure 5 years of schooling for everybody (IMF 2019)). Depending on the policy, a new steady state with changed policy scenarios with could be interpreted as being achieved within the same generation (when immediately impacting adults) or one generation (in the case of education as children need to grow up to join the labor market).

12. The model is calibrated to match the main features of the Nigerian economy. These features include labor market outcomes (participation, income), the distribution of income, and education (in years of schooling), gender inequality, and the government:

13. Four scenarios give a gradual picture of possible gains from higher education, reaching up to 12 percent of GDP (and higher levels for more ambitious policies not shown here) (Figure 6):

14. This section provides pointers to recent reforms in the education and health sector and policies to address gender inequality. The challenges in the health and education sector, including with respect to gender inequities, and the possible gains of addressing them motivate the question of recent policy initiatives by the government in these areas—a selective description of which is provided in the following.

15. The government has taken a number of recent initiatives to improve health outcomes.

16. There have been several initiatives of varying scale by the government to improve education outcomes. The government has developed and launched a Human Capital Vision document in collaboration with state governments and development partners. A number of targeted programs are ongoing, for instance:

17. The government also put in place a number of policies to promote gender equality, including to promote women’s education and economic empowerment. The National Strategy to End Child Marriage in Nigeria (2016) aims at changing harmful practices and contributing to improved access to education. The government developed National Action Plan on Gender, a gender policy for the Nigeria police sector, including police stations equipped to address gender base violence, and a National Gender Action Plan for the Agricultural Sector (2018). Improving education for girls is one of the three strategic priorities of the Ministry of Women Affairs and Social Development.

18. A comprehensive reform to improve quality and efficiency of services in the education sector needs to be supported by improved health outcomes, in particular for children Addressing Nigeria’s vast education challenge will without doubt require increasing resources to invest these priority sectors. However, it will also require other reforms and a reorientation of the education system, including through a package of the following reforms (World Bank 2018). These reforms include, for instance:

19. Policies to address gender gaps should be a critical element in improving health and education, including to ensure improvements to access in services benefit all. Selected policy recommendations include:

Prepared by Vivian Malta (SPR) and Monique Newiak (AFR). This selected issues paper has benefited from comments received during presentations and discussions with government officials, in particular the Federal Ministry of Health and the Federal Ministry of Education, Ministry of Women Affairs and Social Development, and development partners (High Commission of Canada, UNICEF, the Norwegian Embassy and Plan International) in Nigeria, and comments by the World Bank (Muna Salih Meky). We also thank Claudia Berg, Lisa Kolovich and Brooke Tenison for valuable inputs. Policy recommendations on health, education and gender are aligned with recommendations made by the Nigeria development partners group.

Drawing heavily findings and policy measures by the Department for International Development, the World Bank, UNICEF, UN Women and other development partners. 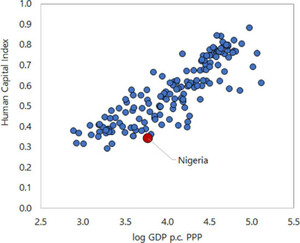 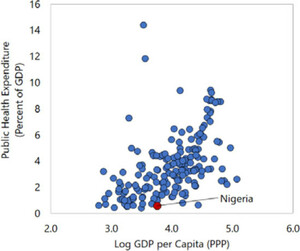 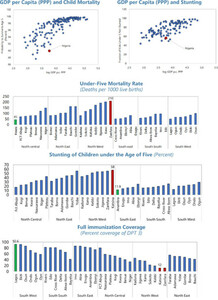 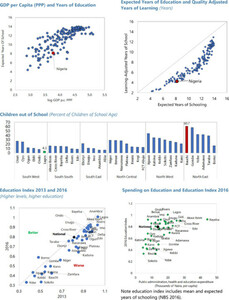 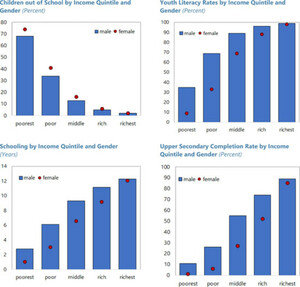 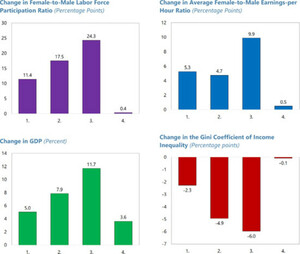