The implicit cost of fuel subsidies is significant. Analysis based on Nigerian household data shows that a removal of the implicit subsidy (through an increase in the regulated price of Premium Motor Spirit, PMS) would reduce income inequality and, if combined with targeted transfers, could result in a decrease in the poverty gap while leaving significant fiscal space for other productive expenditures. To avoid a re-emergence of fuel subsidies, a deregulation of fuel pricing or the implementation of an independent and automatic fuel price-setting mechanism will be necessary. In the interim, the cost of currently below-cost recovery regulated prices should be explicitly stated in the budget.

1. Nigeria’s regulated price for PMS is no longer cost-reflective and is lower than in most comparator countries. In May 2016, faced with fuel shortages and severe external and fiscal pressures, the Nigerian government increased the regulated fuel price significantly (by 68 percent, to Naira 145 per liter)—making the level appropriate in the context of premium gasoline prices of just above US$500 per ton at then prevailing oil prices of US$45 to US$50 per barrel and exchange rate of 197 Naira/US$. Since then, the price of PMS has remained unchanged. Oil prices are now hovering above US$60–65 per barrel, Rotterdam Platts prices increased, and the exchange rate has further depreciated in windows reflective of market rates, while fuel imports are still priced at 305 Naira/US$. As a result, the regulatory fuel price cannot fully cover the cost of fuel importation and distribution. Oil companies in the downstream business have relied on their allocation of fuel imports by the national oil company (NNPC) for distribution. The cost incurred by the NNPC in absorbing below market costs results in lower net oil revenue transfers to the federal government and reduced transfers to state and local governments. In contrast, fuel prices in comparator countries have increased significantly, and are on average substantially higher than in Nigeria.

2. As a result, implicit subsidies have increased markedly; removing them would increase fiscal space. In 2018, the cost of delivering a liter of Premium Motor Spirit has exceeded the regulatory retail price of Naira 145 by some 40 percent. At this level of price under-recovery, and assuming consumption of about 37 million liters in Nigeria per day, the implicit cost to the budget could amount to 0.5 percent of GDP in 2018, compared to just 3 to 4 percent in tax revenues), and even 0.9 percent of GDP under publicly announced import numbers of 55 million liters per day that are used to build strategic reserves and are to a large extent diverted through smuggling into neighboring countries. The exchange rate margin created through pricing fuel imports at N/US$ 305 instead of the market rate (N/US$ 360) creates an additional implicit subsidy that is not accounted for in the analysis but would add around 20 percent to the cost. A removal of subsidies would therefore imply increased fiscal space.

3. However, a price adjustment would reduce households’ purchasing power, calling for an analysis of the impact by income groups, in particular for poorer households.

5. The cost of measures to mitigate the adverse impact on the poor are relatively small and would amplify the reduction in income inequality from the price increase.

6. The impact of an increase in PMS prices is thus expected to be overall positive if compensatory measures to protect vulnerable households are introduced. In addition, these effects do not take into account a number of other positive implications of the price increase in productive fiscal expenditures (e.g. infrastructure) that could have positive growth and distributional implications that would help compensate for adverse effects on demand from higher input costs, which are not taken into account in this analysis.

Decomposing the Cost of One Liter of PMS

Fares and other Transport Expenditures by Income Percentile

Distributional and Poverty Impact from a Regulatory Fuel Price Increase 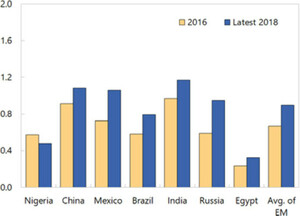 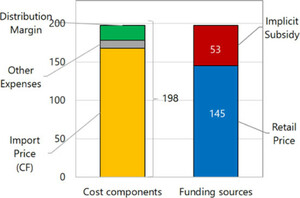 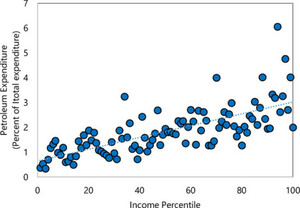 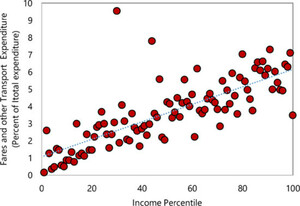