Sharing the Dividends of Growth1

1. The WAEMU has been one of the fastest growing regions in sub-Saharan Africa for the past decade. Average growth in the region is projected to exceed 6 percent for a seventh consecutive year in 2018, despite security concerns and terms-of-trade shocks. This growth spell begs the question as to what extent have the benefits been shared across the population and translated into better development outcomes, such as better health, education, lower poverty and inequality, and other indicators targeted at achieving the sustainable development goals (SDGs).

3. In the WAEMU, addressing the above inequities could thus be an avenue to boost diversification, growth and stability, while moving towards achieving the SDGs. As argued in Hooley and Newiak (2015), population growth in the WAEMU provides the opportunity to boost future growth. Countries that have seen an increased number of entries into the labor market amidst declining fertility rates have experienced declining dependency ratios—a prerequisite for the demographic dividend. However, while declining dependency ratios are a necessary condition, they are not sufficient: Human capital accumulation, through better education and health services, is critical to allow workers to take on higher-productivity tasks.

4. Scope of this paper. This paper provides an overview of the state of poverty and inequality of income and opportunity, including between men and women, in the WAEMU, quantifies the impact of these inequities on growth and economic diversification, and suggests some policy measures at the national and regional level.

5. Average poverty has decreased in the WAEMU but has remained high compared to benchmark Asian and African countries (Figure 1). The latest poverty statistics indicated that the average poverty headcount ratio at US$ 1.90 per day—the international extreme poverty line—has decreased by 19.2 percentage points compared to the early 1990s. Although extreme poverty has significantly declined in the WAEMU, about 42 percent of the population still lives on less than US$ 1.90 per day and about 75 percent (90 percent) lives on less than US$ 3.20 (US$ 5.20) per day. Average poverty rates in the WAEMU remain higher than those of benchmark Asian and African countries with long episodes of growth acceleration.2 However, the latest data suggest that the average extreme poverty rate in the WAEMU remains about 13 percentage points below that of benchmark Asian countries when the latter were at the same level of GDP per capita.

7. Poverty in the WAEMU is higher in rural area than in urban area. The average poverty rate in rural areas is almost double that of urban areas, reflecting inequality of opportunities within those areas.3 Figures on the intensity of poverty—poverty gaps at national poverty lines—suggest a similar picture.

10. The average decrease in extreme poverty has not been accompanied by an improvement in income and gender inequality of similar magnitude. Average income inequality in the WAEMU, as measured by the net Gini coefficient, has decreased by only 1.8 percentage points between 1990 and 2015, a lower performance compared to the average decrease in extreme poverty. In addition, the level of income inequality in the WAEMU remains higher than those of benchmark countries, including when those countries where at the same level of GDP per capita. Income inequality has decreased in four countries (Burkina Faso, Mali, Niger, and Senegal). However, it has also increased in four others (Benin, Cote d’Ivoire, Guinea-Bissau, and Togo), reflecting the above trend in extreme poverty.

B. The Constraints: Human Capital and Inequality of Opportunity

12. Indicators of human capital suggest large gaps in health and education. According to the latest findings of the World Bank’s Human Capital Project, WAEMU countries’ level of human capital index, capturing a number of health and education dimensions, ranks at the bottom of countries worldwide, with particular challenges in Mali and Niger—which rank among the bottom three countries, just after South Sudan (Figure 2, panel 1). These outcomes have been driven by challenges in both education and health.

13. Education outcomes vary widely across WAEMU countries, suffer from quality issues, and access to them within the population is very unequal.

14. Health outcomes have improved significantly but major challenges remain, in particular, for children. Under-five mortality rates have declined significantly, and are now on average about half the level of above 200 deaths per 1,000 live births observed in 1990. However, current ratios still imply that more than one in ten children die before reaching their fifth birthday in Mali, and seven to ten children in hundred children die in the remaining WAEMU countries, with the exception of Senegal (less than 5 deaths per 100 children) (Figure 3, panel 1). 17 (Senegal) to 42 (Niger) percent of children suffer from stunting (Figure 3, panel 2). Maternal death ratios have declined, from an average of above 7 percent to below 5 percent, but still imply that a mother dies in every 20th live birth (Figure 3, panel 3). Adolescent fertility rates are among the highest worldwide (Figure 3, panel 4). At the same time, health expenditures have been among the lowest worldwide (Figure 3, panels 5 and 6), both as a ratio to GDP and per capita.

15. In most countries, several inequities in the legal system constrain women from being economically active (Table 1).4 For instance, in Mali, the law requires women to obey their husbands. Some countries differentiate between men and women in the ownership of property (Côte d’Ivoire and Guinea-Bissau) or inheritance rights (Senegal), constraining women’s ability to access finance (Deléchat and others 2018), including as collateral requirements remain high, and impeding women’s economic activity (Gonzales and others 2015a; Figure 4).5 In half of WAEMU countries, the law does not mandate equal pay for equal work. In countries where women are at the center of the economy with a high participation rate in the labor market—as in Burkina Faso, they still have unequal access to decent and quality formal jobs. In addition, some laws support early marriage and child bearing by allowing girls to get married legally as early as 14 with parental consent. In a few countries, authorizing child marriage is not punishable by law.

C. The Impact: Quantifying the Impact of Inequality and Education on Growth and Diversification

17. This section quantifies the effect of income and gender inequality and education on growth of GDP per capita and diversification in the WAEMU, relying on econometric analyses from the literature. More specifically, it uses the estimated coefficients of income and gender inequality and years of schooling in econometric analyses done in IMF (2015) and Kazandjian and others (2016) to quantify the average annual GDP per capita growth and export diversification that could materialize if WAEMU income and gender inequality and education levels were to reach those observed in benchmark African and Asian countries. The estimated coefficients from IMF (2015) are drawn from growth regressions that rely on a broad sample of 115 countries over the period 1995–2014. Those growth regressions control for the commonly used growth determinants including initial income, infrastructure, investment, inflation, institutional quality, and terms-of-trade. The coefficients from Kazandjian and others (2016) are drawn from estimates of the effect of gender inequality on diversification using a large panel of 107 countries for the period 1990–2010 and controlling for other determinants of diversification. In both IMF (2015) and Kazandjian and others (2016), the well-known endogeneity concern is addressed using the generalized method of moments (GMM).

18. The results indicate that the WAEMU’s real GDP per capita growth rate and diversification could significantly benefit from decreases in income and gender inequality and improvements in education opportunities (Figure 6). Bringing the average level of income inequality in the WAEMU to the level observed in benchmark countries could potentially increase annual real GDP per capita growth by about 0.2–1.4 percentage points. In the same vein, closing gender inequality and female legal equity gaps has the potential to boost annual per capita income growth by about 0.2–0.5 percentage points. The results also suggest that differences in years of schooling could explain about 0.3–0.5 percentage points of the WAEMU’s income per capita growth rate shortfall compared to benchmark countries. A similar picture emerges for diversification, as reducing gender inequality gap relatively to African and Asian benchmark countries are also found to increase export diversification index by about 0.2 and 0.4 units, respectively (Figure 7). The magnitude of this effect is relatively large, as it is equivalent to up to about 1/4 standard deviations of the index across low-income and developing countries.

19. A number of national policies are appropriate to increase economic opportunity for a wide range of the population:

20. Regional policies, guidelines and monitoring could help with the implementation of these policies. These include:

Prepared by Hippolyte Weneyam Balima and Monique Newiak. The paper has benefited from comments from Bruno Versailles, Johnson Nkem Ndi and Yaindy Nuesi Bautista (UN Women), and colleagues from Benin and Guinea-Bissau teams.

A recent paper of Malta and Tavares (2019) provide a interesting analysis of gender gaps in education and labor market in Senegal.

For instance, Niger still relies on a colonial version of the civil law that does not allow married women to open a bank account without the permission of their husbands (World Bank, 2018).

For a reference on building fiscal space in the WAEMU, see Barhoumi and others (2016).

WAEMU: Trends in Poverty and Inequality

WAEMU: Gender Gaps in Economic Activity and Access to Finance 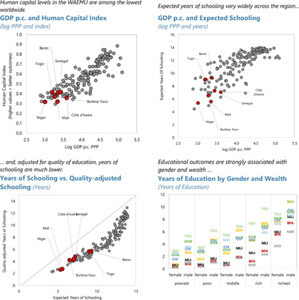 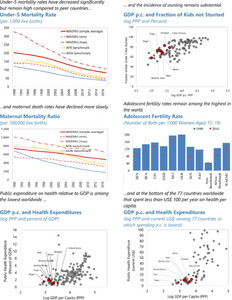 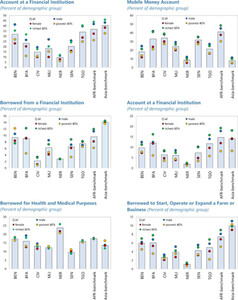 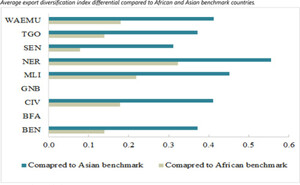