Approval of the name change by the Macedonian parliament. On January 11, 2019, the authorities secured the required two-third-majority in the Macedonian Parliament to support the third and final approval of the constitutional changes related to the bilateral Prespa agreement with Greece. The bilateral agreement will also have to be approved by the Greek Parliament to become valid, after which the country’s official name would become “Republic of North Macedonia”. Resolution of the decades long dispute would bring the country closer to NATO membership and opening of EU accession negotiations.

Preliminary 2018 fiscal outcome. Preliminary numbers received from the authorities indicate that the overall fiscal deficit for 2018 is estimated to have reached -1.8 percent of GDP, significantly lower than what was envisaged in the supplementary budget approved late last year (-2.8 percent) or in staff’s projections (-2.6 percent). This is mostly attributable to the overall large under execution of capital expenditures (1 percent of GDP) and goods and services spending (0.5 percent of GDP), although these have partially been offset by weaker-than-budgeted non-tax revenues and grants. Meanwhile, tax revenues came out as budgeted with strong personal income tax and social security contributions collection at the end of the year. Staff continues to review this information. These developments do not materially affect staff’s baseline projections as a catch-up in capital spending is not expected in 2019, but pose risks of higher under-execution of capital spending due to weaknesses in project documentation and delays in tendering. 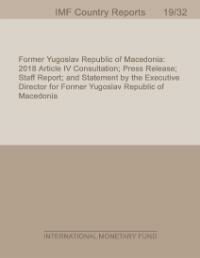