Is There a Middle-income Trap? Singular Growth Patterns in Panama1

In light of Panama’s continually strong growth in recent decades, this paper investigates the relevance of the “middle-income trap” for Panama and its prospects for maintaining strong growth in the future. It finds that following the political stabilization in the 1990s, Panama experienced stellar growth performance that brought it closer to moving from the middle to the high-income bracket. However, international evidence suggests that maintaining high growth rates may prove increasingly challenging for countries at Panama’s current level of income. In this context, the paper argues that Panama’s prospects for maintaining buoyant growth critically depends on continued productivity growth underpinned by comprehensive reforms focused on improving education quality, attracting talent, and continuing to enhance the investment climate.

1. Panama has been one of the fastest-growing economies in the world in recent years. Real GDP growth averaged over 6Â½ percent over the last decade, significantly higher than Latin America and the Caribbean (2.4 percent) and the group of emerging markets and developing economies (5.4 percent). In turn, such stellar growth performance has contributed to a significant improvement in living standards and a reduction in poverty.

3. The paper looks at the relevance of the middle-income trap in Panama. The paper is organized in six parts. Following the introduction, section B puts Panama’s growth experience into perspective. Section C looks at countries’ mobility to higher income levels and the relevance of the “middle-income trap”. Section D provides some international evidence from other countries’ performance when they reached Panama’s level of income per capita. Section E looks at prospects for sustainability of Panama’s growth. Finally, Section F provides some concluding remarks.

4. Panama experienced both episodes of growth convergence and divergence over the past several decades. Using data from the WEO database, Figure 1 depicts average growth over each decade (1960–1990) against the level of income per capita (at the start of the decade). The shaded area shows the set of countries with income per capita higher than Panama’s that also experienced stronger growth. The figure suggests that Panama had relatively strong performance and convergence toward higher-income countries in the 1960s, with only a limited number of countries outperforming (Figure 1, panel a). However, the set of countries outperforming Panama (in the shaded area) grew rapidly, and Panama’s growth was significantly below most countries at its or higher income levels in the 1990s, a decade marked by instability in Panama (panel c).

5. Panama’s economy embarked on a path of rapid growth since the political stabilization in the 1990s. Figure 2 shows that the 1990s were a turning point when economic growth started accelerating following the continued decline over the 1970s and the 1980s. Economic growth averaged over 5 percent in the 1990s, bringing Panama back to the club of the rapidly-converging economies. A significantly smaller set of countries at comparable or higher levels of income per capita managed to grow faster, as shown by the shaded area. In addition, this set of countries outperforming Panama continued shrinking in the 2000s (the immediate period after the transfer of the Panama Canal to Panama on December 31, 1999). Finally, in the most recent half-decade (2010–15), no country in the world at comparable or higher level of income per capita achieved higher growth than Panama (as shown by the empty shaded area).

8. Within the middle group, some countries have been converging toward the US level, while others have not. The green triangle contains the subset of relatively better performers among the countries trapped in the middle bracket over the period 1970–2015. These countries, including Panama, managed to narrow the gap relative to the U.S. income level, but fell short of exiting the middle group. On the other hand, the income gap relative to the U.S. widened for the subset of countries trapped in the red triangle.

Panama’s stellar performance since 1990 has brought it close to moving from the middle to the high-income bracket. Figure 4 indicates that Panama’s distance from the upper bound of the middle-income bracket has been significantly reduced. In addition, there was no country (except for Equatorial Guinea) that overtook Panama in narrowing the gap with respect to the U.S. income level – the empty reddish shaded area shows that countries with lower income per capita in 1990 also remained below Panama’s income level in 2015.3

D. Evidence from Past Episodes

9. Does empirical evidence support the key proposition of the middle-income trap that countries’ growth moderates considerably after they reach certain level of income? Figure 5 investigates this issue using data from the WEO database for countries that reached a level comparable to Panama’s level of GDP per capita in constant US$, adjusted for purchasing power parity. Panama’s income level in 2017 was about US$21,000 constant year-2011, which is used as a threshold for identifying the growth episodes to be included in the analysis. In total, the analysis is based on 38 such episodes over the period 1970–2017. Figure 5 shows growth trajectories for these selected country episodes in the first 10 years after they reached the threshold (and did not revert back below the threshold over that period).

10. Average growth moderated after countries reached Panama’s level of income per capita. Average growth for the set of country episodes after they reached Panama’s per capita income level (i.e., US$21,000 in constant year-2011, PPP-adjusted) dropped from 5.3 percent to 2.9 percent 10 years afterwards.4 While such evidence is indicative (and deeper analysis is necessary to understand the growth dynamics in a more comprehensive manner), it still suggests that growth is likely to moderate after countries reach certain level of income and their convergence gap has narrowed.

11. Growth contributions from labor and capital are likely to moderate over the medium term. With the gradual decline in population growth, labor’s annual contribution to economic growth is projected to decline by about 0.3 percentage points compared to the period 2008–17. More importantly, following an extraordinary investment cycle over the last decade (2008–17) that also incorporated the expansion of the Panama Canal, the investment share in national income is projected to converge to a more sustainable level of about 40 percent (see Beaton and Hadzi-Vaskov, 2017). In that case, capital contribution is estimated to be about 1 percentage point per year lower than its average over the past decade.

12. The sustainability of Panama’s growth at high levels critically depends on continued improvements in total factor productivity, which represents a key policy challenge. Table 1 suggests that the contribution of productivity (TFP) to growth needs to increase by about 0.2 percentage points per year compared to the previous decade to maintain growth at the staff’s baseline path (average growth of 5.5 percent, about 1 percentage point below last decade). However, this may prove to be a key challenge for the Panamanian authorities – among others, such an improvement would require: (i) substantial update in skills, training and quality of education; (ii) relaxation of regulations to facilitate attraction of foreign talent; and (iii) continued efforts to improve the investment climate. Finally, the decade 2008–2017 was exceptional for Panama, and to the extent that TFP has captured unidentified factors that contributed to this singular performance beyond productivity improvements, reaching the required growth in productivity may prove to be even more challenging.

13. Following a stellar performance in recent decades, Panama’s prospects of maintaining high growth rates and moving toward the club of high-income economies critically depends on continued productivity gains. Panama’s economy embarked on a path of rapid growth since the political stabilization in the 1990s, which has brought it closer to moving from the middle to the high-income bracket. However, maintaining high growth rates may prove increasingly challenging, particularly for countries at Panama’s current level of income. In this context, enhancing productivity is key for maintaining Panama’s high growth rates over the medium term. Policies that focus on improving education quality, attracting foreign talent toward knowledge-based sectors of the economy, and strengthening the investment environment are likely to be essential for sustaining productivity growth.

Equatorial Guinea’s performance is driven by the natural resource boom.

Similarly, the median growth rate for this set of countries dropped from 4.7 percent in the year when they reached the threshold to 3.1 percent ten years afterwards.

(income per capita relative to the U.S., log of percent)

Panama: Exit from the Middle-Income Trap

(income per capita relative to the U.S., log of percent) 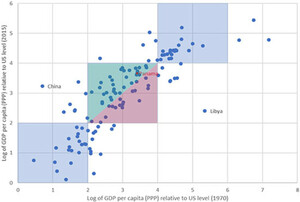 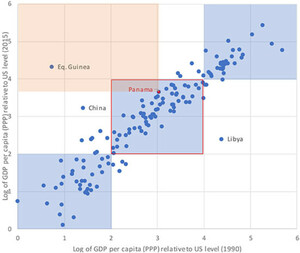 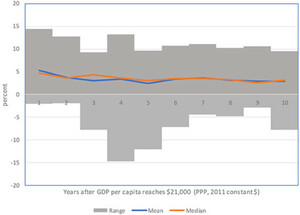 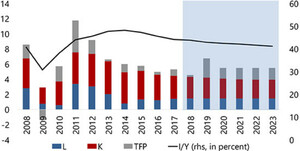