Lackluster nominal wage growth has frequently been highlighted as a key reason for Japan’s continued struggle to reflate the economy. This chapter takes a closer look at why wage inflation has been missing in Japan. The empirical results suggest that while cyclical factors (e.g., labor market slack and inflation expectations) play an important role in driving wage growth, the main reason for the “missing wage inflation” is the downward pressure exerted by structural factors (e.g., dual labor market effects and wage rigidities).

1. Wage inflation in Japan has been largely absent since the mid-1990s. Annual wage growth fell sharply following the bursting of the asset bubble in the early 1990s. By the end of the decade it had dropped below zero (see figure). The lackluster wage growth continued between 2000 and 2007, and remained in negative territory during the initial phase of the Global Financial Crisis (GFC). In the post-crisis era, however, wage growth has been on a slight upward trend. Nevertheless, wage growth remains well below the government’s three percent goal, and continues to pose a major roadblock to the Bank of Japan’s (BoJ) efforts to reflate the economy. The low wage growth is particularly puzzling given the sharp drop in unemployment in recent years, triggering renewed interest in finding the causes for this “missing wage inflation” (e.g., Iwasaki et al, 2018; Bank of Japan, 2017).

2. This chapter attempts to shed light on why wage inflation has been missing in Japan, distinguishing between cyclical and structural drivers. By estimating a set of wage Phillips curves (WPCs)—augmented with structural factors—several interesting results emerge. First, unemployment and inflation remain key drivers of wage growth. Second, the response of wage growth to labor market slack exhibits downward rigidity, causing the slope of the WPC to flatten at higher rates of unemployment. Third, the pass-through from productivity gains to nominal wages is economically significant. Fourth, labor market duality tends to negatively affect wage growth through its “composition effects,” but more importantly by flattening the WPC. Finally, distinguishing between cyclical and structural factors, the absence of wage inflation in recent years, despite labor market tightening, is due primarily to structural factors—the lack of price pressure on consumer goods has meant less upward pressure on wages.

A. Cyclical and Structural Drivers of Wage Growth in Japan

3. Nominal wages appear responsive to economic fluctuations, but the relationship changes over the business cycle and over time.

4. Trend productivity growth has likely also influenced wage growth dynamics. Holding wages and prices constant, the more productive workers are, the lower is the cost of producing one additional unit of output. The consequent increases in profit per unit of output, encourages firms to expand production and hire more workers. Eventually, wages will be bid up and the cost per unit of output rises to reflect the higher level of labor productivity. Hence, we would expect nominal wage growth and trend labor productivity growth to be positively correlated. This prediction appears supported by the unconditional correlation between the two variables (see figure).

6. Several WPC specifications are estimated to assess the relative importance of cyclical and structural drivers of wage growth in Japan. The methodology follows IMF (2017), but is extended to incorporate downward wage rigidity and dual labor market effects. Table 1 displays the results from five different WPC specifications.

7. Overall the empirical results suggest that both cyclical and structural factors play an important role in driving wage growth in Japan.

9. The empirical results presented in this chapter indicate that both structural and cyclical factors are important drivers of wage growth, although they tend to work in opposite directions. Despite reduced labor market slack in recent years, wage inflation has only showed a slight pick-up. Estimation of the wage Phillips curve (WPC) augmented with structural drivers, shows that the main reason for this “missing wage inflation” is the downward pressure exerted by dual labor market effects and wage rigidities. The flattening of the WPC due to the large share of non-regular workers has been a particularly important drag on wage growth. However, looking forward, as the pool of untapped non-regular workers wanes and their labor supply elasticity rises, the WPC may steepen.

10. The results also highlight the importance of implementing a comprehensive and coordinated policy package to kick start wage-price dynamics and address labor market duality. Reducing the negative effects from labor market duality could have a significant impact on wage growth both by reducing the wage gap between regular and non-regular workers (i.e., reversing the composition effect), but also by making demand stimulus more effective through a steepening of the WPC. Higher wage growth would in turn help stimulate demand for goods and services and lead to higher inflation, which would feed back into higher wage growth. Income policies to boost wages could also provide an initial boost to wage growth, but have to be backed by significant demand support to be successful.

Watanabe (2017) suggest that the motivation for the labor market reforms in the late 1990s and early 2000s reflected the need by Japanese companies to increase functional flexibility and decrease production costs in response to intensified regional economic competition.

Bank of Japan (2018) finds that the wage elasticity of labor supply of female and senior part-time workers is higher than working aged men, and argues that this has reduced the impact of increased labor demand on wages.

See Gali (2011) for a theoretical derivation of the negative relationship between labor supply elasticity and the slope of the WPC.

Dummies for VAT rate increases in 1997 and 2014 are also included in all specifications. Results indicates that while the 1997 VAT rate rise did affect wages positively, the 2014 VAT rate increase did the opposite. 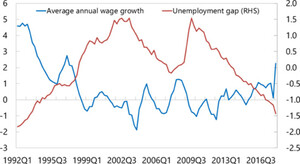 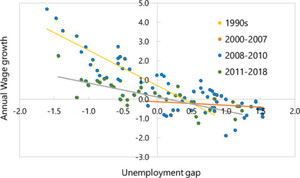 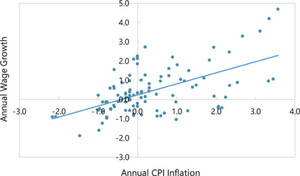 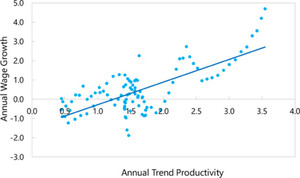 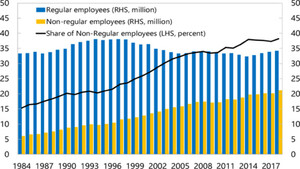 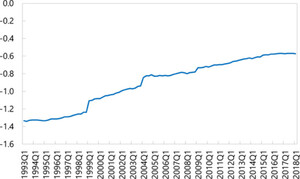 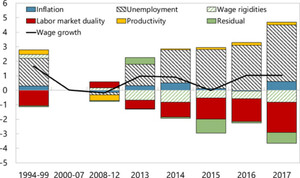